12 upcoming games without names that we’re excited about

Creative Assembly has a lot of range. From the Total War series to Alien: Isolation and the recently announced tactical PvP shooter Hyenas, it seems capable of just about anything. That in mind, it seems only right to be excited for CA's two mystery projects. First, there's a ‘new action game’ being developed by the Bulgarian wing in capital city Sofia. Job postings for the game include gameplay programmers and technical designers.

Earlier still Creative Assembly posted job openings for an even more mysterious project, with very little details given outside of the listings for a senior gameplay programmer, lead technical designer and project technical director. Key roles, so it’s reasonable to assume that it wasn’t very far in development when the job postings went up in May.

Estonian underdog studio ZA/UM bet the farm on Disco Elysium, and the mad gamble paid off. Now equipped with funding, ZA/UM's got another game in the pipeline. Details are limited, but an early job posting for an environment artist mentioned some juicy facts about the project. The artist it's looking for has an understanding of city planning and architecture, a love of all things sci-fi and space-based, and an understanding that “there are more things in heaven and earth than are dreamt of in philosophy.”

Whether this means that the next project is branching off into a new setting entirely, or further expanding the slightly dreamlike alternate Earth of Elysium is anyone’s guess. Current job postings on the ZA/UM site include vacancies for a lead game designer (a juicy sounding role), plus Unity-based development roles, including a space open for a senior Unity gameplay programmer.

Working title: None known (but it IS a Witcher game)
Previously covered: September 2022

With the TV adaptation on its third season, the card-battling spinoffs doing well and the third main game still drawing crowds on multiple platforms, it’s no surprise that CD Projekt Red is returning to the world of The Witcher.

We know the game won't technically be called The Witcher 4, but that's all we have to go with for now. We’re looking at a major new game set in the Witcher universe in production, and CDPR's said that it’ll be running on Unreal Engine 5. A single teaser image on CDPR’s site also gives us one interesting detail—that’s not Geralt’s wolf medallion, but rather the emblem of the School Of The Lynx. They're a sect of witchers previously only seen in fan-fiction. A potentially intriguing plot hook, suggesting that Geralt will not be the focus of this new story.

Way back in 2016, League of Legends studio Riot aimed to expand its horizons by buying out several smaller studios, including Radiant Entertainment, developers of the promising looking indie fighting game Rising Thunder.

Project L is that crew’s League of Legends fighting game spinoff. While it's yet to nail down a final title, everything else about ‘Project L’ looks to be coming together nicely. It was unveiled fully in August, with a developer diary video and several gameplay clips. Riot also confirmed that (as with League) it’ll be free-to-play.

While we don’t have any hard details on Project L’s combat mechanics, I’d be surprised if it completely left behind Rising Thunder’s biggest idea: That special moves could be performed with a single button and limited by a short cooldown, similar to a MOBA like (you guessed it) League of Legends. The idea was to make the normally execution-heavy genre more accessible to newcomers, and it’s one I’d like to see return.

Riot’s other, much bigger (and more secret) project is an upcoming MMO set in the League of Legends world of Runeterra. First quietly teased in 2018, executive producer Greg Street recently confirmed that the project is alive and “going great.” Still, don’t sit around waiting to play this one, as Street mentioned that the first playtests “won’t be soon.” Personally, I’m more interested in the fighting game.

Announced during this summer’s Xbox & Bethesda Games Showcase, there are almost no concrete details on this project yet. Kojima did talk up “Microsoft’s cutting edge cloud technology,” though, and said that the game has been in production for some time already. It also seems unlikely that this is the still-officially-unannounced Death Stranding 2, which we know about because Norman Reedus is just too excited for the project.

Blizzard is not a studio to be rushed. Its last wholly new game was Overwatch, released in 2016. Its next looks to be some kind of fantasy survival sandbox, based in what looks like an all-new fantasy setting, if the singular piece of teaser concept art is anything to go by.

The accompanying job postings mention that the game will be a big-budget triple-A release for both PC and consoles, but very little else. Hiring back in January was extensive though, with a whole crew of mid-to-high level roles up for grabs in art, design and software engineering.

Max Payne and Control studio Remedy have a lot of irons in the fire, including a sequel to Alan Wake, a combined remake of Max Payne 1 & 2 and a likely (if yet to be fully confirmed) sequel to Control. It also has two more mysterious projects: a multiplayer-focused Control spinoff, plus a free-to-play shooter codenamed Project Vanguard.

We know the most about Project Condor. There’s a single teaser image, but Remedy feels it “tells pretty well what Condor is about.” So, we’re probably looking at a four-player co-op game about a squad of overworked, underpaid agents out hunting for otherworldly threats to bag, tag and drag home to the Bureau Of Control. It’s such a fun setting that I’m eager to see what day-to-day life is like for the grunts without magic powers and shapeshifting superweapons.

We know less about Project Vanguard, beyond an intentionally vague project site (billing it as an Unreal 4-based ‘multiplayer live game’), and that it’s to be released under the banner of Chinese mega-label Tencent. It also seems that it was delayed, according to a recent business news post on the studio. This may be due in part to the muted critical reception to Remedy's solo campaign for CrossfireX for Xbox, another Tencent property.

Fresh from cutting its teeth on the rebooted Wolfenstein series, Machinegames look set to deliver us a fresh set of virtual Nazis to shoot, punch and (presumably) whip into submission. Details here are thin, beyond confirmation of the license.

The new game will be published under Bethesda’s banner (now a subsidiary of Microsoft) and there’s a moody teaser trailer with some interesting tidbits laying around on Indy’s desk. Lots for fans to chew on but nothing concrete, with a few of the items just feeling like cheeky easter eggs rather than hints on the game’s setting. Still, it’s been a while since we’ve had a good Indiana Jones game, and I trust MachineGames to deliver.

IO Interactive couldn't have picked a much more fitting follow-up to the Hitman trilogy than James Bond, and after years (decades, really) of mediocre Bond games, our expectations are high for this one. It was announced in late 2020 and hasn't been seen or heard from since, but it's probably still got another year or two of development to go, given how detailed IO's games tend to be.

We know a bit about it already: IO's official site says Project 007 will be “a wholly original Bond story” and, more specifically, an origin story. IO's vacancies show it's hiring for numerous roles on Project 007 as well as another unannounced game. Wonder what that one could be?

Of all the games here, this is the one we’ve got the most information about, which makes the existence of PUBG publisher Krafton’s ‘Unannounced Project’ page feel a little ironic, especially as it leads with a grim and gory ‘visual concept trailer.’

What we’re probably looking at here is some manner of RPG, action or otherwise, based on the Korean fantasy best-seller The Bird Who Drinks Tears. The trailer features the novel’s protagonist, Kagan Draca, out hunting for Nhaga, a cold-blooded reptilian species that he has sworn vengeance against.

The project site also mentions that Kagan fights alongside a Rekkon warrior (a species of, uh, massive anthropomorphic chickens) and a Tokebi sorcerer (a goblin-like people), easily setting up a party-based RPG. Given that the art on the teaser site shows them traveling together, it seems the most likely trajectory for the game. A job posting also mentioned an opening for an executive producer for a ‘narrative-driven singleplayer open world game,’ which feels like another clear piece of the puzzle. 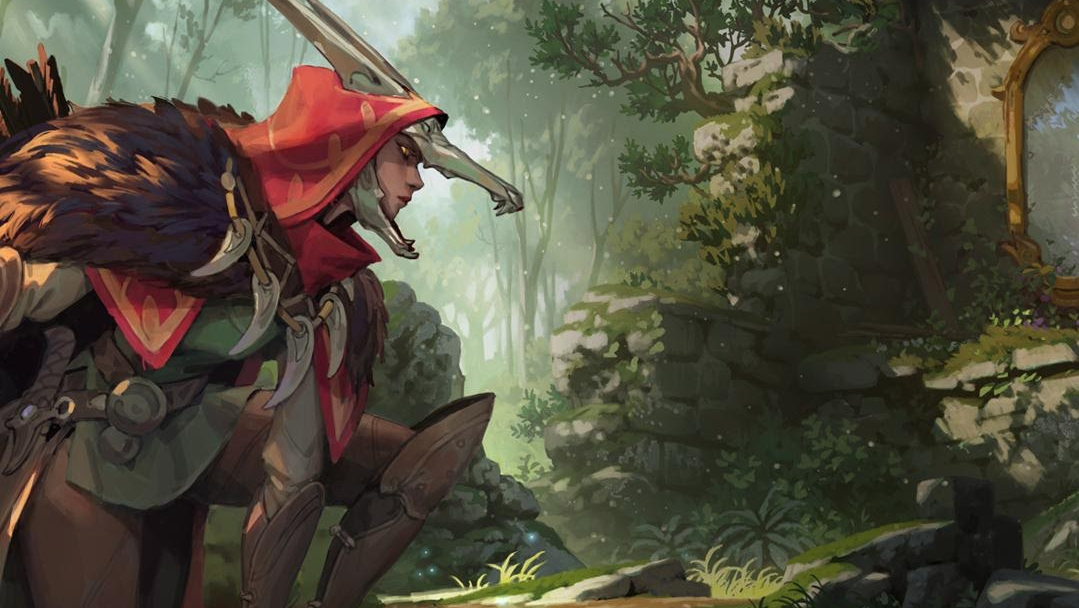