Secret Sky, a music festival put on by DJ Porter Robinson and friends. From last year's more humble beginnings, Secret Sky has grown exponentially for its second year. I, too, geared up for my second year of lockdown festivalling, rolling out a BenQ X1300i projector I'd been lucky enough to source for review just in time for the event. That was my plan: take in set after set of stellar music writ large on my apartment wall.

I'd also heard tell of a virtual reality festival experience for the Oculus Quest 2, accessible from the headset's built-in browser. This replaces an in-browser experience from the festival's first year that was pretty neat. The new VR experience piqued my interest, though, and I was hesitantly excited to try it out.

I say hesitantly because too often have I been burned by a VR experience promising something close to the real thing and not delivering anything close. In all honesty, I was skeptical of how well this would live up to expectations, too.

I needn't have been. The Secret Sky experience itself was built with the helping hand of Oculus' own devs, and I should have seen that for the heartening sign it was. This collaboration clearly kept race day hiccups down to just a few.

The actual world I inhabited reminded me of a low-rent Pokemon or Zelda: Breath of the Wild—Major Nintendo vibes, either way. A vista of rolling hills loosely facing a massive screen, on which a stream plays of the band of the moment: Kero Kero Bonito (of Bugsnax fame), Rezz, Wave Racer, Yvette Young, Laxcity, and Porter Robinson, to name just a few.

As the festival progressed, darker auditoriums replaced the bright sunlit vista to replicate that gradual descent into the headline act.

In the world I take the form of a cloaked critter, and I can move around as I please by pointing in the general direction of where I want to go and hitting a trigger. Where the magic lies is in the hundreds of other cute critters surrounding me, each one with a geotag of the country or state where they're located above their head.

I join hooded figures gathering on a single rock to gaze out over the vista as an emotional drop hits, or gather as a virtual front row fan in front of the main 'stage'. Then I jump through portals, which take me to the top of a massive tree that overlooks the main stage area, looking out, or to a mirror world pulled right out of  '90s visualiser.

Here's me vibing in the main area. The music you can hear is from dance producer salute. Oh, and if we get separated we'll meet over by the tree portal, by the big blue penguin.

Standing there, surrounded by people from all over the world enjoying the music just as you are, it's quite something. It almost feels silly to say how strangely connected I felt to those around me. I'm dancing in a dimly-lit room hundreds, if not thousands, of miles from those around me, but we're all sharing the same experience in much the same way—we're just taking it all in, man.

This is not a 1:1 festival experience, I'll admit, but that's probably a given. We're just not at the point where VR is a suitable stand-in for a eight-hour event, whatever that may be. No VR headset is comfortable enough, even, Elite Strap or no. I spent time in Secret Sky's virtual reality experience at short, intermittent intervals, taking time out to throw shapes in front of the projector.

What the Secret Sky VR experience did manage, though, was to convince me that VR doesn't make a half-bad gig platform. In fact, I think future VR headsets could make for a superb one, with a little finessing. There's a part of me that's more excited for the future of live VR experiences now than I have been about future VR games—not for a lack of innovation in the latter, I'm just convinced live music has a wealth of largely untapped potential in virtual reality.

Despite owning a couple of tickets for a gig this December, live music feels all too distant still. Even gigs of the past feel a long-forgotten memory. I had thought there to be no equivalent, either: music festivals are just one of many things on hold for the time being, and therefore it would be a long while before a speaker would once again shake these weary bones. Yet somehow, with shocking simplicity, Secret Sky managed to fill that void, and in doing so convince me that there are many uses for virtual reality yet to be explored. And, excitingly, yet to be perfected.

If future festivals offered a cheaper all-digital ticket in VR, would I choose that over the queues, beer sludge, and sweat? Most often I'll still take the in-person event, but given the option on a Monday night with nothing much on I'd probably not turn down some of the best festivals the world over, either. 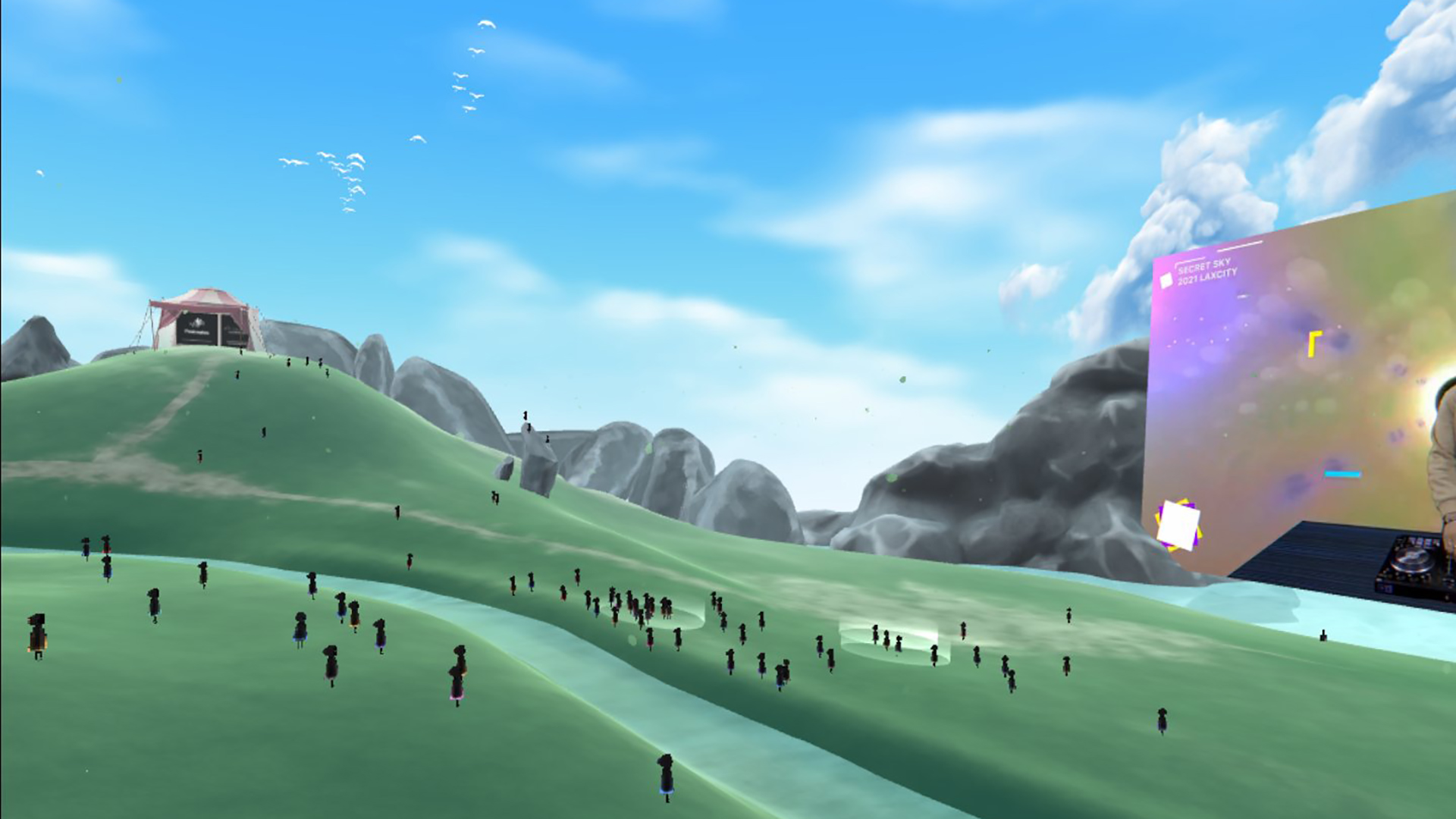