Never work with children or animals, the old showbiz adage goes. And while the sentiment doesn't usually stretch to games, it's a brave developer who would place an impulsive five-year-old at the centre of a harrowing action adventure, or try to construct logical systems atop a horde of ravenous rats. Yet Asobo Studio managed exactly that with A Plague Tale: Innocence, and its bold sequel raises the stakes with an even defter touch.

Despite the unorthodox casting of its beasts and youngsters, Innocence largely worked within boundaries set by bigger names, most notably The Last of Us. Requiem, by contrast, feels like a spread of the wings, buoyed by its predecessor's success to forge an unmistakable identity. In terms of production values among comparable titles, it still bows before Sony heavyweights such as The Last of Us Part 2 and God of War, but little else. And most importantly it grows outward from the elements that shined in the original—the palpable texture of its medieval setting, the pathos in its character relationships, and the persistent menace of the rats. By building everything up around that core, Requiem is often more compelling and relatable than its celebrated peers.

This tale begins with the survivors from the first game travelling south through France to escape the scar of the rat plague that swallowed up their home. Teenager Amicia De Rune—the player character—and her little brother Hugo are starting to enjoy life once again, frolicking in lush fields and pretending to storm an abandoned castle. Meanwhile, the children's mother and her apprentice Lucas are more concerned about getting Hugo checked out by a renowned alchemist, since the rats are after all linked to a curse in his blood, and nobody wants them showing their little furry faces again.

Naturally, the group's fortunes soon take a turn for the worse, and it's not long before you're knee deep in slurry, cadavers and beady-eyed rodents. “Nothing ever stays nice,” Hugo says, succinctly. Requiem excels in these contrasts, though, flooding the screen with vibrant joys one minute, despair the next. Innocence had moments of colour and hope too, but the Provencal and Mediterranean settings in this odyssey are blessed with sunshine, searingly green countryside and contented peasants. An early market scene embodies this spirit as well as anything, with rich yellow dyes and hot red spices adding extra warmth to the faces of joyous traders, which makes it all the more awful when things go bad.

It's not only the views but also the characters that drive the mood. Young Hugo is the star here, and his shifts of disposition from playful innocence, simply fascinated by the world, to quivering fear or destructive tantrum set the tempo of the game. That the script handles these transitions so coherently is a minor miracle, while the back and forth chatter between he and Amicia or other companions expertly reinforces the bonds between them. Your role as Hugo's protector, clinging on to his hand with sweaty intensity, torn between love and the weight of responsibility, is beautifully realised.

Of rats and men

As ever, when trouble does arrive, it comes in two flavours—people and rats. The former are always up to no good, of course, especially the powerful ones, and an unpleasant confrontation leads to fresh trauma for Hugo, which triggers the plague once more. You'll thus be cracking heads with rocks from Amicia's sling before you know it, hunted by soldiers and mercenaries, while the dark swarm starts chewing through a picturesque city, and can only be kept at bay with light and fire. Indeed, after only a few chapters of Requiem, many of the systems drip fed into the first game have already returned, leaving a large part of the adventure to explore new territory.

With all this extra room to develop, many human encounters (with or without rats) become stealth sandboxes, peppered with hiding spots, vantage points and shortcuts. These are more expansive than their equivalents in Innocence, and gift you more material to work with. Once again, you collect ingredients to craft into throwable chemical compounds, such as fire starters, extinguishers and rat bait, but it's easier to locate and combine what you need. You can also quickly switch between throwing these compounds, firing them from the sling, placing them in a ceramic pot to create an area of effect missile, and eventually attaching them to the end of a crossbow bolt. Different methods are required to distract, stun, blind or kill enemies, depending on the type of armour and weapons they're equipped with. While these options never quite match the emergent potentials of an immersive sim, there's always a lingering sense at the end of a section that you could have done things differently.

At the same time, items such as pots, bolts and quick-kill knives are in limited supply, so you can't over rely on your most powerful tools (knives in particular are best saved, since they can also prise the rusted locks off hidden treasure chests). You also need to decide when to call on the specific skills of companion characters, whether that's Lucas, Hugo or one of the new faces that join your group. In Hugo's case that can even mean taking control of small packs of rats, then moving them from a rodent's eye view as they tear through a scene munching anyone unfortunate enough to be in the way.

As for the rats, when it's just you and them, they're still in effect a part of the game's environmental puzzles, and function quite mechanically, like a living sea of lava, albeit one that can be shifted and shaped to some extent by carving out paths of light. The challenge for Requiem was always going to be keeping the chittering black mass intimidating, given how much Innocence had us exploit their predictable behaviour. To an extent it succeeds by increasing the numbers, having them erupt in tsunamis that crash through stone walls with a momentum that might even swamp and choke out valuable light sources. Toying with them can also feel more dangerous, as you might push them away temporarily, only for them to teem back as you enter what you thought was safe ground.

The real force of Requiem, though, doesn't come from any one component, more its constant motion. As situations evolve, it adds fresh ways you can interact with scenes, whether that's through new tools, different allies that tilt the tenor of encounters more towards stealth or combat, or occasional set pieces that serve up a different problem altogether. A scene where you're faced with a falconer and his deadly bird, for instance, has you creating brief distractions then zipping to the next cover point, while another has you working a crossbow turret picking off charging soldiers.

Still, there are drawbacks to all this ambition. Because the systems are broader and more organic, they have more opportunities to clash with bizarre and unreasonable results. Chucking explosive pots around or moving rats as Hugo can cause complications, as straggling predators end up in unexpected spots that you should be able to access. Partner characters, meanwhile, can get stuck on scenery (especially Lucas for some reason), and the larger ones have a habit of getting in your way with their additional bulk. A case of never work with adults.

Generally, stealth sections can be a little pernickety, with too many lines of sight to keep track of. It's an issue because once you've been seen you may as well reload the last checkpoint and go again, which can tend towards trial and error. Also, if you get frustrated by a series of such mistakes in the same area, it's often easier to quietly kill everyone rather than make an effort with stealth at all, which always seems a bit of a copout. “I don't like it, but I always end up having to do it,” Amicia explains to one of her companions after setting light to an unaware victim. You may well feel the same.

Nevertheless, it's hard to begrudge Requiem this unevenness when so much of what it does lands exactly as intended, and even in stealth sections, when you do make it through in a clean take, it can be wonderfully gratifying to sneak through the large metal door that heralds a moment of safety. Frustrations fade away in the scope of a full-spectrum action adventure that shifts gear into exciting chases, then cerebral puzzles and teamwork, confidently keeping hold of your attention for almost 20 hours.

But perhaps the most effective example of this confidence comes in the second half of the game, when it releases the throttle for a while to let you leisurely explore a Mediterranean island, a paradise of bougainvillea petals, chiming cicadas and creeping afternoon heat. The aim here is merely to spend quality time with your characters. At one point Hugo spots a tower and decides he wants to climb it. Why? Just because towers are fun to climb. It's a reminder that beneath all the death and squalor survives the wide-eyed awe of adventure, which remains at the heart of Requiem even once it darkens again and rolls towards a touching finale. And so Requiem takes us through the heights and depths of human experience, by not only working with children and animals, but letting them run the show. 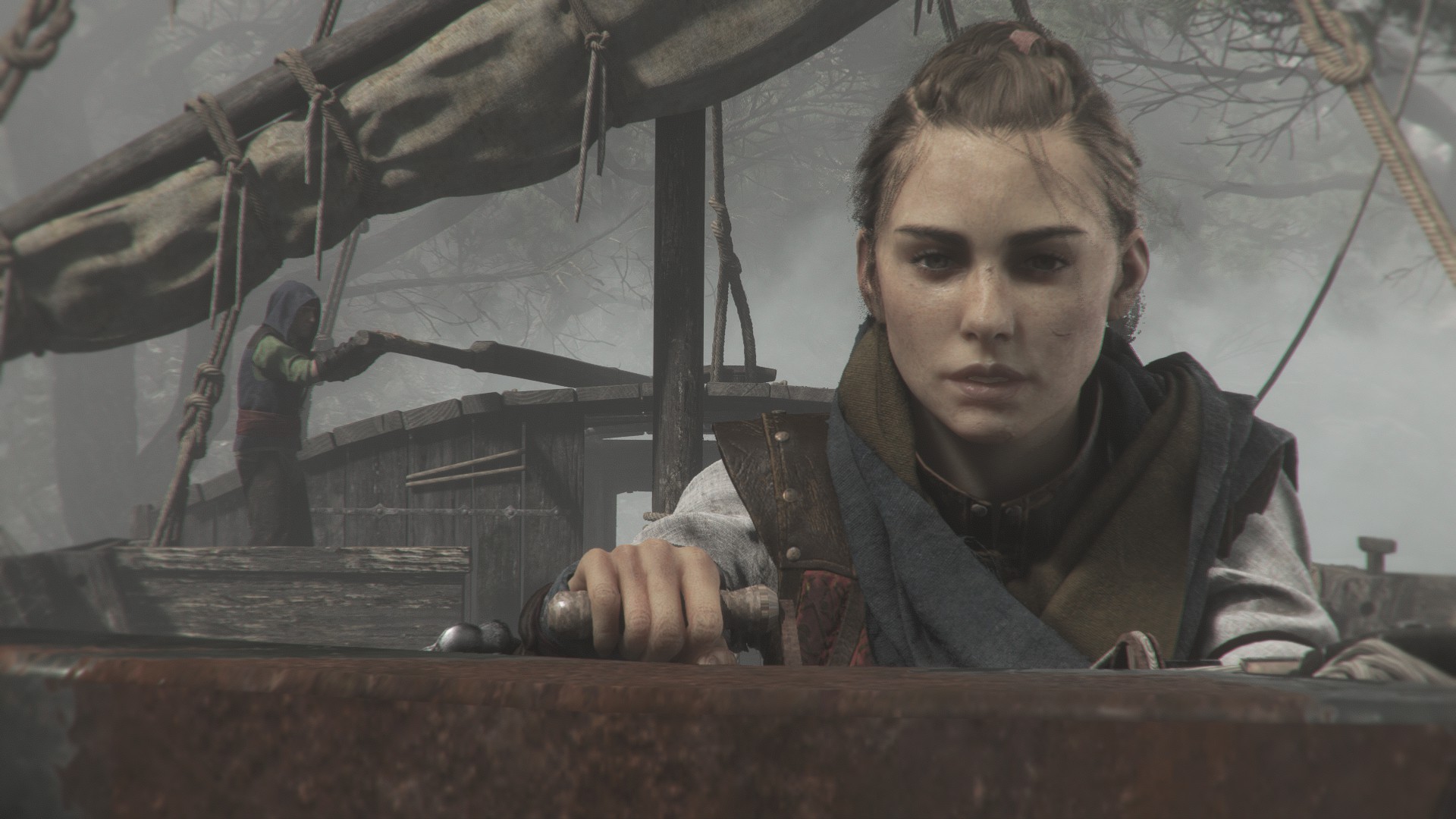 Trolli Is Bringing the Feedler to the Halo World Championship