deal on a bigger SSD in a matter of weeks. The Nitro 5 has a 2.5 drive bay in case you plan on going for a more cost-effective SSD/HDD combo as well.

The Acer Nitro 5's design is a no-nonsense affair, which is nice if you're avoiding the 'gamer' aesthetic of Acer's premium Predator series. Even with the muted scarlet trim covering the laptop's back vent, its design is very plain and could be easily confused with other plain ol' laptops. At least the Predators still manage to keep a bit of its flair on essentially the same chassis as the Nitro 5.

Much like the Predator Helios we reviewed last year, the Nitro 5's metal cover makes it feel more sturdy than years past, but I still would have wanted it all over the laptop. When you consider other gaming laptops around the $1,700 price point like the Lenovo Legion 5 Pro, the Nitro 5 feels like it wouldn't fare well in an accidental drop.

This Nitro 5 sports a fast 165Hz, 1440p display that looks great in motion when playing shooters like Call of Duty Warzone. I even dipped into playing through the new Doom Eternal DLC, and it was nice to see that the only tearing on-screen happening was Doomguy ripping some poor demon in half.

The screen itself didn't seem as bright as the 300 nits as advertised. It became more evident when playing the demo of wonderfully colorful Sable, where I was consistently trying to make the screen brighter to no avail as I was looking for parts for my cool hoverbike. The color was great, just not as bright as I hoped it would be.

Now that we've played around with a bunch of AMD Ryzen 5000 series-powered RTX 3070 gaming laptops, we're getting a sense of how well some of these machines are stacking up against each other, especially in that $1,500—1800 price range. As you can see from our benchmarks we are seeing the combination is offering up solid performance.

Out of the laptops we've tested, the Nitro 5 finds itself trading positions with the Asus TUF Gaming A15 laptop on CPU and GPU performance, which is perhaps its closest competitor. Hell, they even kind of look the same if you put them side by side. Both produce solid 1080p performance though the Nitro 5 ran significantly cooler during intense gaming, which is always a plus. Across the board, the Nitro 5 has a good dollar per frame value.

The only time we saw the Nitro 5 underperform compared to the competition was in the F1 2020 and Metro Exodus benchmarks, where it found itself at the back of the line. The underwhelming 85 minutes of battery life was a surprise as well. It's nowhere near as bad as the Alienware Ryzen Edition but still expected more from the 57.5Wh battery.

While you can game at 1440p, you're better off sticking to 1080p and turning on G-Sync to take advantage of the 165Hz display for competitive gaming. On the other hand, if you don't mind sacrificing some fps for a higher resolution, 1440p play is still viable. I was able to play Resident Village and a few matches of Apex Legends at around 110fps at 1440p, at Max settings with only a couple of dips in performance.

The main drawbacks are the dim display and flimsy chassis, which make this system feel a tad overpriced at $1,700. Even so, the powerful combo of RTX 3070 and Ryzen Ryzen 7 5800H along with speedy SSD in a system that's under five pounds is impressive.

The Acer Nitro 5 doesn't look like much, but it's a modestly powerful mid-range gaming laptop that'll check a lot of boxes for you. For others, it's a low-key laptop that they wouldn't be embarrassed to take out in public to sneakily play video games at a coffee shop. 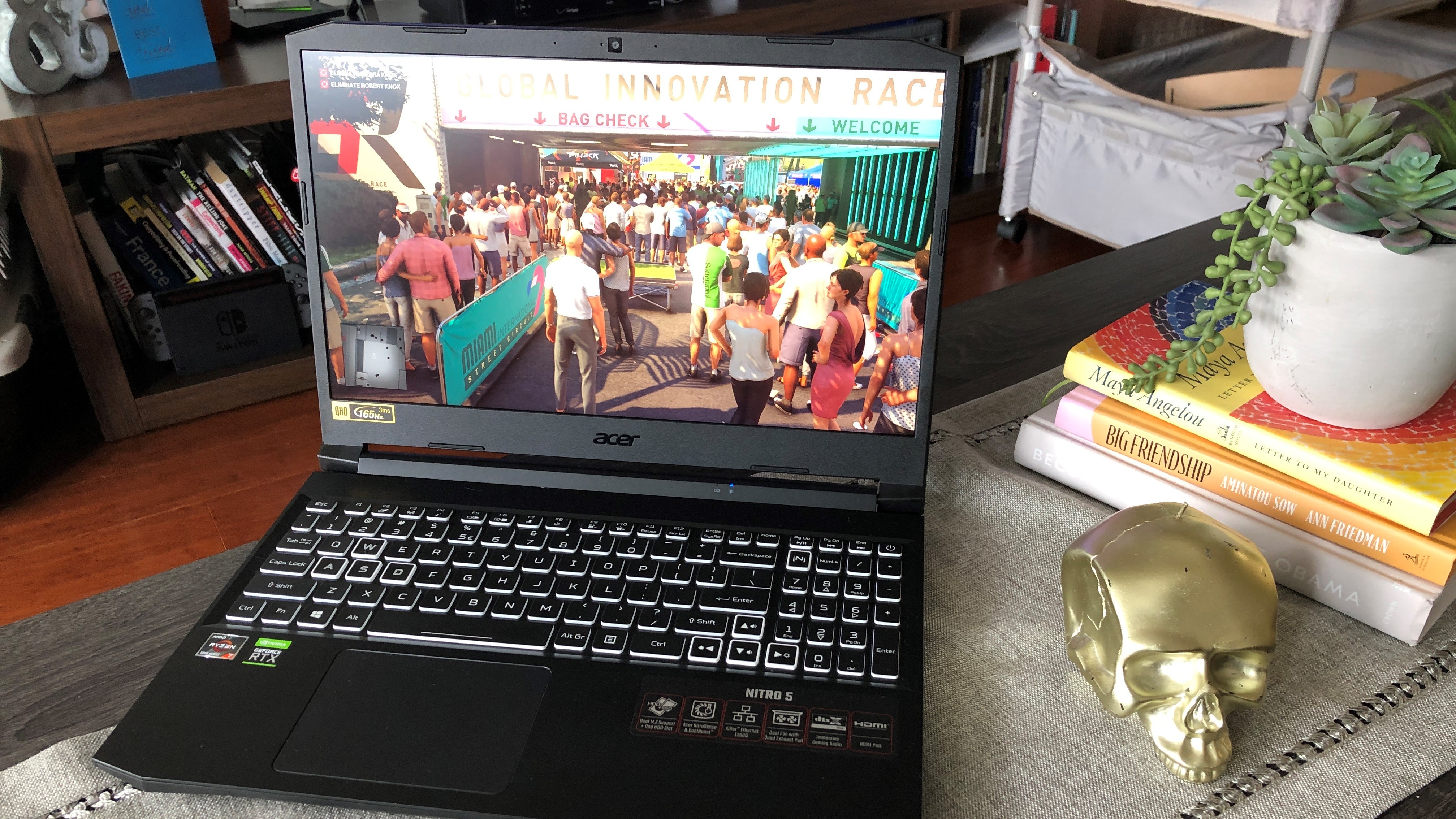