Lenovo Legion 5 Pro gaming laptop and Asus TUF Gaming A15 to compare the Helios to. Both come touting an AMD Ryzen 9 5800H CPU and Nvidia RTX 3070 combo, with TUF's GPU sitting at just 95W. The Razer Blade 14 makes an appearance because, although it's a little more expensive than the rest, the Ryzen 9 5900HX and 100W RTX 3060 with a 1440p panel is somewhat closer to the Helios' config.

The bottom line? Despite sitting neatly between the TUF and the Blade in terms of price, the Helios manages to slay all three in both synthetic and real-world GPU benchmarks, except for Metro Exodus where it sits almost on par with the TUF.

When it comes to slightly older games like F1 2020, it manages to break the 165 fps barrier even at ua settings—only by a little, but that's when faced with a rainy-ass Vietnam circuit. With a few tweaks it's easy to achieve frame rates in excess of 165 fps to make the most of the panel in a good deal of today's games, as long as you don't mind sacrificing some of that sweet fidelity.

When it comes to ray tracing, the Helios blows all three out of the water in the 3DMark Port Royal synthetic performance benchmark, nearly doubling the Razer Blade's score, though it falls behind the Legion in ray tracing tests.

That's not to say switching on ray tracing makes games unplayable—61 fps is more than acceptable for Metro Exodus—but even with Nvidia's DLSS turned on its clear the 140W RTX 3060 still has trouble matching the RTX 3070 in terms of real-world ray tracing performance, particularly when faced with an intensive game like Metro.

As for the Intel Core i7 12700H's contribution to gaming performance, Hitman 3's CPU-focused Dartmoor benchmark reveals a blistering 30 frames more per second than the Legion 5 Pro delivered. A 3DMark Timespy CPU score of 13,452 beats out the list of comparative laptops by a handsome amount, and the CPU shows off in rendering, too. The Core i7 12700H's multi-core performance is spectacular, and it does a great job of video encoding, with a 55 fps average over the 41–44 fps the others delivered.

Sadly, the Core i7 12700H isn't the most efficient mobile CPU of Intel's 12th Gen lineup, and coupled with the 140W RTX 3060 it's left the battery life in a pretty terrible position—74 minutes is hardly enough time to get a round of gaming in unplugged, but that's the tradeoff we've grown to expect for a machine that ticks both the gaming and productivity boxes.

What is impressive, however, is that power doesn't translate into topping out on thermals. We're looking at a maximum CPU temperature of 85°C and max GPU temps of less than 80°C. That's not at all bad, compared to the other laptops in that price range, and you can always slap the turbo button on the top left of the keyboard if you feel it getting a bit too hot. It'll suddenly whir up to somewhere between 68–75 decibels, but lay your hand on the bottom for half a minute and you'll physically feel the chassis cool off. It's great for that panic moment when you realise you've been covering the exhausts and need to rectify the heat that's accumulated.

And it's not just the CPU/GPU combo that slaps, either. Acer's decision to add a 1TB Gen4 Samsung NVMe SSD is much appreciated, since we need more laptops with high capacity SSDs on the market. Speed-wise, we're looking at just over 10 seconds real-world load times, which is still a darn sight better than the laptops I'm comparing it to. Loading Cities Skylines with my 10,000 mods didn't leave me long enough to go make a cup of tea, in fact, which I suppose is technically a good thing.

In terms of RAM, Acer comes in with 16GB dual-channel DDR5 memory, with the SiSoft Sandra tests uncovering a whopping 41.52GB/s bandwidth to play with. That provides a lot of slack when it comes to multitasking and is practically supersonic compared to the comparison lappies.

It's a relatively chunky machine, but not to the point of taking over your desk. It's easy enough for me to lift one-handed but fitting it into a backpack was a bit of a stretch, that's due to the 17.3-inch screen. The thickness can make it a little awkward, and it's not as svelte as say the Razer Blade, but that little extra thickness helps afford this machine great thermals. With a little backpack upgrade, I would happily carry it to and from work.

The only issue with using it at work is an issue the Razer blade suffers with too: the fact it has a dumb gamery logo (sorry Acer) slapped onto the back of an otherwise gorgeous chassis. The metallic blue is nice and subtle, although the edges are a little sharp for sitting on my actual lap, it's still a nifty and still very portable machine.

As for the peripherals and ports, the addition of Thunderbolt 4 is great, along with the couple of USB Type-A 3.2 Gen 2 ports you get, though a few more wouldn't have gone amiss. I'm really happy with both the high positioning of the included 2.1MP camera, and the fact it runs at 60Hz. A quality webcam on a gaming laptop that isn't pointing up my nose, for once.

I'm not a massive fan of the keyboard's feel, but at least it's full size. Having spent a lot of time checking out press samples of US keyboards and laptops, it's also nice for me to use a lappy with a UK keyboard layout. Although that does bring me to one of the major downsides: US availability.

The closest config I could find in the US only comes with a 144Hz 1080p screen and half the SSD storage, and generally it's selling for around $1,800, which I can't wrap my head around. Basically, I won't be recommending it for you US folks, sorry, but if you're in the market for a decent gaming laptop in the UK, this machine is killer. What really makes for a worthwhile spend here is the 1440p panel topping a beefy config, with the rest just serving as the icing on the cake. 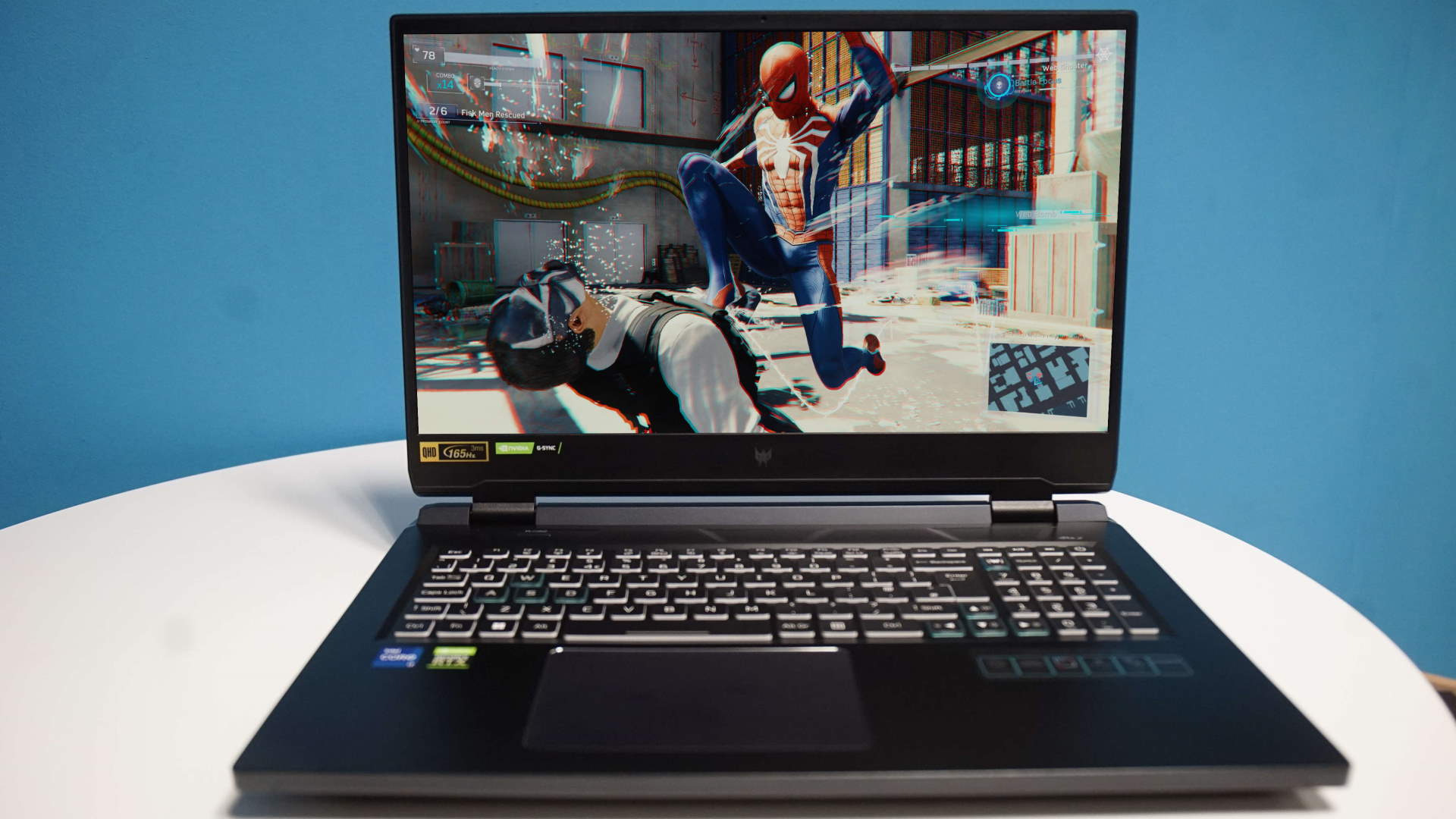 How to enable crossplay in Valheim

Disney Dreamlight Valley already has over one million players