I'm a millennial: I like my avocado on toast and I'm all too guilty of paying out my ass to get iced coffee delivered to my doorstep. As we all know, these are the two fundamental reasons I'll never be a real-life homeowner, or at least not for a long while anyway. But you know, I've got dreams of owning a space to call my own—one I can use to tell people I'm “a plant person” as my fourth pothos of the year wilts away on the windowsill. One where I can throw up every egregious wall hanging I've collected from decorating old university rooms. One where I can speak louder than a meek whisper for fear of waking up any family member who has the audacity to be asleep before 9 PM.

Living with your parents is great, by the way.

So I was intrigued when someone in my Final Fantasy 14 free company (its version of guilds) dropped this message in our chat on New Year's Eve: “There's a small house going in the Mist right now if anyone's interested.” I was interested. I'd recently stumbled upon a small mountain of gil and was looking for a way to burn it. What else was I going to do on the final day of 2021, spend it with my family and friends? Pipe down.

You see, buying a house in Final Fantasy 14 isn't as simple as going “yeah, I fancy a house now” and forking out the gil for one. The game's housing market is nearly as dire as real-life property hunting—there's a scarce number of plots available that rarely get vacated. When one does, it's slapped with an invisible timer that can lift at any point between 30 minutes and 24 hours later. Until that point, you can't buy shit. You're stuck clicking a placard over and over again, waiting for this magical clock to decide you're allowed to be a homeowner. Apparently I'm a masochist, because it sounded like a perfectly normal and fun way to spend my Friday afternoon.

At 1 PM, I journeyed over to the plot to scope it out. There were two other people present, nothing major. The plot was in a less than desirable place, with its entrance directly facing an unsightly medium-sized house. “A house is a house, and what else are you going to do today?” I told myself as I made my first attempt to buy the house.

“This plot of land is not yet ready for purchase.”

Okay, I was expecting that. It was never going to be that easy. I knew I'd be seeing that message an awful lot for the next few hours. A few pals started to catch wind of my house-hunting quest and came along for support. While the encouragement was much-needed, it was also a great way to bolster the number of people swarming the placard, which I hoped would scare off other potential landowners.

Hours went by and nothing. It was around 6 PM at this point, my fingers were tired and I was beginning to give up. Turns out pressing Numpad 0 and Numpad 4 hundreds of times in a row is a bit bloody boring. Despite praying to every god that all the other people trying to buy the plot would piss off, it was only causing more players to turn up and have a crack at it.

“Listen,” my one friend tried to reason with me. “If I were you, I'd probably leave it. There's too many people. You have a better chance at getting three lines on Wondrous Tails.” Your chances of getting three lines on this grid are roughly 0.2%, so this was perfectly reasonable advice. But I'm not a reasonable person. Throw away the last five hours of my life and walk away homeless? Nuh-uh. It was a sunk cost fallacy at this point, and I was willing to sink further.

It was 10:10 PM. I was tired. I'd tested positive for Covid. I was still at this plot out of sheer stubbornness. I had my phone in one hand, scrolling through social media. The other hand was mindlessly slamming my poor Numpad 0 and Numpad 4 keys, torturing them for the ninth hour in a row. Suddenly, an unfamiliar noise quietly poured out of my headphones. I looked up from my phone to see in big gold letters:

I screamed, so much so my poor guildmates sat in Discord with me probably had to go for a hearing test the next morning. Nine hours of relentless menu selection had finally rewarded me. I was a virtual homeowner! I was a broken husk of a woman, but at least I had something to show for it. The hard part was over, and now I could do the fun bit and decorate my new cottage.

Or at least, I thought the hard part was over. I'd seen gorgeous screenshots and videos of various designer homes, including some of the great interior design skills from my own guildmates. But I'd never exactly put much thought into how it was all done. I assumed Final Fantasy 14's decoration system was in-depth, something akin to The Sims.

Turns out, Final Fantasy's 14 decoration system sucks ass. It's so bad and nobody warned me. Something I hadn't perceived while peeping all the cool stuff people do with houses is that a huge majority of the interior design community glitches the shit outta their spaces. A lot of homes use a technique called “floating,” where you use the stage panel item and either a wall shelf or wooden loft to hike an object up into the air. You can float rugs to make ceilings, create lofts and then float objects to put on top of it or make a half-wall or two.

Floating is fairly necessary for a nice-looking house because without it, you're left with an upsettingly basic toolset. And don't even get me started on the walls and ceiling. Oh my god, the walls and ceiling. They're so ugly. Disgusting wooden beams run all through the house, rudely obstructing any cute wallpaper you dare throw up. Want to get rid of them? Gotta cover them up with furniture.

Covering the walls wasn't a huge deal, and was where I utilised my first glitching trick. Using a screenshot of a cosy-looking apartment as a reference, I grabbed some white rectangular partitions and got to work trying to float them. Floating furniture is a finicky bugger and no amount of words will make it make sense, so here's a quick GIF of how it works:

The best thing about this is if you cock it up, you gotta put that bad boy back on the ground and start all over again. This happened a lot when I was attempting to cover the butt-ugly ceiling on my cottage's first floor. Why had I spent over 4 million gil for something that was driving me up the wall? Did I hate myself that much? I was about four days post-purchase and the buyer's remorse had well and truly set in. Beauty is pain, they say, and it felt like my dreams of having a pretty house were slipping away. I'm a woman who likes things done quickly and with as little effort as possible, and decorating this house was proving to be anything but. I had some help from a glitch-savvy friend, but I was determined to do most of it by myself.

I quickly ran into another issue, though. All houses have a furniture item limit and it ain't a lot. 200 slots for a small home, which is fine if you're not trying to transform your cottage into something more than two ugly square rooms. Structural furniture alone had robbed me of almost half my slots, leaving me with just over 100 items to decorate my gaff with. I was convinced I couldn't do it.

But bit-by-bit, I found ways to save on furniture slots. Why use five slots on a dining table and four chairs when there's a furniture item that has all of that and only uses up one? I also went for the classic “if there aren't enough slots to decorate, just make the house smaller” tactic. It was finally coming together! For the first time in days, I was seeing the fruits of my labour and feeling like I'd actually accomplished something.

It took me around seven days to finish my house, and I gotta say I'm pretty damn proud of it. It's not perfect by any means—furniture limits meant I had to keep the god-awful ceiling in the basement and I couldn't toss in as much clutter as I usually like doing in my Sims builds. The exterior design I chose for my house means there's a random window at the top of my stairs that looks very, very stupid. It's next to two, much nicer windows that I placed myself, which makes it look even more stupid. It's my stupid little window though, in my stupid little cottage that turns out to have a great view when you're not face-to-face with the house directly opposite. You can see the ocean! That's pretty rad if you ask me.

After I placed that 200th item and looked at my week's work, I felt empty. All the stress, frustration and repeated furniture glitching was finally over. Despite everything, I wanted to do it all again. Maybe when the new Ishgard residential district opens, I'll nab myself an apartment as a new decorating opportunity. I'm digging the repurposed church vibes it has going for it, and an apartment doesn't force me to log in once every 45 days to keep it.

Yep, another fun caveat. Like I said before, houses are scarce buggers. To keep the market moving and give us all a fair chance, Square Enix decided to introduce a feature that gives you the boot if you don't log in and enter your house for 45 days. On the one hand, there's a good chance the plot of land I have now was snatched from the hands of some poor inactive player. On the other hand, the thought of essentially paying rent in the form of a subscription to enter my house is mind-boggling. I've taken some long breaks from this game, and now I'm bound by it. I don't see myself quitting anytime soon, but when my next hiatus approaches I'll have some tough decisions to make.

For now, my new home has become a nice little place to hang out. Though since my friends discovered we can get on top of the roof, we've not done a lot of hanging out inside the house. It's the first place I see when I log in, and the place I teleport to at the end of the night to log out. It's where my friends and I hang out before heading into a raid, or where I go to clear my head when I'm getting frustrated with the game. Buying and decorating the place might have been a bloody nightmare, but I wouldn't change any of it.

Except maybe the “clicking a placard for nine hours part” or the “log in or forfeit your house” part. Maybe. 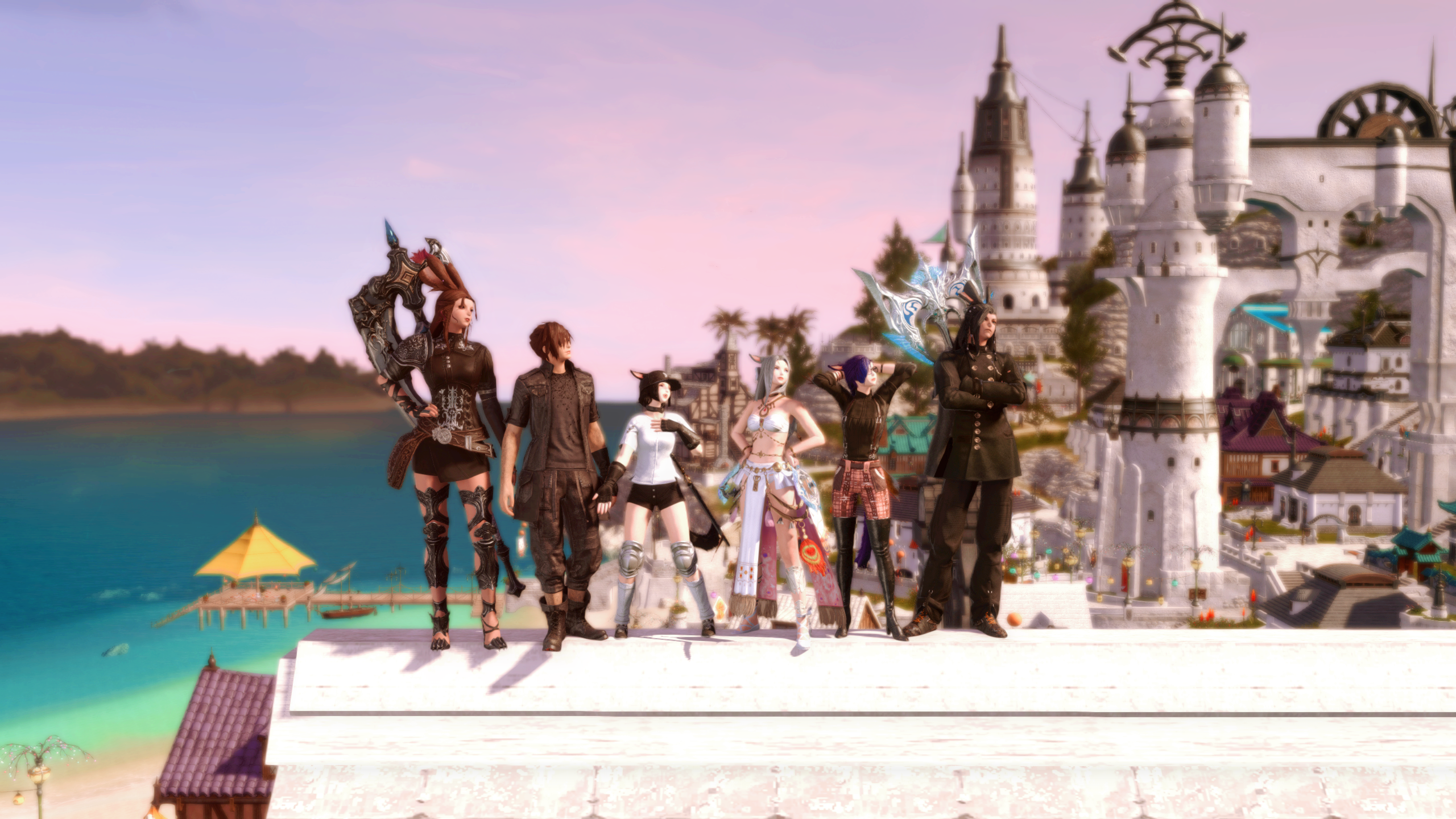