As for the Xeneon’s broader physical attributes, as tested it comes with Corsair’s familiar stand. It’s a hefty affair with an elaborate metal base. We don’t doubt the quality, but it’s not the most ergonomic solution and uses up a lot of desk space.

Anyway, the supplied stand includes a wide range of height, tilt, and swivel adjustment, plus good cable management and an additional so-called multi-mount at the top that content creators will appreciate for attaching cameras and lights. Overall, with slim bezels on three sides of the display, it’s a reasonably contemporary design, but probably not a screen you’d buy based on aesthetics.

More importantly, however, would or rather should you buy it for the image quality and gaming experience? It’s certainly a punchy panel, even in SDR mode. We like the fact that the brightness is adjustable in all the gamut presets, including sRGB, Adobe RGB, and DCI-P3, too. There are no horrors when it comes to out-of-the-box calibration, even if the factory calibration is a little on the warm side, so only serious content creators will need to tweak the colour balance.

Sticking with SDR performance, jump into your favourite game and you’ll find the pixel response is plenty fast enough. Corsair provides three levels of user-configurable overdrive in the OSD menu for accelerating pixel response, plus a dynamic setting.

In both the dynamic and the fastest of the conventional settings, some overshoot and inverse ghosting is visible. But knock the overdrive back from “fastest” to “fast” and the result is really zippy response with no obvious ugliness. Add in the glorious detail of that 4K pixel grid and the 144Hz refresh and it’s one heck of a gaming experience. We like.

As ever with 4K monitors, of course, you’ll also need one heck of a graphics card to make the most of it. We’re talking Nvidia RTX 3080 at minimum. Hopefully, when AMD and Nvidia’s next-gen GPUs arrive later this year, true 4K graphics performance will become a bit more accessible. But, realistically, it’s going to be a few more years before 4K PC gaming achieves anything like mainstream attainability.

Less impressive is the Xeneon’s off-angle contrast. There’s a touch too much of that characteristic IPS glow when viewing from anything but dead-on, implying slightly aged IPS panel tech. But this monitor’s real weakness is HDR performance. The 16 edge-lit local dimming zones really are a pointless kludge and do not deliver a true HDR experience. OK, in a game like Cyberpunk 2077, the Xeneon probably does look a little more zingy running in HDR than SDR. But there’s not much in it.

Still, SDR content looks good with the panel in HDR mode, so you at least have the option of leaving it in HDR and dipping in and out based on the content. Panels, where SDR content is basically broken in HDR mode, are awfully tiresome and remarkably common.

What, then, to make of Corsair’s latest 4K monitor? Just to contradict ourselves, arguably its greatest challenge is making a case for itself versus something like a 120Hz 4K OLED TV. That’s just about attainable for the same money as this out-and-out monitor and feels like far more screen for the money.

Granted, an OLED TV has drawbacks, not least of which are ergonomics. Do you really want a 48-inch monitor? But at the same time, the HDR performance of an OLED panel is on another level and the pixel response is miles ahead, too.

To be sure, the pricing of the Corsair Xeneon 32UHD144 is not out of whack with comparable PC monitors. We just think the whole market for this class of display is overpriced. Or it needs to up its HDR game. One or the other. As it is, this is a very nice 4K high-refresh SDR monitor, but not a true HDR panel. Is true HDR really too much to ask for around $1,000? 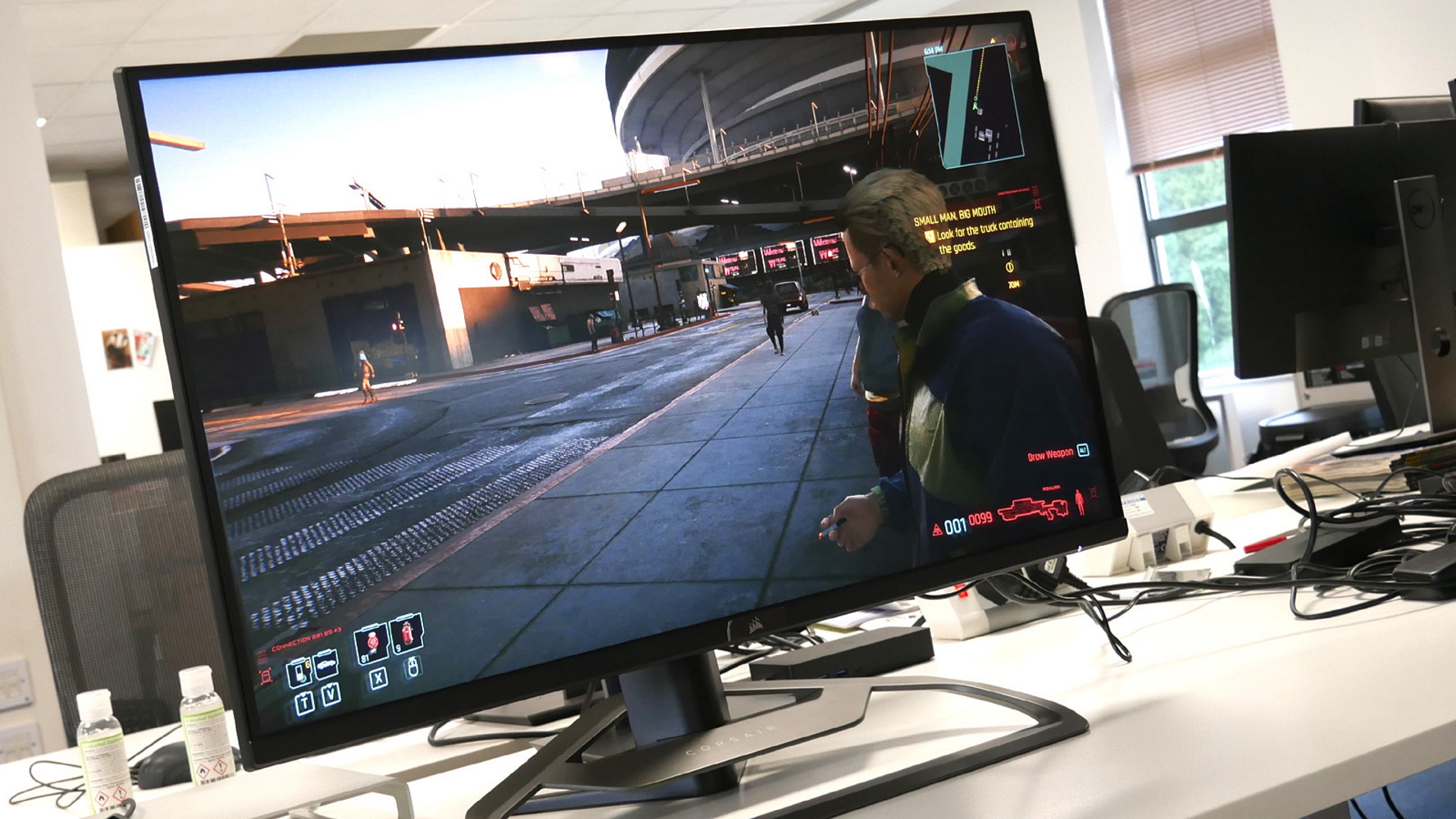