Creating the worst party of heroes in Wildermyth

Wildermyth is a game about creating legends, heroes whose stories of bravery and valour are passed down through generations. But the thing about legends is the people behind them are often, for want of a better word, pricks. You only need look at history for countless examples of this. Richard the Lionheart? Utter shambles of a king. Christopher Columbus? So unbearably awful that his medieval contemporaries thought he was a jeb. Julius Caesar? Genuinely one of the most destructive human beings to have ever lived, and he bragged about it.

So I want to create some legends who are, if not exactly worthy of the title, at least accurately represent the type of malignant personality that gets warped into a role model by time and the patriarchy. The kinds of narcissists who genuinely believe that only they can save the world, who make all the worst, most reckless decisions and yet somehow come up smelling of roses. I want to make a party of asinine, self-absorbed jerks, and run them through Wildermyth's picturesque fantasy world like a stag party lost on the local golf course.

1. Characters always make the most reckless narrative decisions.
2. Consequences must be lived with.
3. Must try to complete the quest.

To do this, we're kicking off with the starting campaign, the Age of Ulstryx, and creating three brand new characters—a female warrior named Illa Broadmill, a male hunter called Claynoc Bottlepurse, and a male Mystic ominously named Grifius Kylling. I let the randomiser pick names, appearance, gender, and so forth, but I tinker with their personalities to make them as unfit for heroism as possible. Illa, the troupe's melee vanguard, is a 'bookish coward', Claynoc is a 'snarky loner', and Grifius is a 'decisive greedwagon'. I don't know whether 'greedwagon' is a proper word, but if it isn't, it should be.

The Age of Ulstryx's opening sequence—which sees your party defending their village from a monster attack—also lets you establish specific relationships between characters. For Illa and Claynoc, I pick, 'rivals', as that's the closest I can get to them outright despising each other. I plan to do the same for Claynoc and Grifius, but the game won't let me. Instead, I choose 'romance' as I figure the potential fallout is greater than in a mere friendship.

The quest starts with a pleasing level of dysfunction. Illa bursts through Claynoc's door as fire rages through the village. “Honestly wished you would've skipped,” Claynoc mutters as Illa shoves her way inside. The pair debate what to do about the whole 'monsters tearing up the village' scenario before Illa picks a weapon to defend herself with. There's a pitchfork, a pickaxe and a frying pan. Naturally, I pick the frying pan. “I can't believe I'm dying with you,” Illa mumbles.

Luckily, the enemy at the door is a Roe, which is like a deer that's been crammed into a microwave. Illa and Claynoc dispatch it without too much trouble, then rendezvous with Grifius, who's exploring a ruined tower outside of town. “He's not mean,” Claynoc says wistfully about his lover. “There's just this kind of unapologetic self-interest, with him… that makes me laugh.” I give this relationship six months at best.

The pair meet up with Grifius outside the tower, who casually announces that he “does magic now”. Because of this, they collectively decide that they're a company of heroes, calling themselves 'The Wolves of the Candle'. I don't know what that means. I don't think they know what that means. But it's a better choice than Grifius' suggestion, 'Father's Generation'.

Ready for adventure, the Wolves of the Candle set out on their first quest. What could it be? Saving a local farmstead from bandits? Helping out a travelling merchant who encounters trouble on the road? Not quite. They head into a magical forest to cut down a sacred tree. This incurs the ire of a forest guardian, who's a bit like an Ent from The Lord of the Rings. Only in this version, Merry and Pippin chop it into firewood. Illa expresses some concerns about their complicity in fantasy deforestation, but by this point off-brand Treebeard is already on the logpile.

After their brush with nature, the Wolves head into town, where they recruit a new warrior named Frelwane. The game describes him as a 'hotheaded poet', which makes him sound like fantasy Eminem. Anyway, Frelwane quickly demonstrates his aptitude for adventuring life, when the group happens upon a trio of eerie, dancing spirits. Frelwane decides they should get involved, which Illa gently suggests might be a “profoundly bad idea”. Undeterred, Frelwane joins in with the ghostly festivities. When he emerges, he has aged ten years. At least the group has a veteran among them now, although by far the most grizzled part of Frelwane is his brain.

Now led by Dim Shady, the group travels to the province of Ultol Dreamloom (ironically a nightmare to pronounce) where Claynoc, master of stealth that he is, gets captured by a group of peasants who plan to sacrifice him to 'The Great One'. His acquaintances deliberate how to free him. Reason with the cultists? Or rescue Claynoc by force? I think we've already established that the Wolves are not reasonable types. Force it is!

The assault goes well, in that only one of the Wolves gets killed. As Frelwane and the others deal with the cultists, Grifius gets caught on the flank by the Great One, and is dealt a mortal blow. Knowing his fate is sealed, Grifius rushes the beast, doing as much damage as he can before the darkness takes him. It's a brave final act, although it would probably be more effective if he was armed with anything other than a wooden spoon. The remaining Wolves finish off the thoroughly spooned Great One, then bury their fallen comrade. Claynoc seems oddly unmoved by the death of his lover, although by this point it has been about six months, so perhaps the sheen has worn off.

The group process their grief over Grifius by immediately hiring a new member, a female Mystic named Sina Shy. Soon after, they achieve something vaguely heroic, defeating a Gorgon that has turned an entire village into stone. They're too late to save the villagers, of course, but at least they kill the beast. To celebrate, they decide to take ten years off, only returning to adventuring when Illa discovers the location of a powerful weapon called the Seaspear.

The reason Illa is doing this research is likely down to her bookish nature, a trait which has been enhanced by the fact that she has spent the last decade slowly turning into a tree. It's all because of an enchanted splinter she caught hiking through the woods with Claynoc, a splinter she left untreated because the Wolves of the Candle think 'septicaemia' is the name of one of Ulstryx's minions. This isn't the only transformation the Wolves undergo, either. Soon after they've left home on their second outing, Frelwane demonstrates his knack for heedlessly rushing into things by deciding to shove his whole arm into a giant magical fire, turning him into a kind of half-flame elemental. I can't say I'm surprised, the game did warn me that he was rather hot-headed.

In most fantasy stories, the middle chapter is the most exciting, the point at which the heroes face their darkest moments, the challenges that will make or break them before the final battle. But The Wolves of the Candle are not like other adventuring parties, and so little happens in their second act you'd think it was commissioned by Prime TV. The most interesting occurrence is that they recruit another new member, a young hunter named Marti Burly. Marti's primary characteristic is that he's a huge goofball, as demonstrated when he describes killing a particularly squishy kind of monster as “like popping a zit”.

The party retrieves the Seaspear with little incident, whereupon they take another decade off to recover from all that sitting around the campfire picking their teeth with the bones of their enemies. Illa's transformation into a tree continues, while Frelwane's fiery infection spreads to both arms. This leaves both my warriors unable to wield conventional weapons. On the plus side, the party is joined by Frelwane's now-adult son, Borwane. Unlike Frelwane, Borwane is a Mystic, and given his father's condition, presumably has a phobia of hugs.

Now six members strong, there's little that can trouble the Wolves of the Candle. So when a mysterious storm begins to drown the lands in floodwater, they decide to split into two groups. Young Borwane leads Marti and Sina to discover a way to stop the flooding, while Frelwane, Illa, and Claynoc head off to, uh, scout distant lands. It may look like they're jollying off on holiday while letting the kids do all the hard work, but it's definitely not like that.

Nonetheless, things initially look bright for the Pups of the Candle. As they travel toward their destination of Supplewade Cave, they're joined by a young female warrior called Hope. In a region known as Scantkiss Brooks, they bravely leap to the defence of a lone woman being attacked by Gorgons. By which I mean, they use her as bait while they prepare to ambush the beasts “We should use people as distractions more often!” says Hope, revealing herself to be a natural Wolf.

Anyway, the battle is a disaster. The ambush goes well, and the party brings down a couple of nasty monsters. But they overlook a small, mutant racoon that has been hexed by another monster with a spell that makes it explosive. The racoon scuttles right into the middle of the party, and detonates. Hope is killed outright, while Marti loses a leg to the blast. Borwane and Sina escape with comparatively minor wounds, but their time as a solo party is over before it has ever got started.

At least their sacrifice wasn't in vain. The elder Wolves have made some remarkable discoveries while their younger companions were busy losing limbs and dying. That's right, they found some haunted cows! Yep, the most exciting thing to happen to Illa and Frelwane during this period is that they stumble upon a farmer whose cattle has been infected by Gorgon corruption. They can't even save the cows. They just kill them and leave the farmer feeling a bit sad. Claynoc, meanwhile, tries to steal a jewel embedded in some ancient statue, and ends up with a chunk of it stuck in his eye.

The two parties eventually rendezvous up at Supplewade Cave, and after what are undoubtedly some very awkward conversations, travel together to Dapplereign Altar, for the final confrontation with Ulstryx. Here, there's a lot of melancholy talk about last stands and noble deaths. “If I die today, I won't have to live in a world wrought by my defeat,” proclaims Frelwane, while Illa sombrely states that, “Even in the relentless rain, it was a lovely place to die.”

Ultimately though, the Wolves of the Candle end up kicking the shit out of Ulstryx. They might be about as heroic as an island of rats fighting over the last coconut, but they have become extremely good at killing things. And in the end, that's how most legends get started. You don't need to be a hero, you just need to be the last bastard standing. 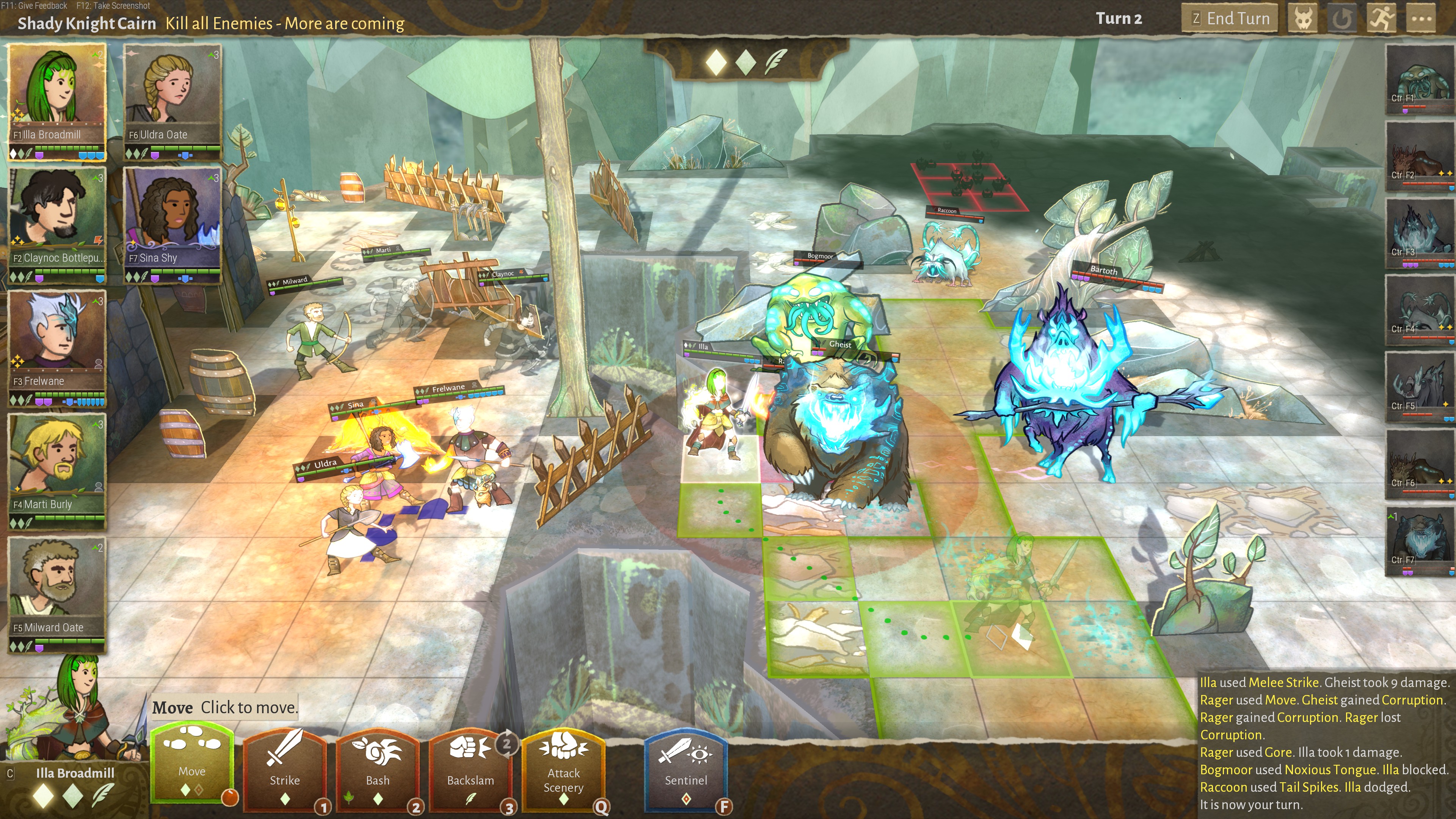 PC Gamer roasts 15 of the most beloved games