People who live in glass houses shouldn't throw stones. No, they need far more firepower than that. At least that's the case in Dome Keeper, where tides of vengeful monsters assault your all-too-breakable transparent sanctuary, and bulking up your laser defences is the only way to stay intact. Mercifully, the soil beneath your feet harbours pockets of raw materials, which you can use to strengthen your hardware.

Dome Keeper's roguelike routine is as beautifully simple as that: carve out chunks of soil during quiet moments, which last around a minute, then ascend home with whatever you find and repel the next assault. The reasons for your predicament are similarly simple, outlined in a miniscule intro that sees your glass spacecraft smash down on an alien landscape, squidging one of the locals. Now its kin are hellbent on shattering the killer snow globe, which sinks you into a suffocating loop.

It's suffocating because Dome Keeper is so tight and relentless, like the day-night cycle of a Terraria or Minecraft vacuum-packed into a single inescapable space. Your dome dweller, a smudge of pixel art, jet-packs around with worker bee urgency, knocking against blocks with a little drill until they crumble. All you  need to do is direct them towards a block for the drill to do its job. Some of the soft rock surrenders instantly, some requires a few stabs. With luck the tunnels you carve out lead to deposits of iron, which you attach to wires with a tap of a button then drag back to base.

Inside your fragile haven, a machine processes your catch so you can convert it into something useful. Your weighty laser cannon, which rotates around the perimeter of the dome, can be bolstered with extra speed or power. Or you might want to improve your drill strength, speed and carrying capability. Or install a scanner that counts down to the next attack, and a remote display that lets you keep track of the dome's integrity. If you want to beef up your shields or make repairs, meanwhile, you'll have to locate rarer materials—water and cobalt—first.

Whatever you decide, the monsters come. Your dome sits exposed in the bottom middle of a single screen as they tumble and teem across the ground on either side, or spit projectiles from the sky. To begin with, they come alone, but a few waves later they start to swarm. The laser soon feels inadequate, shifting slowly across the dome while the shadowy creatures pound the glass from all angles. It's impossible to keep everything from getting through. Time for more upgrades.

Dome Keeper never diverges from this cycle, yet its unassuming format is utterly absorbing. On the resource management level, it works because there are always pressing reasons to upgrade everything, and the benefits of every enhancement are transparent, so each cluster of ore secured becomes significant because of what it helps you achieve. And when you're fighting or mining, the demand for trade-offs and cost-benefit decisions remains powerfully present.

Defence is all about prioritising targets, a process driven by the length of time it takes to sweep from one side of the screen to the other. The most immediate threat might be on the right, but sometimes it's expedient to ignore that until you clear out the left first. In mining, you continuously weigh up how deep you should go, or how much iron to carry in one trip, since every unit slows you down a little. Thankfully, if you're overburdened, you can dump part of your load, because nothing's more deadly than letting the monsters start without you.

Most calculations in Dome Keeper thus exercise the time-keeping section of your brain—the bit that decides how late you can get away with leaving for an appointment, and convinces you against all logic that there's still time to check your emails. There will be moments when you return to find your base in chaos because you just couldn't leave that last lump of iron behind, like the idiot in a film that runs back into the burning building to grab a stash of money. Not that you should be early either—every second of downtime is wasted productivity.

Even your mining patterns require consideration. Dig down rather than across and you'll find harder rock but larger deposits of minerals. And if you tend to cut veins through the stone by digging in lines, you may want to take a cycle to clear out the patches in between, to create larger roadways for future trips. But then once you excavate a large area, it may be tricky to find your way back in a hurry, so perhaps leave some formations as landmarks, or as waystations to place resources on while you dive down for more.

There are so many practical concerns here that you'll forget the horror of your situation, which in itself is disconcerting. Dome Keeper is not a scary game, despite the shadowy, unknowable monsters who constantly harass you, but in part that's because it makes you too busy to contemplate your existential crisis. Once you do, though, it's uncanny. The dome is the goldfish bowl of modern life, where there's no standing still, only expansion or failure. You work all day to survive at night, always in isolation, and tomorrow you have to scrape together more than you did today—otherwise you won't be able to keep improving your home and yourself. Once you chip away the rock around this metaphor, it's hard to ignore, but it only adds poignancy to your endeavours.

Fortunately, as with any decent consumerist economy, shiny new toys occasionally arrive to light up the gloom. In the soil amongst the raw materials is some mysterious technology, shuttered away in caskets until you prise it free. Pull one such case up and you get a choice of two gadgets to play with, drawn from a selection of around eight in all, such as an elevator that can transport materials, a probe that can highlight resources in your vicinity, and a machine that can distil water from the atmosphere.

You will have instant favourites—everyone should fall for the chirpy Drillbert, an encapsulated mini-dinosaur with a drill beak that you can set loose to tunnel in your stead—but all are potential game changers, especially once you upgrade them. The teleporter, for example, is initially like the time travel device in The Terminator, in that it transports you but rejects any baggage you're dragging. That is until you re-engineer it to warp minerals, and then increase its efficiency so it saves you a lot of trouble carrying things.

Still, even these labour-saving devices are a burden of sorts. The more equipment you've got to run, after all, the more thinly your resources are spread, reducing how much you can pour into upgrades. Having a mod-con such as an elevator is one thing, but you really need the souped-up model that moves stuff quicker and more frequently, don't you? It's all part of the work-life cycle. Better get back to the mine.

At least in Dome Keeper there's a means to escape the cycle. In the default mode, Relic Hunt, you have to dig deep enough to find an ancient device and pop it into your dome to wipe out your enemies en masse. Playing on one of the game's smaller map sizes, which you select before starting, a winning run here tends to take 30-45 minutes, while on a large map, you can be drilling away for over an hour. Each completion then unlocks new backgrounds, alternate loadout options, or modifiers you can choose to apply in future runs.

The biggest prize, however, is Dome Keeper's second weapon system, which swaps the laser for a sword that swings across the dome and fires like a harpoon. It asks for a touch more skill to time swipes and aim shots, but it becomes devastating when augmented, and it's always nice to switch styles once in a while. The other major addition is Prestige mode, where you build up a score by surviving waves of monsters and compete in online leaderboards. The clever twist here is that you can send resources home to increase your score multiplier, which of course is a trade-off against upgrades. This should provide Dome Keeper with longevity even after you've explored every loadout and difficulty in Relic Hunt.

Still, because Dome Keeper is such a focused experience, it may need more meat to keep it fresh in the long term. While it never fails to hold the attention, by around the 10-hour mark you're not seeing much that's genuinely new. That goes especially for the monsters, which devolve into mere pests once you've survived for long enough. Developer Bippinbits has at least already promised a second character class, and hopefully more will follow.

Until then, a few minor fixes are in order. I lost an almost completed run when the game refused to reload my save on one occasion, while on another a run came to a halt simply because I couldn't find any water resources, which felt harsh. These incidents far from spoil a tremendously compelling overall experience, however, which crams so many tiny but consequential decisions into such a small space. For a tightly-crafted roguelike, there's no place like dome. 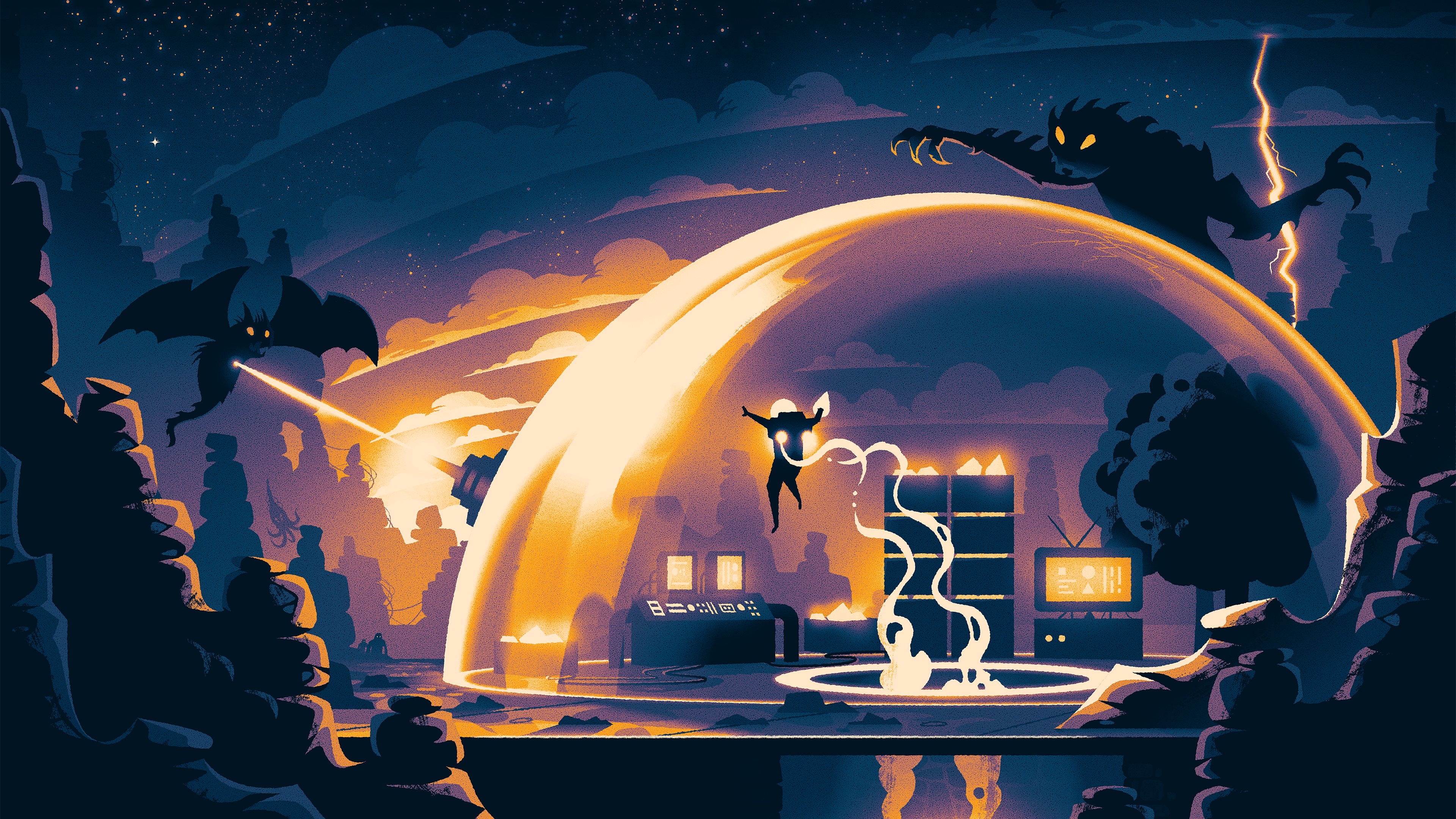 Elevate Your Game with the Mineral Camo Special Edition Controller

How to get Radiant Ore in Slime Rancher 2