Saints Row's titular gang is speeding through Santo Ileso, utterly disregarding numerous laws of the road. There's the usual reckless driving and ignoring traffic lights, of course, but more notable is what she's dragging along behind her car: a portaloo. An occupied portaloo.

She's softening up the unfortunate crook inside the loo so she can find out where his pals are holding a member of her gang. They were meant to be enjoying an evening of telenovelas, but he went and got himself kidnapped by the Idols, one of the Saints' rivals. And while this is a scripted mission, the winch is something you can attach to most vehicles outside of this scenario. Choppers can similarly pick stuff up and fly off with it. If Just Cause has taught us anything, it's that tethering stuff to vehicles always leads to hilarity.

Volition has made it clear that with a new gang comes a change in tone, as well as a more considered approach to your inner circle and the relationships you develop with them. There's more than a hint of Fast & Furious' obsession with family, and like that series there is some straight-faced sincerity amid the wingsuit stunts—you can bounce off pedestrians to get more air—and explosive heists. So it's still a farce, but one with emotional grounding and internal logic.

“It doesn't matter how absurd a thing is if it has an emotional truth underneath it,” says lead mission writer Jeremy Bernstein. “That final mission [in the demo], Kevin's missing, the Idols are gonna kill him, and that's serious, and it feels serious to you and it feels serious to the boss, to the character that you're playing. So the things you do to rescue him, beating the guy's head against the jukebox and dragging him around in the porta-potty, those are absurdist, but the emotionality behind it, that grounding, that character drive, that's all very real. You're trying to find your friend. That gives you this great balance where you are doing absurd things, but it feels like it matters. Absurdism for the sake of absurdism, that's where everything feels fluffy and doesn't feel like anything really means anything.”

We're not talking superheroes, alien dictators and trips to Hell, but the classic shenanigans still survive. Insurance Fraud, where you get tossed around like a ragdoll for a quick buck, is still here, as is Mayhem, letting you blow off some steam by blowing everything up. What grounded means for Saints Row, then, is not a dismissal of the antics that made it stand out from GTA, but an attempt to make it coherent.

You can see this in how it presents its over-the-top activities. Things like Insurance Fraud and Mayhem are now connected to criminal ventures: businesses you open across the city in an attempt to take it over. From your war table in your customisable HQ, you can see the whole city and decide where to plonk down your new illicit businesses, in turn unlocking new activities and rewards.

So you get your “fun and wacky” situations, as principal designer Damien Allen puts it, but they still “make sense of this criminal empire.” There's a point to the weird stuff you're doing. And there's more to do beyond these criminal ventures.

“There's other opportunities that aren't necessarily tied to a building that the Saints can get into,” Allen says. “And they have just as much variety as the buildings as to what those activities are, focusing on different abilities and mechanics and things we have throughout the game. If you have a favourite thing to do, there's probably an activity that allows you to express that.”

Other opportunities for shenanigans include random ambient diversions, like finding an armoured truck that you can loot, and side hustles, which let you repeat tasks that appear on the map, like riding shotgun for someone while they rob a shop. Nobody in Saints Row ever considers committing crimes that don't end in high-speed pursuits, nor should they.

While the criminal ventures can be placed in any of the available slots on your map, where you plonk them doesn't actually matter much, though I do like how it allows you to put your stamp on the city just a wee bit, making yours look subtly different from your friends' stomping grounds. And then you'll be able to show it off in co-op.

“The game is all playable—all facets of the game, open world, critical path—in untethered two-player co-op,” says Traficante. “We do have moments where we need to sync the players up with invites and joins as we've done similarly in the past. In terms of progression, all the content is dialled up—you've got a buddy, so it's not going to be as easy as it would be [solo]. But co-op partners earn and share rewards. So if you're playing a game, let's say in late game, you join the early game, you will get those rewards. And when you get that mission, or you get those moments, the game will ask you if you want to skip.”

It's a good opportunity to show off your slick new threads or souped-up ride, as well. A liberating amount of customisation has always been Saint Row's deal, so it shouldn't come as a surprise that this remains true in the reboot. Volition released a trailer showcasing character customisation a wee while ago, and this time I got to see it in action as the developer switched between various versions of the boss on the fly. This can all be done via your phone whenever you want, though you may need to unlock some stuff before you put together your perfect protagonist.

As well as being able to make plenty of cosmetic changes to your vehicles, there's also some handy practical enhancements, including an ejector seat that's perfect if you fancy switching from driving to gliding in your wingsuit, boosts that give you a nice rush of speed, and the aforementioned winch. This goes for weapons, too, so you can change their appearance or enhance them, like turning a regular pistol into a machine pistol. The big new feature, however, is being able to swap their look for that of another weapon. We got transmog, baby!

“There are going to be some limitations,” explains Kenzie Lindgren, associate UX designer, “But there's going to be a certain set of, let's say, melee weapons, and you have your starter … but if you don't like the look of it, you can go and change the visual effect that's on it. So it keeps the stats of the original but you can change the look of it. And I believe that these are all [progression-based unlocks] as well, so you're not going to have it right away.”

It's another excuse to hit the shops or hunt down other opportunities for weapon rewards. And whether you're tweaking your boss, your vehicle or your weapon, “there's a lot of weird shit,” Lindgren promises. She teases that there's a lot of fun stuff you can stick on food trucks specifically, and Allen adds that you can stick bits of cardboard on some of the cars, “just because”. I'm rather partial to the big foam fingers, which I'm sure I'll be using with the weapon trasmog system a lot.

One thing Volition appears to be taking a bit more seriously this time are the shootouts. The previous games didn't offer a lot of structure to the fights, instead just giving you plenty of enemies to mop up with your increasingly devastating arsenal. Sure, there were distinct objectives and scripted sequences, but overall they had a very loose feel. The reboot's approach keeps the chaos, but foes seem like tougher customers, with more smarts and abilities tied to their role and what gang they belong to, beyond just filling your soft body with lots of bullets.

“[The gangs] each feel very unique,” says Allen. “They each feel like you know when you're fighting Panteros, you know when you're fighting Marshalls and Idols. The way they arrive and what you need to fight them feels very different, so it gives more of a sense of a personality to each of the enemy factions and that your strategies need to change. You still have tonnes of weapons and tonnes of variety, and you can move and shoot and shoot from the hip. But you have to think differently than you did in the past.”

In attempting to show off the breadth of Saints Row, Volition doesn't offer much time to dig into the characters and clams up whenever any story questions are raised. It's hard to get a feel for them, then, and the sequences with the gang bantering are some of the weaker parts of the demo, where they used to be a highlight. I did enjoy the boss and her pal being upset about missing their telenovela date, however, and one mission's climax puts one of your mates in the spotlight when she commandeers a monster truck, rams it into a furnace and destroys a factory. Commendable. I can see myself growing to like them, but right now I'm still mourning the old gang.

The old cliché of the city being part of the cast is alive and well, but at least with Saints Row it's a cliché Volition has earned the right to use, especially after the eccentric, lively cities of 3 and 4. Each district of Santo Ileso is meant to have its own vibe and NPCs, not just wandering the streets but getting into trouble with the law—or at least getting parking tickets—or just hanging out listening to an impromptu musical performance. Possibly from you. Of the 100 emotes you can bust out, you've got musical options, and ones that let you keep walking, so you can strut down the street while strumming your guitar as people dance and applaud. Around here this would probably inspire a mob to chase you down and smash your instrument over your head, so this makes a nice change.

Nothing in my 20-minute hands-off tour really surprised me, which is strange for a reboot. But it did absolutely seem like Saints Row. It couldn't be any other game. This is fine with me—there isn't a Saints Row I don't like—and no doubt this will be good news for fans worried about Volition changing too much. But any reinvention needs something bold and new to showcase the new direction, and so far Saints Row doesn't seem to have that. With the delay pushing it back to August, however, there's still time to wheel out something unexpected. 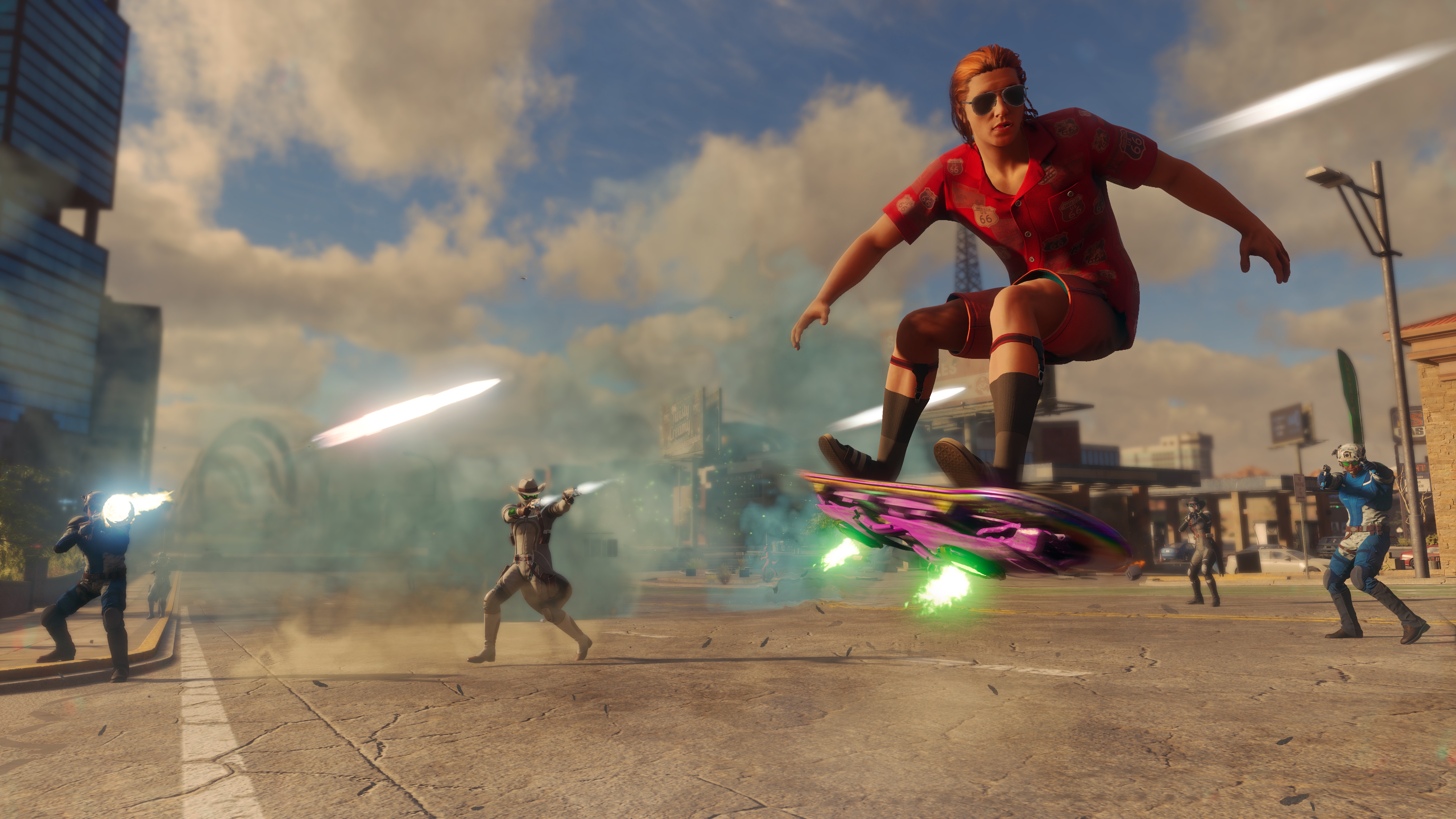