IGN speaks to 7 current and former employees about discrimination and harassment in the workplace, collecting new stories that mirror the DFEH report.

Everything that's happened so far, starting with the most recent events.

Friday, July 30: Vice publishes an article about Blizzard recruiters at a 2015 hacker conference harassing a security researcher who asked about a penetration testing (cybersecurity auditing) position. “One of them asked me when was the last time I was personally penetrated, if I liked being penetrated, and how often I got penetrated,” she said.

On the same day, Waypoint writes about an Activision Blizzard IT worker at the company's Minnesota office who installed spy cameras in the unisex bathroom. He pleaded guilty in 2018 to “interference with privacy.”

IGN also publishes a report based on interviews with seven current and former employees who speak to a number of issues, including women being evaluated differently than men inside Blizzard and breastfeeding rooms not having locks, at one point. One employee characterized the company's attempts to fix its culture as “putting lipstick on it.”

Another woman, who joined Activision in 2011 as a vice president, said that an executive “pressured her to have sex with him because she 'deserved to have some fun' after her boyfriend had died weeks earlier.”

Wednesday, July 28: Employees hold a walkout at Blizzard HQ, while others participate in the work stoppage remotely. Employees also respond to CEO Bobby Kotick's letter saying they are “pleased to see that our collective voices… have convinced leadership to change the tone of their communications,” but that Kotick “fails to address critical elements at the heart of employee concerns.” The response reiterates the four demands from Tuesday. “Today's walkout will demonstrate that this is not a one-time event that our leaders can ignore. We will not return to silence; we will not be placated by the same processes that led us to this point,” the letter says.

Game developers across the industry share messages of solidarity with the walkout.

Kotaku publishes a report on Blizzard's “Cosby Suite,” a recurring convention party room that Afrasiabi and other employees texted about bringing “hot chixx” to. Greg Street, a former World of Warcraft lead systems designer and current VP of MMO R&D at Riot, who is seen in a photo, claims that the hotel room was “a green room at Blizzcon that many of us at the time used to take a break and relax during the convention” and that “hot chixx” was a joke.

Activision Blizzard confirms to Kotaku that Alex Afrasiabi was terminated in 2020 “for his misconduct in his treatment of other employees.”

Tuesday, July 27: The World of Warcraft team announces that it plans to remove references from WoW that are “not appropriate,” likely including NPCs and items related to Alex Afrasiabi.

Employees state they plan to walk out on Wednesday to protest the company's response to the lawsuit. The open letter passes 3,000 signatories (Activision Blizzard has approximately 9,500 employees). The plans for the work stoppage come with four demands:

Late Tuesday afternoon, CEO Bobby Kotick writes a public note to employees calling the company's initial response “tone deaf,” and says “We are taking swift action to be the compassionate, caring company you came to work for and to ensure a safe environment. There is no place anywhere at our company for discrimination, harassment, or unequal treatment of any kind.”

“Anyone found to have impeded the integrity of our processes for evaluating claims and imposing appropriate consequences will be terminated.”

Monday, July 26: Activision holds an “all-hands” meeting that only has room for 500 staff. Executive Joshua Taub reportedly attempts to address the lawsuit, saying that there's “zero tolerance” for the behavior described in the lawsuit, and that Activision Blizzard works with employees and the accused to “work on a resolution.” Taub also says that Fran Townsend's response “wasn't the right communication.”

More than 1,000 current and former Activision Blizzard employees sign an open letter to management calling Townsend's statement “abhorrent and insulting to all that we believe our company should stand for.” The employee statement continues “Our values as employees are not accurately reflected in the words and actions of our leadership… Categorizing the claims that have been made as 'distorted, and in many cases false' creates a company atmosphere that disbelieves victims… Immediate corrections are needed from the highest level of our organization.”

The letter ends with a statement that the employees “stand with all our friends, teammates, and colleagues, as well as the members of our dedicated community, who have experienced mistreatment or harassment of any kind.”

Signatures from current and former continue to roll in.

Friday July 23: Activision Blizzard chief compliance officer Fran Townsend sends a very different message to staff, calling the lawsuit's depiction of AB “distorted and untrue” and that Activision Blizzard “truly values equality and fairness.” Townsend says that when she joined the executive leadership team in March 2021 she was certain she “was joining a company where I would be valued, treated with respect ,and provided opportunities equal to those afforded to the men of the company.” Townsend reiterates the initial response that the lawsuit's claims were inaccurate.

Blizzard co-founder and former president Mike Morhaime publishes “My thoughts,” stating “I wanted to acknowledge the women who had awful experiences. I hear you, I believe you, and I am so sorry to have let you down.”

A video from BlizzCon 2010 goes viral on Twitter. During a WoW panel Q&A, a woman asks about the possibility of less sexualized female characters. The panelists, including Alex Afrasiabi and now-president J. Allen Brack, laugh and make jokes in response.

Thursday, July 22: Blizzard president J. Allen Brack emails staff to say that the behavior detailed in the suit is “completely unacceptable.” Activision president Rob Kostich emails staff calling the allegations “deeply disturbing” and says that “we, as a company, take every allegation seriously.”

Wednesday, July 21: News breaks that the lawsuit has been filed. In a statement sent to PC Gamer and other press outlets, an Activision Blizzard spokesperson said that the lawsuit includes “distorted, and in many cases false, descriptions of Blizzard's past” and that the DFEH was “required by law to adequately investigate and to have good faith discussions with us to better understand and to resolve any claims or concerns before going to litigation, but they failed to do so. Instead, they rushed to file an inaccurate complaint, as we will demonstrate in court.”

Tuesday, July 20: California Department of Fair Employment and Housing files a lawsuit against Activision Blizzard alleging discrimination and sexual harassment against women in the workplace. The lawsuit mentions “cube crawls” in which drunk male employees subjected women to unwanted advances; a lack of women in leadership positions; unequal pay for women; and a lack of action from HR around many of these complaints. The suit also specifically calls out the actions of former WoW senior creative director Alex Afrasiabi, who was “permitted to engage in blatant sexual harassment with little to no repurcussions.”

What should we expect from the lawsuit itself?

The Department of Fair Employment and Housing's lawsuit has started a public maelstrom for Activision, but a court hearing could be weeks or months off—if the case goes to a trial at all.

“I don’t see either case as going to an actual trial,” lawyer Kellen Voyer tells PC Gamer, referring to the DFEH's case against Activision Blizzard as well as one it filed against Riot Games. “Typically the parties will settle out once the defendant has a better idea of the evidence being brought by the state and the strength of its case. The current negative press… is another reason why the companies will not want to go through a long, public trial.”

The DFEH's news page shows a number of settlements from the past three years to resolve discrimination and harassment cases, for sums ranging from $50,000 to $6.2 million. Voyer points out that a sexual harassment case brought by the state is stronger than a case from an individual, partially becasue it's public rather than private arbitration. (Ending mandatory arbitration in Activision Blizzard contracts is one of the demands listed by employees who participated in the July 28 work stoppage.)

Because the DFEH's investigation into Activision Blizzard must have been ongoing for some time, Voyer says the lawsuit is a way to publicly push Activision Blizzard into a settlement. The DFEH filing does request a jury trial, but this is standard practice and doesn't rule out the likely possibility of a settlement before trial begins.

“Activision Blizzard will fight tooth and nail to avoid [a trial] as I would expect a jury (especially in California) to come down hard on the company,” Voyer says. ” A settlement is likely before it gets to that stage.”

Going after a company as big as Activision Blizzard gives the DFEH a chance to make a public spectacle; even if it doesn't have strong enough evidence to push the company into a multi-million dollar settlement, it could have significant ramifications.

“To make an example of a company, even through the filing of the case and the negative PR that results for the company, will hopefully effectuate change through deterrence: by putting companies on notice that there are real, material, ramifications for failing to address toxic culture,” Voyer says.

It's still possible that this case goes to trial. If it does, the DFEH will likely be pushing for big monetary penalties and for Activision Blizzard to open itself up to oversight as it enacts plans to repair its workplace issues.

If Blizzard won at trial, it would likely push for no monetary damages and, in Voyer's words, “the usual corporate, general promise of 'we will change and do better.'” 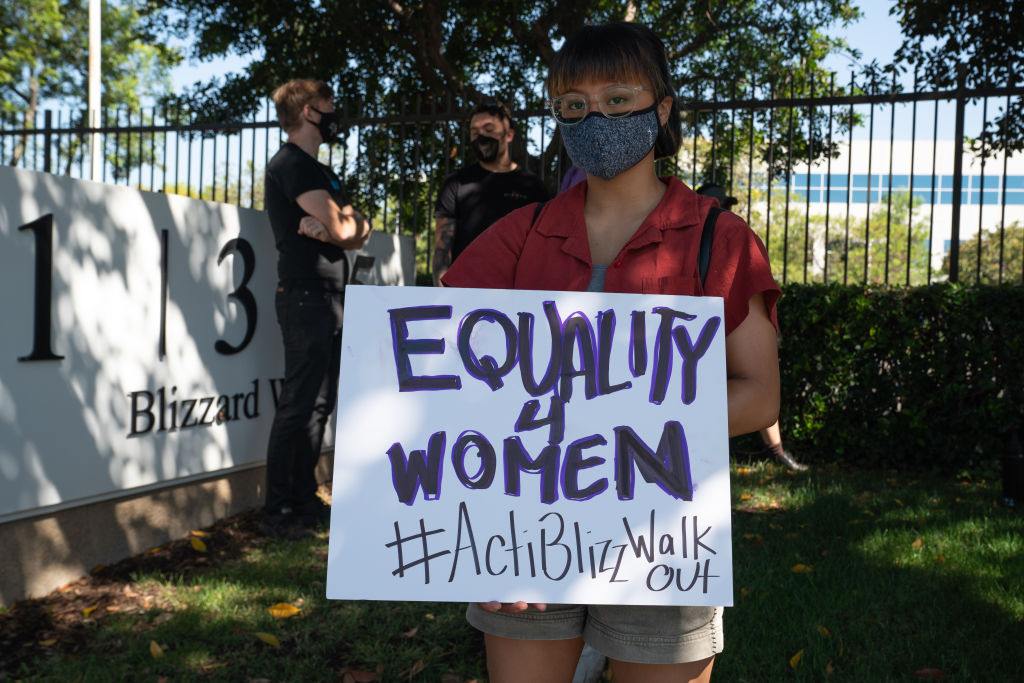