strange-looking cube has been spotted on the moon's surface. While the world waits for it to trundle over and investigate what scientific consensus so far agrees is 'just a rock,' PC Gamer's finest minds looked to gaming for the real answer…

It's a Companion Cube

Cube on the moon? Oh yep, sorry folks, think that was me. Left a companion cube up on the moon during my last playthrough of Portal 2. Got overexcited during that one bit where you suck an entire test chamber out onto the lunar surface and send Wheatley to hell. Thought I cleaned up all my space garbage, but I guess I missed a spot. —Morgan Park, Staff Writer

Don't be silly, it's cheese ore

You know what's cube-shaped? Yeah, just about everything in Minecraft. You know where Minecraft modders have taken the game? To the moon, obviously. There's an old, but once rather popular Minecraft mod called Galacticraft that challenged you to construct a spaceship, blast off, and explore the moon's surface. Grab your heavy duty pickaxe because that moon cube is definitely cheese ore and I am going to smelt it into cheese curds—a real part of Galacticraft that I am not making up. —Lauren Morton, Associate Editor

No, it's Spelunky 2's robot character

I knew I recognized this lunar silhouette. That blocky CRT in the distance has to be LISE, the playable robot character from Spelunky 2.

Spelunky 2, if you haven't played it by now, is set on the moon. It's an astronomically accurate representation of what's beneath the moon's surface:

If the cube isn't a blocky robot, it's probably some kind of top-secret rover or some other lunar drone from decades past that the government doesn't want us to know about. —Evan Lahti, Global Editor-in-Chief

It heralds the arrival of the Hive god Crota from Destiny

As Destiny has taught us, our moon is now the home of the Hive—an invading race of bone-covered, zombie-like, worm-infested space cannibals. Not cool. Particularly as the pricks have chiseled a huge hole into the surface, constructed a labyrinthine network of tunnels, and erected a sepulchral fortress called the Scarlet Keep, of which I'm presuming this cube is the first block. Or maybe it's a little outhouse where the Hive's construction workers are drinking a warming cup of ichor before cracking on with the building work. This scenario at least checks out with the blighted timeline we're living in. —Tim Clark, Brand Director

You're all wrong. It's a space dragon from Final Fantasy 14

Final Fantasy 14 players have dealt with dragons the size of a moon before. Bahamut broke out of the moon in 2012 and subsequently destroyed the world, so hard they shut down the MMO and make a new one. The moon cube is clearly evidence of a planet-sized dragon underneath, waiting to be released and to usher in a new age. Be afraid. —Tyler Colp, Associate Editor

No, seriously, it's just a rock

We're pretty sure one of our videogame theories is on the money, but just to cross all of our Ts, we asked Space.com editor-in-chief Tariq Malik what he makes of the moon cube.

“It's probably just a big rock. Sorry to burst your bubble, but this odd shape on the moon is likely a large boulder, or maybe even a few boulders that just happen to be arranged in a way that it takes on a cube shape when viewed from a far distance by China's Yutu 2 rover,” Malik told PC Gamer.

“We've seen similar illusions before like the famed Face on Mars, and even that weird Mars 'jelly doughnut,'” he said. “While I would love for it to be an obelisk from '2001: A Space Odyssey,' I fully expect China's rover to find a natural rock formation that is sure to be a new landmark on the far side of the moon.”

Sure. A rock. This just means he's in on it. 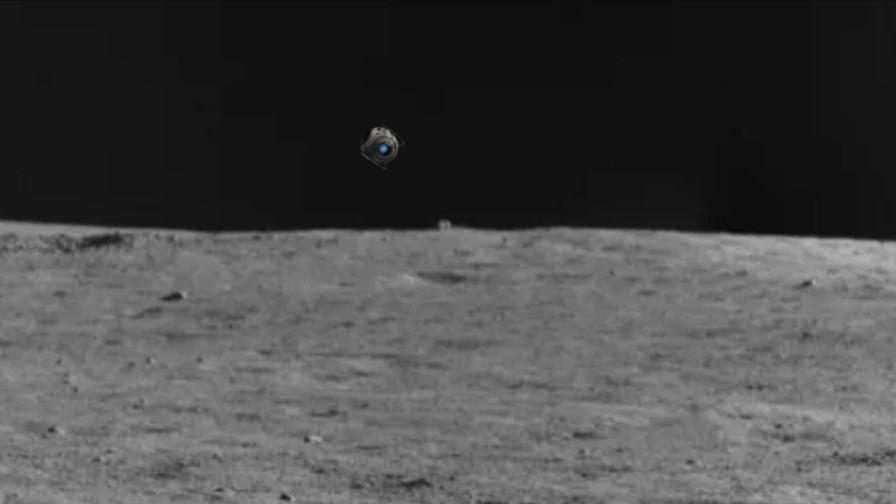 Call Of Duty Will Stay On PlayStation...

Cantina Manager, Jawa Simulator, and other pitches for our perfect Star Wars games

Call Of Duty Will Stay On PlayStation For Now, Bloomberg Reports

Fans have recreated a Spaceworld 1997 demo of Legend of Zelda: Ocarina of Time