There is no high quite like the emasculated agony of graphics envy. It was 2007, I was 16 years old, and still fully bound to the limitations of the Xbox 360 and PS3 in the bedroom. The hand-me-down laptop whirring on the desk could barely handle Battlefield 1942, much less the relentless tempo of speedy processors dutifully obsoleting the seventh generation of home consoles. Still, I voraciously tore through the games press, reading up on the mouthwatering vistas that were enthusiastically unavailable on a Dualshock, essentially as a way to torture myself. The primary object of my obsession? Supreme Commander.

Gas Powered Games' watershed RTS arrived with exactly one selling point; this thing was a beast, and you should be jealous if you couldn't run it. And so, I binged the 360p E3 preview footage of Supreme Commander on my sad, dinky laptop, which seemed to wheeze and gag at the mere sight of all of the quicksilver troops swarming over the skirmish fields. So close, and yet so far.

It sounds strange now, but there was a time in the mid-2000s where every GPU benchmark was set by the latest round of RTSes—much in the same way that Sony shows off new Playstation tech with rain-slicked Lamborghinis in a sumptuous Gran Turismo suite. If you grew up almost exclusively on consoles like I did, you became accustomed to this beautiful heartache when the PC class laps whatever third-party ports emanating from the family TV. 2007 was the apex of the cycle. Here I was stuck with, like, Mercenaries 2 while the adults in the room ran circles around us with the finely modelled tools of destruction deployed by Crytek and Relic. As I soaked up those titanium-plated mechs and supersonic bombing runs of the gorgeous Supreme Commander dystopia, I made a private pact that should be familiar to the many other young men reading this story. Someday, I too will dump a ton of my hard-earned income into a top-tier gaming rig, and then I'll never be left in the dust ever again.

It goes without saying that the Alienware Aurora below my desk is more than capable of running Supreme Commander in 2022. This machine just chewed through Elden Ring, Battlefield 2042, and Forza Horizon 5 without a hitch; I put my money where my mouth was. There is something darkly satisfying about returning to a videogame that was once a GPU showcase after much time has passed—much in the same way a crosstown rival relishes the chance to get their revenge on a formerly great sports team. Supreme Commander creaks out of my Steam library with none of the expected orthodoxies of the last 15 years. The resolution sputtered to fit the aspect ratio of a widescreen monitor, any stray alt-tabbing was guaranteed to lead to a lock-up, and I actually needed to slow down my mouse cursor speed to molasses levels in order to cut down on the 120fps whiplash. At last, after the humiliation of my Xboxified youth, revenge was finally mine. But at what cost?

Blowing off the dust

Gamers have rarely asked for much from a graphical standout beyond their aesthetics. Simply watching Supreme Commander run was half the appeal in its heyday, so I was not surprised that the campaign offered me a few paragraphs of sparse flavour text before dumping me into the barren grasslands crucial to the RTS experience. The missiles are supposed to do the heavy lifting, right? So, a few power generators and mass extractors later, the war machine was up and running, and I was ready to make good on a derelict promise I made with my teenage self. But reader, just look at what time hath wrought. The starchy textures of the earth stretched out in every direction, featureless and bland, almost Cruelty Squad-like in its disorienting uniformity. The tank-shaped blobs that steadily pumped out of my munitions factory looked better, but not by much. They encircled the rival base and peppered it with raw, pixelated smoke and fire. It would've been right at home on the App Store, advertised in the bleakest corners of the web.

How can that decay happen so quickly? Supreme Commander hasn't even celebrated its 20th anniversary, and yet its prime attribute has been absolutely obliterated by the PC power curve. A chill ran up my spine as I realised that this fate has probably befallen all of its peers; after all, it's been a while since I've seen Crysis up close, too.

Maybe this is a fitting fate. I have a faint memory of RTS diehards dismissing Supreme Commander while it was still at the peak of its influence, complaining that the game was more sizzle than steak compared to its deeper, but considerably uglier peers. (After all, Company of Heroes came out a year before.) I would never claim to be an expert of the genre, but after surviving the temporal horror of the boot-up, where it becomes excruciatingly clear that we're all deteriorating right alongside the video games we used to play, I can say for certain that Gas Powered Games got a bad rap. The studio was clearly in love with their tech, and gave the player ample opportunity to fill the screen with as many troops as possible. It's a philosophy that produced a gaucheness that likely turned off some of the traditionalists. My favourite quirk? Anyone can send an engineer into a blazing firefight where it can happily plop down a fresh manufacturing operation totally divorced from any adjacent resources or supply lines. Are you being victimised by bombing raids? No problem, just encircle yourself with a battalion of flak cannons anywhere on the map. These are the sort of firefights dreamt up by the most perverted Warhammer sickos; an endless tide of shocktroopers born into battle and living five-second lives.

Step on the gas

So yes, Supreme Commander is a little bit silly, but only as a way to summon up the primal joys of real-time strategy. If Mortal Kombat is a grotesque celebration of 100-hit combos and old-school arcade depravity, then this studio wished to celebrate the full-scale pyrotechnic throwdowns that define our favourite tactical successes. I never really loved managing an economy in the first place, and slamming up against the guardrails as I was trying to produce a legion of Mutalisks in various harebrained StarCraft schemes. Gas Powered Games was entirely disinterested in beating around the bush, and instead allowed players to prioritise whatever warfighters they want so long as the energy ratio is pointing up. Perhaps that's why there's still a small, dedicated Supreme Commander community crashing into each other on the desiccated servers. I became absolutely terrified to play them the deeper I got into the campaigns. There are so many bizarre strategic curveballs in this game, and that has undoubtedly consolidated into an abstruse meta that would leave me pantless and sobbing against even the most casual opponents. You really can build anything, which means you need to be scared of everything.

That was fine with me though, because it's been years—maybe even decades!—since I sat down with an old-fashioned RTS solo story. You know what I'm talking about; disembodied voices hovering over NPC megabases, a foreboding mission timer in the corner of the HUD counting down to a game-losing assault, the developers desperately squeezing any potential varietal out of what will always be a fairly straightforward premise. (Destroy the enemies halfway around the map. Leave no survivors. Prepare for a crippling counterattack.) It all took me back to a happier place. In one level I was supposed to use an air transport to hoist a crucial unit over some distant mountains that bracketed the map into two theatres. First though, I needed to rout the mobile anti-air cannons patrolling the no-man's land. Out came the tanks, blasting through the heavy steel, avenging all of my doomed pilots. That's the sweet spot for me: an RTS objective that doubles as a weird, rock-paper-scissors logic puzzle. If it's been a while since you've indulged in that erstwhile gaming pleasure, then I highly suggest coming home to Supreme Commander.

Honestly, that was my primary takeaway from the game, as it slowly morphed from an artefact of GPU lore to, well, an ordinary piece of outmoded software. This industry is cruel to its ancestors, especially those that once annihilated the motherboards of yore. In fact, I'd reckon that most people's relationship with Supreme Commander was one of inaccessibility—a faint idea of wondrous gaming superiority, something to flaunt over the plebs. All of that macho posturing has gracefully evaporated, leaving behind a very good RTS with a lot of neat systems, coming off more like an underdog indie project rather than the harbinger for a new era of PC engineering. In 2022 Supreme Commander is ugly, janky, and hopelessly out of step with modernity, but at least the giant robots explode in a nuclear fireball when they're killed. It was awe-inspiring in 2007, and now comes off kind of quaint—videogames in its primal adolescent period. Surely it is only a matter of time before another high-budget opus laps whatever I've got simmering under the hood, provoking a stressful search for a few extra gigs of RAM. That trick will keep working on me forever, and I'm all the happier for it. 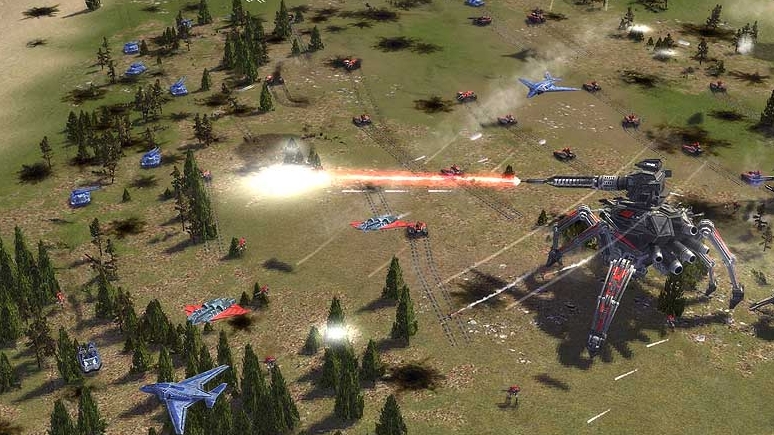