Draconia, an open-world MMORPG now in early access, promises to reveal the unseen side of beasthood: a world of crab-on-dragon violence, shell collecting, and the constant, inexorable pull of trying to screenshot your leathery wings against striking skies.

My horrid creation is soon complete: a sputum-yellow flying biohazard that even I’m disgusted to gaze upon. Perfect.

I name him Wort, and add the epithet ‘the Lonely’ for some nominative determinism. I mean, he deserves to be lonely. Just look at him. It’s like he rotted in the egg.

Wort is a European dragon, so I naturally decide he should go on a European server. (Despite what cartoons have told us, there’s apparently no such thing as an American dragon.) I spend some time waddling about, trying to get to grips with Draconia’s somewhat leaden controls. It’s not so much that they’re confusing, just that moving around, especially when walking, is like trying to drive an ice cream truck through a hedge maze. It’s only going to get trickier, too: Wort’s repellent frame will swell like an engorged boil as he levels up.

Thankfully flying is far more elegant, and there’s something stirring about taking to the skies. It gives me a sense of the scale of Draconia’s world, too. I do the first thing any self-respecting human would do if they were trapped inside a dragon bod: fly absurdly high, then dive maw-first into an expanse of water. But I go so fast and dive so deep it takes me about a minute to resurface. I’m a gigantic mythical beast—or at least, I will be one day—and this still feels like a massive world that's mine for the taking.

After some time cavorting I notice a problem. In my haste to pick an appropriate server, I failed to spot that it was literally empty. This simply won’t do. How can Wort be repulsive if there’s nobody around to repulse? It’s with that depressing thought in mind I relocate him to a US server. It’s still not massively full—there are probably about 10 other people—but it’s better than nothing.

In my experience, MMOs can be slightly intimidating. WoW at its peak wasn’t exactly hospitable. And I couldn't help but suspect a niche game about dragons might bring out the community gatekeepers, especially because I’ve rolled a character with all the allure of a medical sharps bin. I’m delighted to report I couldn’t have been more wrong.

They’re lovely. So lovely, in fact, that one of the bigger dragons even helps me reach a juicy haunch of mystery meat hanging too high up for Wort to reach. Swapping meat is how dragons say hello.

The bonus hock is helpful, because as well as being an MMO, Draconia has survival elements. Even heraldic beasts need to eat to live. Thankfully it’s quite a civilised affair: I’m able to pick up bags and store meat to consume later on. (I have no idea where I’m storing these. Presumably inside some kind of repulsive, mucus-slick dragon pouch.)

Drinking is simpler. I can slop down water from any source, from troughs to oceans. Weirdly, this is one of the most pleasing elements of Draconia: landing near a lake and stomping to the shore to rehydrate makes me feel like I’m an Attenborogh narration away from being in a nature doc.

Now that I’m not starving or thirsty, I set about my important dragon business. The problem is I’m not exactly sure what that is. I’ve read some scrolls I found lying about near the mystery meat, but they’re just scene-setting. There’s no sign of any missions and there’s nothing resembling a quest-giver in the starting area. In lieu of any specific purpose, I do a bit of research and learn that I can level up Wort by collecting things.

Like, literally anything. Sand. Stones. Shells. Sticks. Whatever I can find. This apparently-very-important detritus can be found everywhere, appearing as neat piles dotted around the land. I hoard them like a kleptomaniac toddler in a marble shop and swiftly level up. Wort gets bigger with every level, like a pus-filled balloon that refuses to burst. I’m both proud and revolted.

Collecting things is nice, but it feels like the sort of thing I’d expect from a thievish goblin and not a noble dragon. So, with the help of the many cooperative members of the community, I manage to locate a mysterious node that dispenses quests. This is where Draconia truly begins, I decide. I'll soon take my place in the scaly pantheon.

I check my quest log for a noble mission, and… I need to collect more shells. Lots of them.

I spend some time waddling between beaches, admiring the sunsets and fighting crabs. Add saucy postcards and raw sewage and this would be more like a British seaside holiday than an MMO about dragons. It takes ages to collect enough shells to finish the quest, and I’m not sure exactly what I’m getting out of it, but the fact it’s all so unexpectedly sedate is in itself interesting. I explore more widely, and, in truth, get hopelessly lost in Draconia’s massive, somewhat desolate landscape. I take photos. Burn some golems. Think about aerodynamics.

Right now there's very little to do in Draconia apart from collecting stuff and pretending to be a dragon with other people pretending to be dragons, but I sort-of love that. One recent negative Steam review opens with “at the moment this game is nothing but a 'make your own pretty dragon' simulator,” before criticising everything Draconia is missing. Combat with any real substance. Wildlife. Bosses. Sound effects for almost, well, anything.

But in a way that's beautiful. Perhaps this is actually what it's like to live the life of a dragon when there are no heroes out to slay you or piles of gold to sit on. Draconia is where the monsters come to relax and just be themselves. 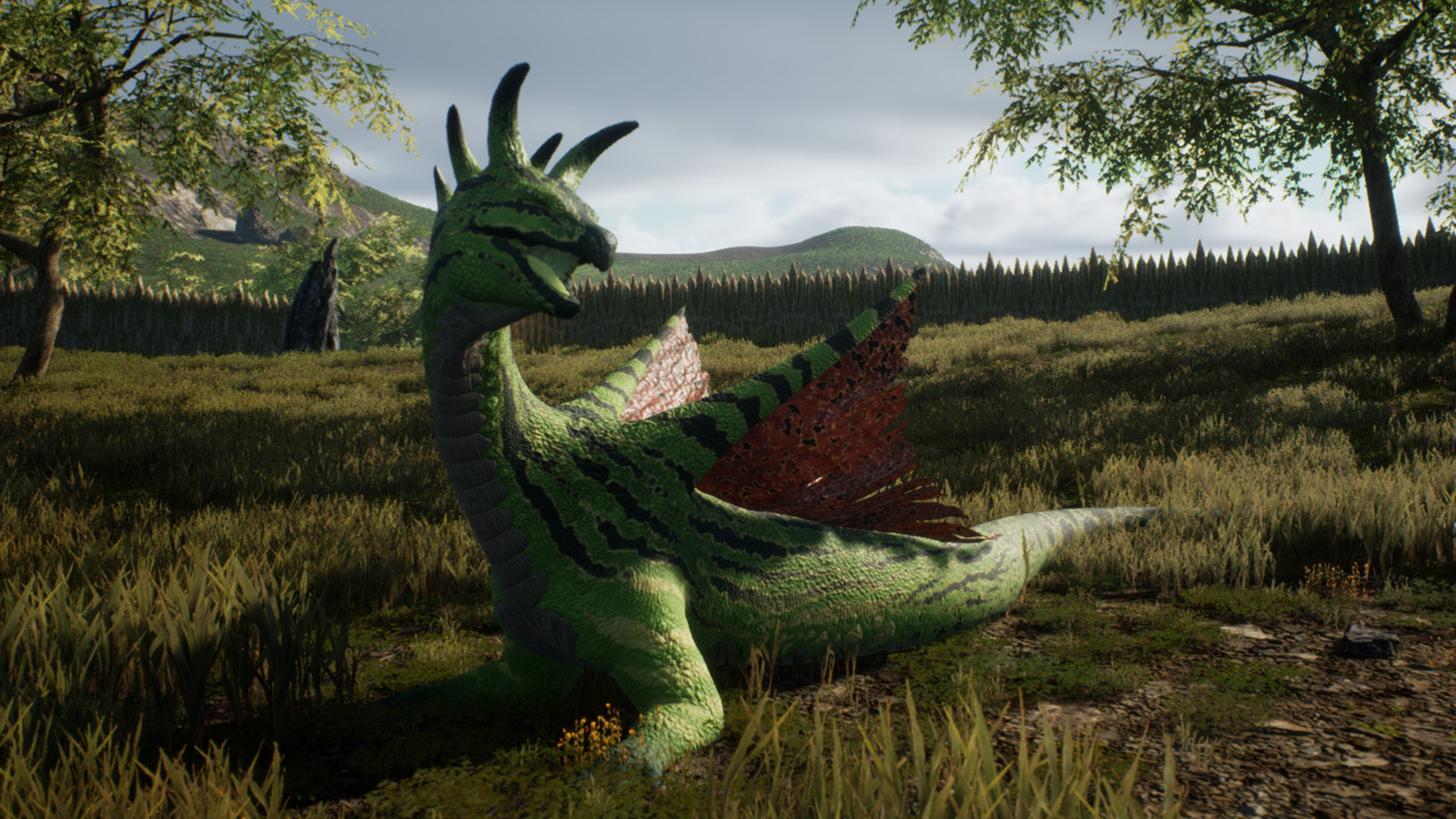