The heart of the system is still a swappable Compute Element housing many of the core components, including a tiny motherboard, but it now comes jammed inside a bigger chassis. “No more playing around,” Intel says.

Note that I said bigger, not big. This is still a compact system, built around an 8-liter chassis measuring around 14 x 7.4 x 4.7 inches (357 x 189 x 120 mm). Inside sits that Compute Element cartridge containing the motherboard, processor, RAM, and storage. This enables both a wholesale system swap or piece-by-piece upgrades when and if the desire arises.

There are two base models—the NUC11BTMi7 with a Core i7 11700B processor, and the NUC11BTMi9 with an unlocked Core i9 11900KB processor. Both are 8-core/16-thread CPUs based on Intel's 11th Gen Rocket Lake architecture, which is its newest (until Alder Lake arrives later this year).

Pricing starts at $1,150 for the Core i7 model and $1,350 for the Core i9 configurations, each outfitted with a 650W 80 Plus Gold power supply. In both cases, you need to add your own RAM, storage, operating system, and optionally a discrete GPU (which you'd definitely want to do if you plan to play games with this).

So it's not a cheap setup by any means. It is fairly flexible, however, with the potential to be a high-end gaming PC. To that end, the Beast Canyon NUC supports up to 64GB of DDR4-3200 RAM (SO-DIMMs) and houses four M.2 slots, split evenly between supporting PCIe 4.0 and 3.0 SSDs.

Then there's the GPU support. Intel says you can cram a full-size, dual-slot 350W graphics card measuring up to 12 inches long inside the NUC 11 Extreme. It can be a tight fit, as our friends at Tom's Hardware discovered, but the potential is there to install a meaty graphics card inside this thing. Obviously the major caveat here is… if you can find one.

Wireless connectivity consists of Wi-Fi 6E and Bluetooth 5.2. As for the port selection, the Beast Canyon NUC serves up a 2.5G Ethernet port, a single HDMI 2.0b output, two Thunderbolt 4 ports. eight USB 3.1 Gen 2 Type-A ports (six in the rear, two up front), a 3.5mm front-mounted headset jack, an SDXC card slot (plus whatever ports are on your graphics card), and a Kesington lock slot. You'll also find two pairs of headers inside (USB 3.1 and 2.0).

I've really come to appreciate SFF systems over the past few years, as they have become more powerful and capable (I hail from an era when hulking full tower desktops were a lot more common than they are now). Color me intrigued by the Beast Canyon NUC (minus the pricing premium), which Intel says will be available to purchase in the third quarter. 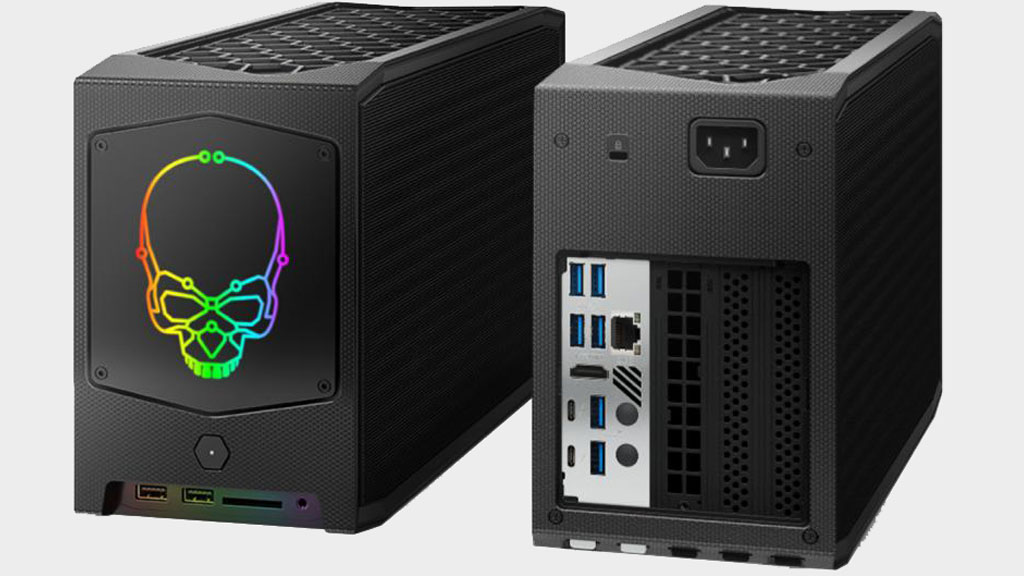