Logitech G Gaming Handheld. Thanks to leaked images, we now know what the handheld and its UI will look like.

The three images that found their way to Evan Blass' Twitter account were quickly DMCA'ed by Logitech G . The speed at which Logitech G responded gives me a feeling these photos are the real deal.

They show a cute white handheld with black and key lime green accents. It looks smaller and more ergonomically friendly than the Steam Deck—it reminds me a bit of the WiiU gamepad. It's tough to gauge how big the thing is, but it looks slightly smaller than the Steam Deck.

One of the leaked screenshots includes the UI (or at least a work-in-progress version), with icons for some of the apps available from the Google Play Store such as Steam Remote Play, Nvidia GeForce Now, Google Chrome, Youtube, and Xbox (twice, for some reason). Logitech G has already said that the device will support multiple cloud gaming services. At least now we have an idea of which ones.

Logitech G has yet to reveal what operating system G Gaming will run, but seeing the Google Play Store pretty prominently in one of the images tells us it's most likely an Android device. An Android gaming handheld is a bit of a departure from all the recent Steam Deck rivals we've seen that run off a version of Linux or Windows.

Android phones and tablets already make pretty decent game streaming devices, so it'll be interesting to see if people will hop on board. Once we learn its CPU and GPU specs, we'll be able to tell if Logitech's handset will be a decent emulation device, or limited to streaming games. What kind of display it has, how long the battery lasts, and pricing remain big questions. 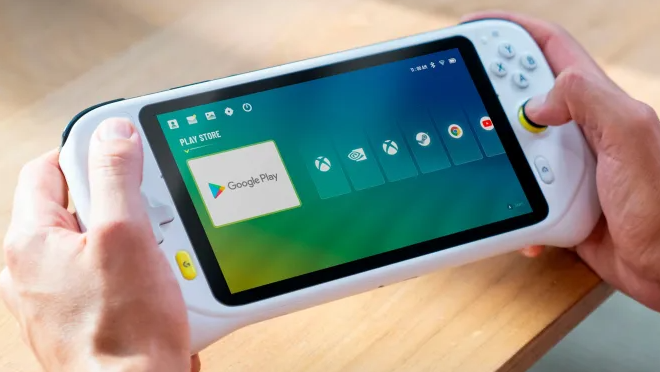