G923. Admittedly, there have been many cranks of the wheel for what's all but the same product over the years—”if it ain't broke, don't fix it”—but I promise you the new driving gear on my desk today are anything but the same old thing respun with a different number attached to it.

The Logitech Pro Racing Wheel and Pro Racing Pedals are a frightfully powerful combination for sim racing. The gear-driven motor system so often found in Logitech's racing wheels is gone. In its stead, the Pro Racing Wheel comes with a direct drive motor that will shake you all the way down to your little racing booties.

Need proof of that? Logitech's Pro Racing Wheel delivers a staggering 11Nm (Newton metres) of torque. That's a massive amount of power to throw behind a racing wheel for a PC. If I hadn't already rigorously stress tested my largely cardboard Ikea desk by standing on it multiple times to reach for something dangerously high up, I'd have suspected it would've ripped it in two by the sheer strength of the wheelbase motor. At the very least, it's more than enough power to ignite that feeling of being behind the wheel of a race car as you throw it nose-first into a corner at high-speed (or perhaps into a barrier).

While there are direct drive wheelbases that can deliver torque in excess of 25Nm, the Logitech Pro Racing Wheel is comparatively powerful in its price bracket. Compared to the Fanatec CSL DD I have to hand, the Logitech's 11Nm appears practically immense next to the Fanatec's baseline 5Nm. However, the Fanatec wheelbase is capable of delivering up to 8Nm torque with a secondary adapter for extra dosh.

In regards to price, the Fanatec CSL DD 5nm kit is a little cheaper than the Logitech Pro Racing Wheel at $700, or $850 with the beefed up 8Nm boost kit, and it also comes with pedals. Whereas the Logitech G Pro Racing Wheel will set you back $1000, and if you want its excellent pedals as well, you'll have to buy them separately for $350.

I certainly prefer to set up my racing wheel knowing that I'm going to be able to extract all the performance out of it right out of the box, though the Logitech does appear the less flexible option of the two considering its premium cost. There's more wiggle room in the cost of a Fanatec package, depending on what you want out of it.

There are other reasons you might want to consider Logitech beyond a raw power advantage, however.

For starters, the Pro Racing Pedal set is absolutely superb. Yes, it is sold separately, and no it's not exactly cheap. But it's actually quite a good offer for the price. This is a three-pedal set, including two metal plated brake and clutch pedals and a large gas pedal. That's not the best bit, though the inclusion of a clutch pedal as standard is much appreciated. The best bit is that the brake is a load-cell brake, which is something of a must-have feature for a racing sim fan that wants to really mimic the feeling of a race car's brake system. Where a cheaper pedal might measure through travel, alongside a spring to add resistance, a load-cell brake measures via pressure. For that, it is a far closer match to real-life. Trust me, you can feel the difference in action.

Not only does the Pro Racing Pedals come with a load-cell brake but it also feels superb under foot. The construction of the pedal set is unlike anything else I've used. It's very smartly designed to hide away any cables and make it so it's a simple and quick job to shift the location of each pedal to your preference. You just need to loosen a handful of bolts and you can shift the pedals side to side, which amounts to a quicker and more granular adjustment process than on the Fanatec CSL pedal set.

As I mentioned before, the load cell is the ideal brake system for replicating the feel of a real race car's braking system, but it does come with a stipulation in order to use it effectively: you need to fix or butt it against something to make sure it's secure, as a load-cell brake will require you to hoof the pedal with all your might to engage it.

While relatively stable by comparison to many of the racing wheels I've tested lately—including those from Thrustmaster, Logitech, and Fanatec—there's really no getting away from the gradual slipping that will happen in some capacity when you put your full weight on the brake pedal. For better results, you'll want to butt the pedal set up against the wall or install it within a larger frame. I went for the former and it worked a treat, though I'm eyeing up a more permanent racing rig solution. Just need to find somewhere to put it first.

Upwards from the pedals, Logitech has paid similar attention to detail in crafting the racing wheel itself. The wheel is fully removable and comes with a quick release so you can feel like the real deal as you disembark your machine at the end of a long and tiring race. Or if you want to throw your wheel away in pure rage because someone smashed into the back of your car for the upteenth time in an online F1 22 lobby and you can't actually believe it's happened again. Why can nobody make it around the first corner?!

Sorry, but it seems even the best racing wheel in the world won't teach you to back off and fight another day.

Anyways, the wheel is available in either PlayStation or Xbox livery. There are only small differences, namely button labels, so you're free to pick your poison. Both work just fine on PC, so PC gamers needn't worry about compatibility, but I've opted for the PlayStation version for this review.

The Pro Racing Wheel comes in at 300mm in diameter, which is on the larger side, though I have found it to be a good fit for a wide range of racing games despite its size. It's certainly very comfortable to use over long periods and for relatively disparate driving experiences: I've been testing across F1 22 and WRC 10, two racing games that couldn't be further from one another, and the wheel is accurate and responsive in both. Though they are actually seeing the wheel as two fundamentally different things.

You see, one of the strengths of buying one of Logitech's more popular racing wheels is that, as they're so popular, they're very widely supported in racing games. With a new wheel like the Pro, there's no longer a fully-functioning preset for your wheel ready and raring to go as you boot a game. That can sometimes mean you just have to make one yourself, as is the case with F1 22, and Logitech has created a very handy webpage that will guide you through the best way to go about it. But in other games, like WRC 10, you will need to engage compatibility mode, or essentially, G923 mode.

A compatibility mode isn't exactly a wild new idea in the world of racing wheels, many wheels offer them, but they are a handy technique to ensure functionality with a wider range of games. Those games that may have once been a complete nightmare to add wheel support to. You're already thinking of Forza, but I'm not going to say it.

I mention compatibility mode because when you read this next part, you should bear in mind that some of the functionality isn't available in G923 mode, though most of the important stuff is.

The G Pro Wheel is highly customisable. Either through the Logitech G app, or, as I found myself doing most often, via the display on the wheel base itself. From here, it's easy to adjust settings on a per-game basis. You can even set up multiple profiles to keep track of these settings for each game, including options to adjust force feedback, Trueforce feedback, maximum wheel rotation, brake pedal sensitivity, and even what you want to use the second set of paddles on the rear of the wheel. These are stored on the wheel base too.

Speaking of which, this is another of the features that is worth talking about on the Pro Racing Wheel. You have your traditional paddle shifters on the rear of the Pro Racing Wheel but also dual clutch paddles beneath. The gear shifters use a magnetic actuation, which makes for incredibly swift and tactile response, however, the dual clutch paddles are a more gentle actuation. Though that's handy for nailing smoother starts off the line. Though that's only half the story. Via the aforementioned settings on the wheel base, you can set these dual clutch paddles to act as different functions. Perhaps the best use I've found for it is using the clutch paddle as a handbrake in games where that might be required. For someone like me without a dedicated handbrake accessory, this feature is great for nailing drifts (or trying to).

Though as I said before, that awesome customisable paddle functionality is only available if you're opting to run in Pro mode, and not G923 mode. And unfortunately games like Forza and WRC, which I find myself trying to drift in, are better suited to G923 mode. You can try and program your own controls in these games using the Pro mode if you don't mind tinkering for 20 minutes before gaming, however, so don't completely discount your favourite racing games if they're only recommended with G923 mode.

There is so much customisation on offer with the Logitech G Pro Racing Wheel and Pedals and it's all within easy reach. Even the impressive force feedback can be adjusted to better take advantage of the information available to it on a per-game basis, and I'm talking about Logitech's own Trueforce rumble feedback feature here, too.

Trueforce isn't necessarily a reason to buy a racing wheel, but I'll take it when offered. It's effectively a way in which minor, let's say, atmospheric rumbles are picked up from the game engine and translated through the wheel into your hands and arms. It'll change how you perceive driving on a gravel road to smooth asphalt, or if you lose control and veer into grass becoming a very expensive, high-speed lawnmower. You'll feel the difference, and it's a neat effect.

But I'm impressed with the Logitech G Pro Racing Wheel and Pedals. Not only because of the serious step up in performance that this set offers over Logitech's more popular G923-style models, but also that a direct drive wheelbase and high-quality wheel feels a very obvious step forward for Logitech's racing wheels if done correctly, and Logitech has absolutely done it correctly here. I have no qualms about recommending the Pro Racing Wheel and Pedals for the racing rookie looking to level up their sim experience, or indeed even a more seasoned racer with ageing kit that needs a lick more power.

However, I will say there's still absolutely a place for more modular kits, such as those from the likes of Fanatec. The ability to piece together a racing sim rig over time, starting off with a cheaper, upgradeable unit, does appeal to me on a more practical level, and there's no getting away from the complete Logitech solution's $1,350 price tag all-in. That's a lot of money to drop in one lump sum.

But I wouldn't say you would come away disappointed had you spent that money on this racing wheel. The Logitech Pro Racing kit feels as much a high-end offering in power and performance as it should for the price, and it'll come as no surprise that every detail and every material screams premium, long-lasting quality as we've come to expect from Logitech over the years. 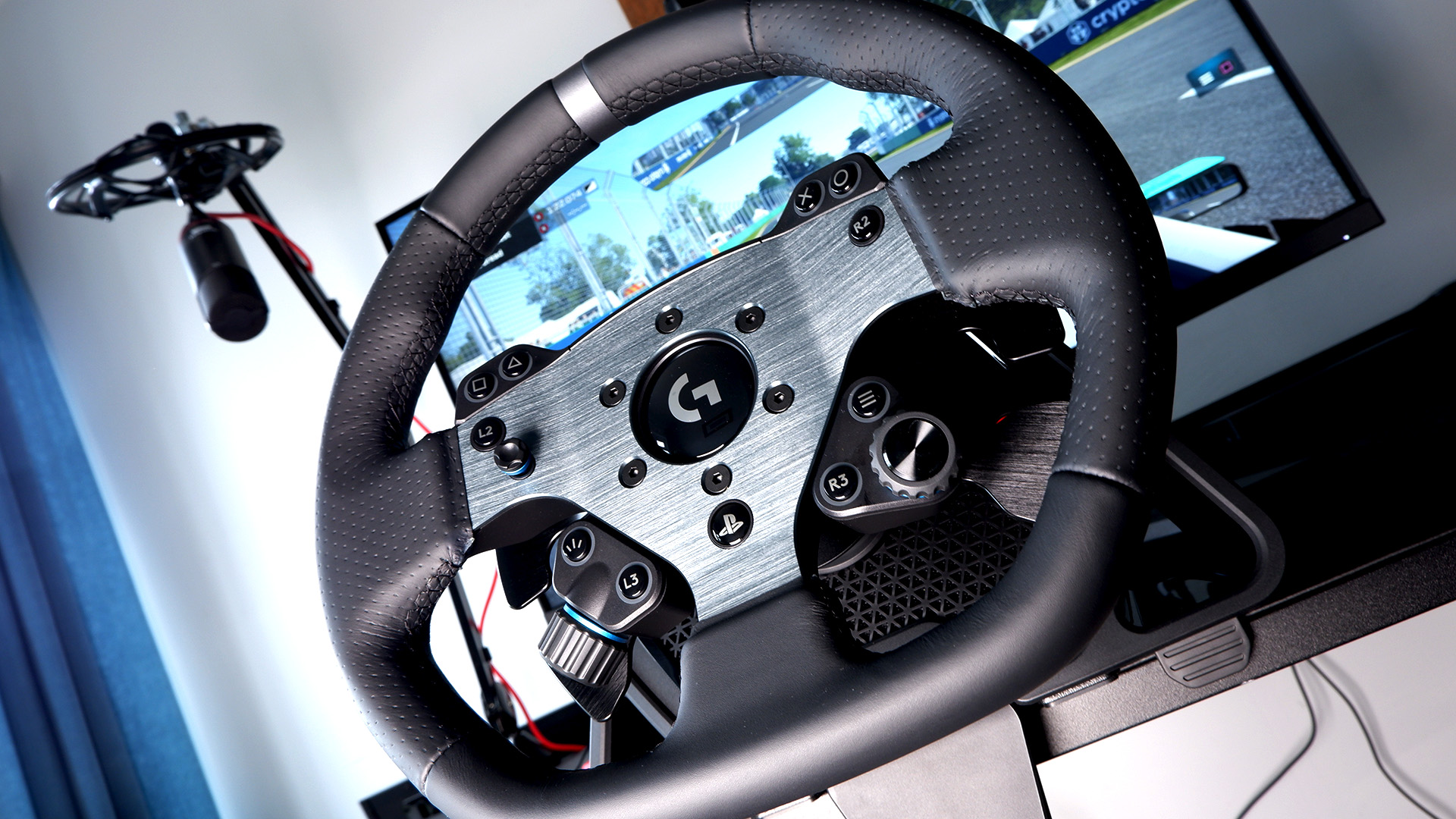