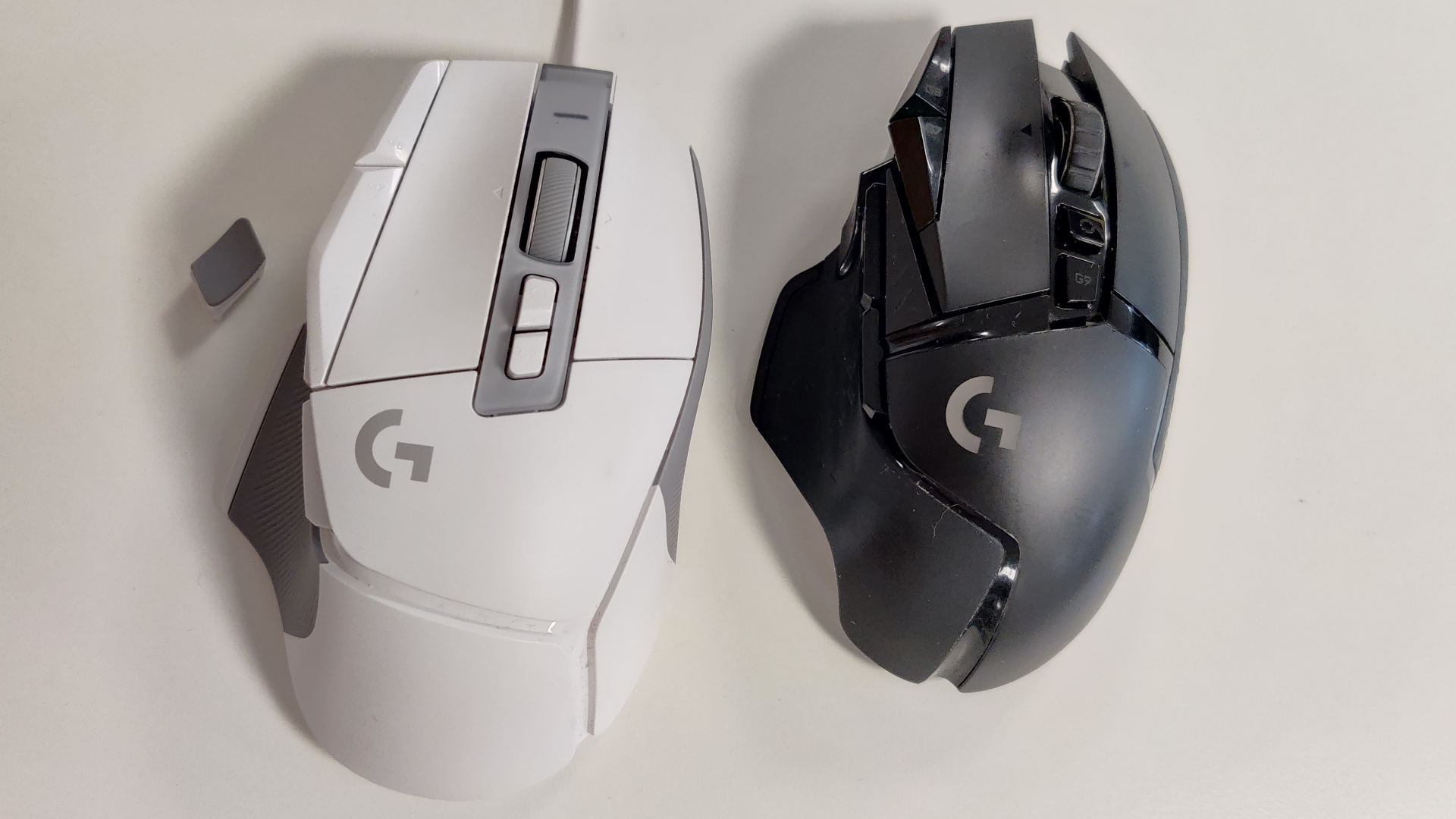 G502 Hero 25k sensor, there are some impressive ergonomic enhancements to note, along with customisability, and weight improvements to boot.

In fact, Logitech has doubled down on making the Logitech G502 X lighter. It comes in at 89g, which is a significant difference over the Hero's 121g. Sadly, it doesn't come with the option to configure the weight like the Hero, which would have been a nice addition considering it's going for the same price as its predecessor.

In order to improve the weight, several changes have been made. For one thing, there's no LED system behind the Logitech G symbol, or any RGB at all. And while that's a little disappointing that you can't program damage flashes on your mouse, for example, it makes sense to appeal to the FPS audience more. At least, while the scroll wheel is now plastic instead of metal to improve the weight, it still comes with an infinite scroll.

The infinite scroll is our Dave's most loved feature and I'm sure he would have written a strongly worded letter if Logitech had done away with his precious spinnies. We've decided between us that the plastic scroll wheel doesn't feel as nice as the old metal one, but we're also both not too bothered about having a heavy mouse. It's a trade-off, for sure, but one that does benefit Logitech's target market in the long run.

Comparing the G502 X to my absolute favourite gaming mouse, the Logitech G502 Lightspeed, I've spotted some subtle differences that might not seem like much, but do affect the overall experience.

Interestingly (and most evidently) there's now an interchangeable thumb button with a little lip that can be rotated. I assume for use with larger or smaller hands, though hand positioning could also be a factor. It can be swapped with a lip-sans silicon button that, when rotated, can act as a stopper instead of a button. It's a neat little feature, perhaps aimed more at fingertip grippers. Either way, the thumb button in all its forms is a great addition that gives the G502 X that bit of extra customisability, without adding weight.

One of the more obvious changes comes in the G502 X's colour options. While there are both black and white versions of the G502 X, both have white PTFE feet. It's an interesting stylistic choice, one that seems to mimic Logitech's overall shift toward a more inclusive range or peripherals—such as with the Logitech Color and Aurora collections, but it is stark and very likely to get mucky quickly if you've an affinity for munching snacks at your desk.

The major difference comes in the form of the angle of your hand. While my initial qualm was that the lower profile shell meant my wrist was leaning on the desk a lot, my hand has now shifted around to the intended position. I get it now. It's slightly skewed, similarly to those vertical mice that are all the rage at the moment in offices, which gives it superior ergonomics to the simple flat, front facing hand placement of the original design, without it taking an age to adjust.

Pair that with the fantastic thumb rest, longer buttons and you have yourself a superbly ergonomic mouse that boasts improvements we didn't know we needed from the Logitech G502 line.

Another change that's not so evident to begin with is the lightforce hybrid switches. They're opto-mechanical, so they combine optical speed with a mechanical actuation. It's not something that's easy to test, speed wise at least, though I've been sitting here clicking the G502 X next to its predecessor for a minute, looking a bit strange in the process, and I can't feel much difference. There's a slightly more resounding click to the newer switches, which is probably owing to a lack of internal components in order to improve the weight. The switches also require a tiny bit more force to activate but it does mean you're less likely to accidentally snipe your own teammates.

As far as pricing goes, it's being shipped at roughly the same price as the earlier models: $80 for the wired version, $140 for the wireless version, and $160 for the G502X Plus. The latter is the only one with RGB, which pushes the weight up 106g, over the wired version. It's certainly one way to separate the company's more utilitarian users from the rest, but $20 for some RGB LEDs does seem a little steep.

The wired version here is the evident choice for the sensible and frugal among us, and the wire actually doesn't create a detriment to the usability. It's long and flexible enough that it doesn't get in the way, and although it's not braided like some of the previous model's cables, it doesn't snag or curl up.

I can't say there's a lot to complain about with this one. I personally regarded the previous model as the perfect mouse, and it's almost a shame to remove the weight it had behind it, though I do admit the ergonomic changes are likely better for my hand. The new ergonomics do have the potential to alienate those with larger hands or who don't enjoy the sideways slant, and the weight reduction has meant RGB likers like me would need to spend substantially more. But FPS players with average sized hands are likely to be over the moon with the G502 X.

None of the negative points are enough to put me off one of the best lines of mice ever to grace my desk, and the overall improvements certainly outweigh my personal preference. For $80 I have no issues recommending the wired G502 X, it's just a little sad that RGB now costs extra. 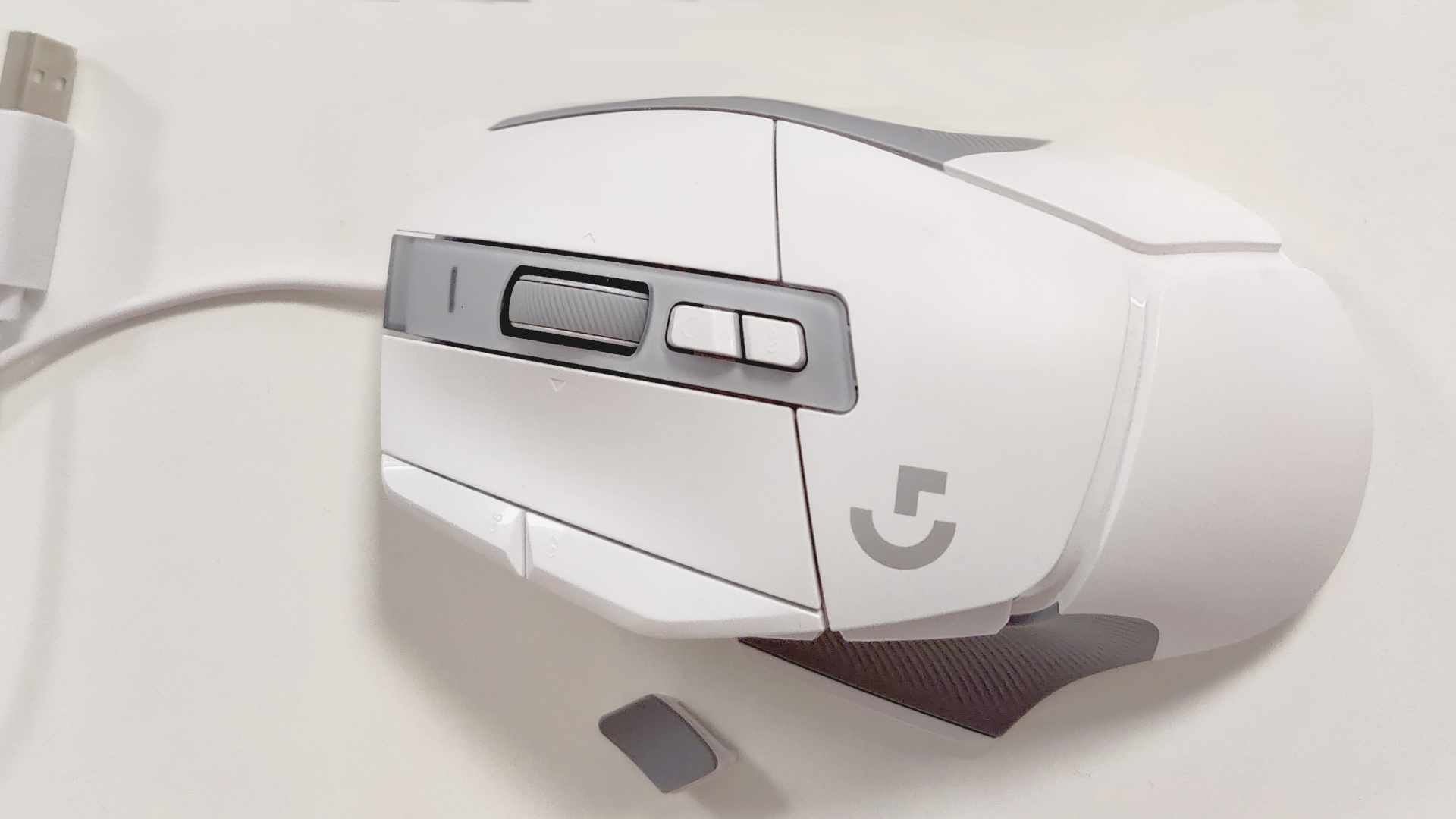