Aurora peripheral collection, the Logitech G705 was designed with inclusivity at its heart. The main draw is that it’s smaller and lighter than a lot of gaming mice out there, along with the fact that it comes in a colour other than stark black. And while there’s much to be said about peripherals finally being designed with us small-handed humans in mind, I feel a bit strange about paying $100 (£90) for what’s essentially, half a mouse.

Alright, that’s a bit dramatic, and that doesn’t actually make it a bad mouse, but it does mean it’s better suited to certain kinds of gamers. Let me break it down.

This mouse is incredibly small, almost comically so. Even for my little hands, there’s a distinct lack of mouse here. It comes in at a 39mm height, with a width of 68mm and a length of 106mm. It’s just a few millimeters smaller than Logitech’s already tiny G5 gaming mouse, and genuinely one of the smallest mice I’ve ever seen.

My hand is roughly 170mm x 75mm and I’m dragging my wrist a lot; there’s really not a great deal of mouse to grab hold of. And although it’s a little small for my part claw, part palm grip, fingertip grippers, and those with smaller hands than my own might be more pleased with it.

With a gentle slope, beautifully rounded edges and curvature to rival the Buddha himself, this is a truly ethereal mouse.

Still, we’re looking at a sleek little mouse with a gorgeous, cloudlike aesthetic. Ergonomically, the G705 feels like a soap bar in hand, with a gentle slope, beautifully rounded edges, and curvature to rival the Buddha himself, this is a truly ethereal mouse. I’m always happy to see a thumb rest. My main issue comes in the form of its slight lip underneath the thumb rest; although it adds to the rounded look, it does mean it rocks when you press down on it, which the sensor often picks up on as movement. Essentially, those who are heavy on the thumb may want to consider a different mouse.

Logitech professes a 40 hour battery life with lighting on, which I can fully attest to. I’ve only had to charge it once for the entire week and a half I’ve been using it, though I’m not gaming eight hours a day, just writing weird articles and gaming in the evenings. You get even longer if you turn the lighting off, though I prefer to leave it on—the RGB lighting may not be the most accurate, but it’s still very pretty, even though it’s limited to the back rim of the palm plate.

While there are some gaming mice out there with 240 hours of battery life like the Logitech G604 Lightspeed, that’s always felt a little excessive to me. I don’t think I’ve ever been away from a power socket for that long, and my laptop would have died after an hour anyway.

Of course, the size of the battery is limited by the shrunken shell, but it’s also helped to reduce the weight down to 85g. That means it’s easier for competitive gamers to sling around in FPS games, though as I’ll get onto in a moment competitive gamers may not be as pleased with the sensor. It’s certainly no 66g SteelSeries Aerox 3 Wireless at the top of our best light gaming mouse guide, and the it’s still double the weight of the absolute lightest mice out there, but at least you don’t have to put up with the awkward, easily soiled honeycomb hole pattern. I think that kind of aesthetic choice would have compromised the essence of the mouse, too, so I’m glad Logitech didn’t pander to the trend.

While I’m still on the subject of halves, some may be disappointed that the Lightsync sensor has been used as opposed to the 25K Logitech Hero sensor. What it means is you’re only getting a DPI of 8,200 so it’s not as accurate as some of the top mice out there today with 16,000 DPI and above. On testing, there was a lot of variation in the polling rate consistency compared to mice with the Hero sensor. Overall, though, your average gamer shouldn’t notice much difference. 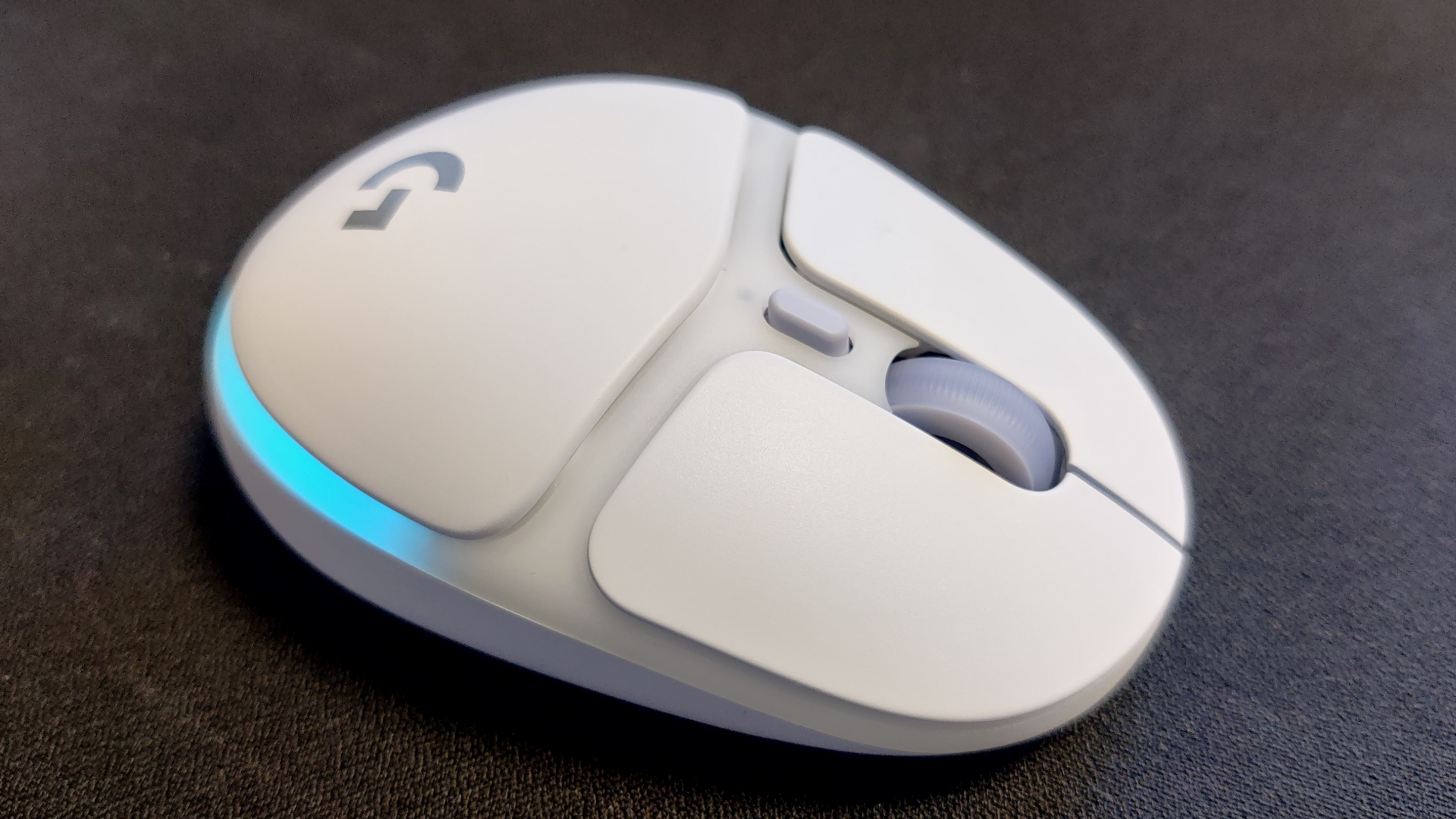 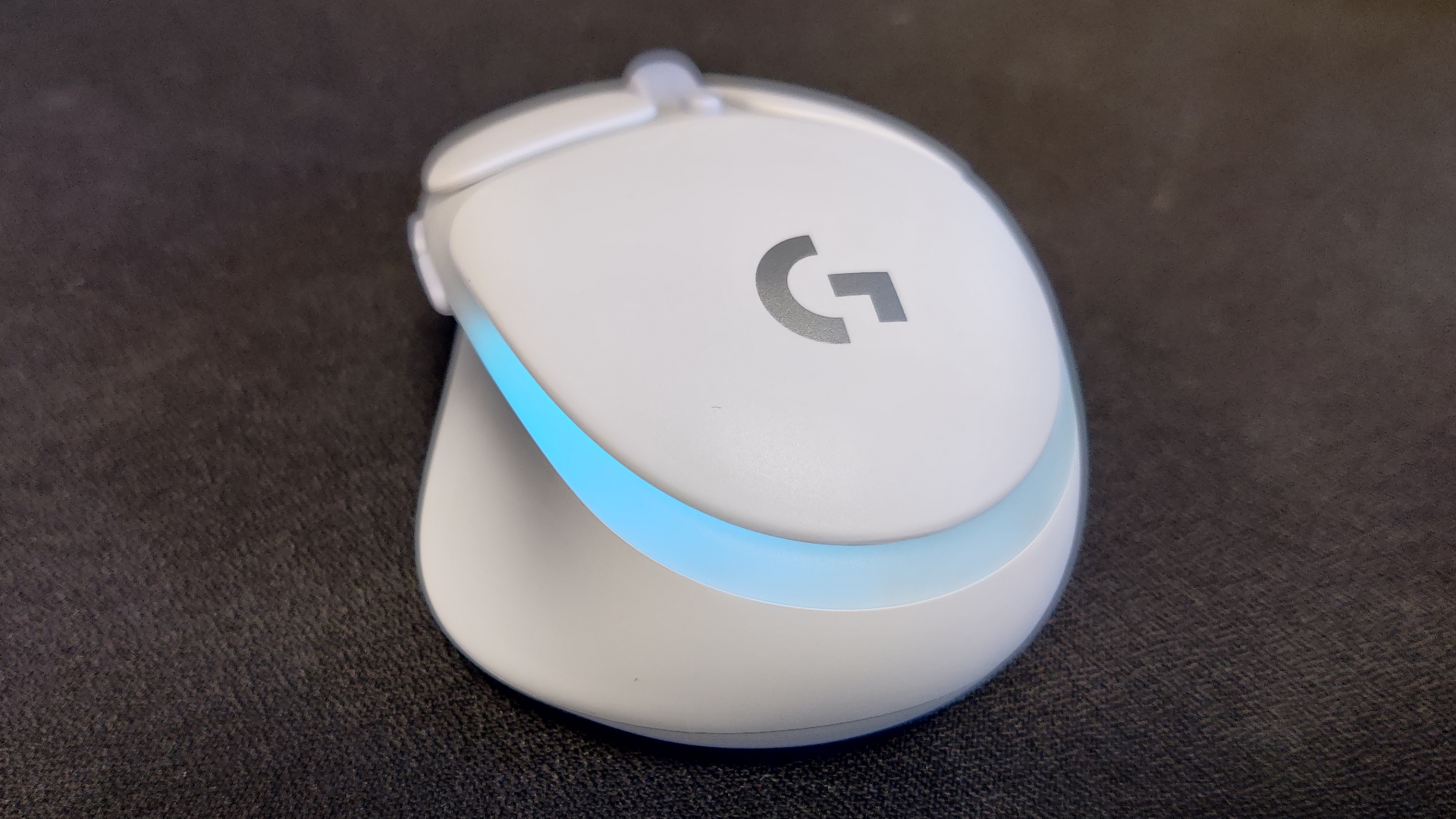 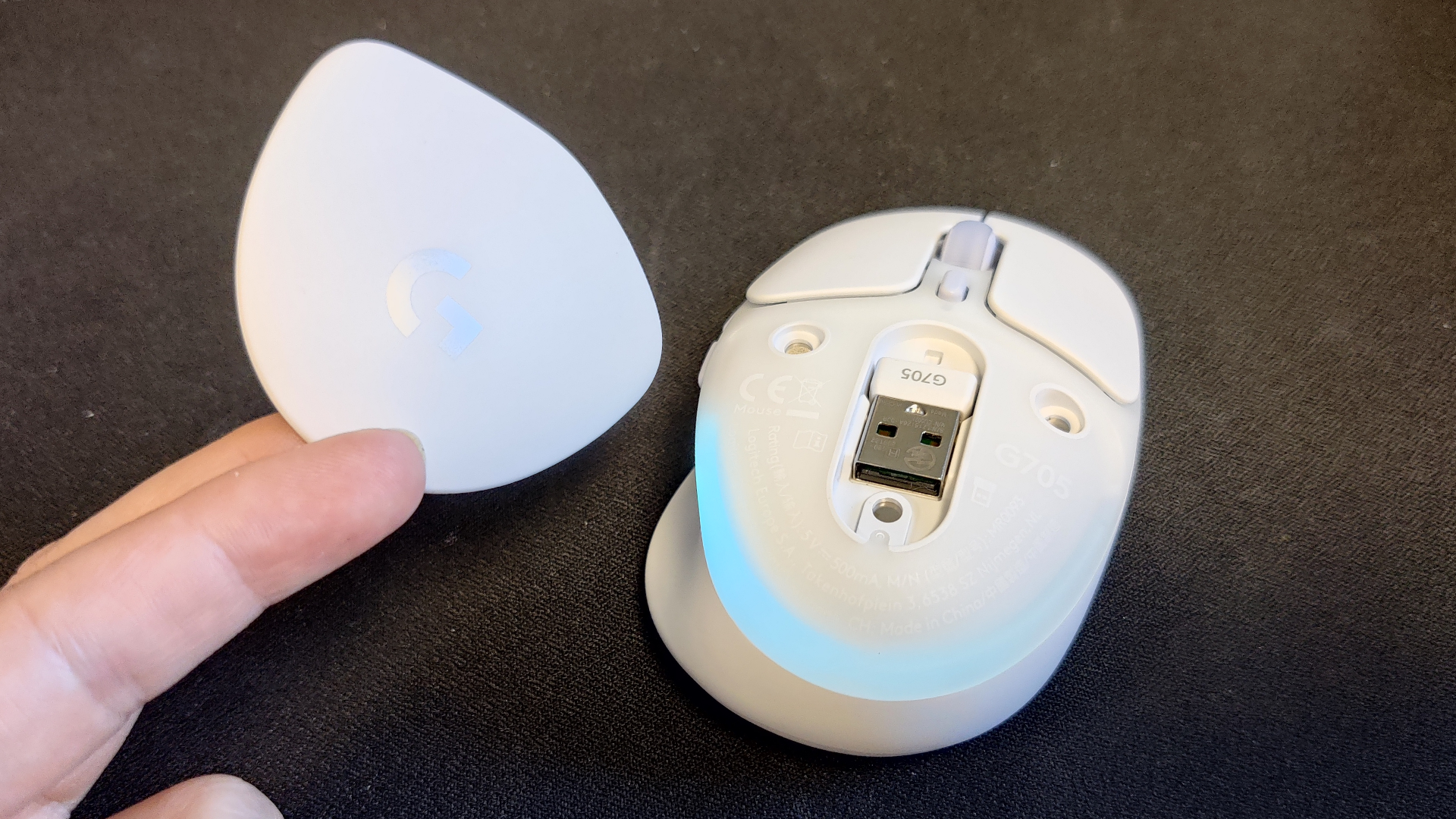 Logitech has missed a trick, though. One of the main draws of the Aurora collection is the modularity, and although the palm plate on the top does come off so you can access the dongle’s cubby hole, it’s not actually swappable. Sadly, the only accessory for the G705 is a brightly coloured mouse pad that comes in either white mist, pink dawn, or green flash, though it’s an extra $30 (that’s without wireless charging or any other fancy features). It does mean that the mouse loses out on a major selling point of the Aurora series.

I’m a bit sad that the cable that comes with the mouse is so rigid, considering it’s such a tiny mouse, competing with a thick cable is a bit of a task. That being said, adding support for USB Type-C is great, and you have the option for wireless connectivity via Bluetooth or Wi-Fi dongle too. There’s also no proprietary shape limiting you to the rigid cable so you can always swap it out for a decent one. Still, for the price I’d have liked something a bit more practical.

You can get the Logitech G705 for £84 in the UK already which is a little more reasonable than the MSRP. For the US folk, things are a little different, and $100 is a lot for what you’re getting. Sure its darn portable, and the battery life is nifty, it even fits neatly into an ergonomic niche, but there’s little here that’s worth raving about.

It does look pretty darn adorable, though.