Aurora series. The peripheral designs in this collection are based around a “dreamy aesthetic,” with customisation and inclusivity at their heart. Much like the company's Colour Collection, the designs move away from stark black shells, and invite more customisation with options in their “ethereal” pastel colourway. But there's a bit of a catch, which I'll get to in a moment.

When it comes to the “low-key vibes” G715, there's a lot to like: great Bluetooth and wireless connection, dedicated media controls, and excellent all-over build quality. The company has also run with an awesome bubbly aesthetic, opting for rounded everything, as well as large gaps between the keys for those typing with tenacious talons.

At first glance I should also be revelling in the fact that Logitech hasn't forced us to stick to a single all-over colour, as is the case with most big-name keyboards out there. Here, we're actively encouraged to express ourselves by mixing and matching the funky face plates and keycaps on offer. The colour options are the same across the entire collection. There's the base colour, White Mist (literally just standard white), Pink Dawn, and Green Flash. The more colourful of the three do look fantastic, but there's a catch: pretty colours cost extra.

The white base keyboard itself comes in at $200 (£170), but then if you want it to look anything like the advertising material, you've got to splash out an extra $20 (£17) for a magnetic, replaceable top plate. Then it's another $40 (£35) for a full set of colourful keycaps—there's not even a way to purchase a few select keys on their own for a little flair.

The swappable top plate is a nice thought, and since it's not CNC milled it's a lot cheaper than something like the alternative top frame for Glorious' GMMK Pro. But all this colour mixing malarkey feels like a bit of an afterthought, one that brings the cost of the advertised colour combos up a little higher than seems fair for what's being advertised.

It's like when you get to the checkout only to be told the price tag didn't include tax—rude.

Still, I'm glad the Logitech G715 uses GX switches; the Cherry-like cross stem of the GX switch allows for some level of compatibility with aftermarket keycaps. That's in contrast to the proprietary approach of many previous Logitech keyboards that used Romer G switches, or the Logitech G915 Lightspeed's low profile GL switches.

The GX switches  are rated at a lifespan of 70 million keystrokes, though, and they feel great. I'm usually a clicky gal, but the feel of these linear switches has made me think twice, especially as they don't suffer from that resounding, hollow sound that I've noted using Romer G switches.

It's a little disappointing that an 87-key tenkeyless layout is the only option for both the wired and wireless versions of the G715, as I'm a sucker for a numpad myself. It does manage to jam all the F keys (that can be programmed with macros easily) beneath the media controls though and even game mode and lighting buttons, and it doesn't feel too compact either.

It's a great looking board all over, with little pastel lilac flairs on the dedicated media controls—a feature that should be expected on a $200 board.

All in all, the keys are stable, even when pressing on the corner of the spacebar, and the keycaps are all double-shot PBT (as they should be). That means they should last an awfully long time without ending up with that greasy gloss feeling. The board itself has a minor flex to it, but it's a damn sturdy board as can be said for most from Logitech.

Logitech has also thrown in a padded wrist rest with an interesting cloud-like design, not something you'd expect but it's actually pretty darn comfy with its little groves. It's nothing like the premium feel of the $200 Razer Huntsman Elite's wrist rest, but it's at least padded (and frankly adorable).

Again, there's a lot to be said about the G715's wireless capabilities. It touts a ridiculously long ~30ft range for those of you with vast home cinema setups, and a full charge lasted me around 24 hours of full use—that's over three working days for most of us. And although the board's RGB lighting has some trouble handling colours (light green specifically, which it seems to think is blue), Logitech G hub is still still one of my favourite peripheral softwares thanks to its ease of use and stylish UI. There's also a slot for a single onboard profile, which is nice.

But despite all this, as well as the G715's 2-year limited hardware warranty, it still feels like there's something missing.

For a board coming in at $200, I would have expected some kind of passthroughs, or dedicated macro keys so you can keep the F keys as is. A full size version at least would have been nice for the price, since you can find functionally the same white, TKL boards on the market for under $100. Take the $79 G.Skill KM360 for example, which, although it has no RGB or dedicated media controls, is the same size and colour, and even has Cherry MX switches. Granted, Logitech has done a great job at emulating the feel and compatibility of Cherry switches, but it still doesn't feel like that extra $120 is going toward much except some basic media controls and sub-par RGB handling.

I'm pleased with the build quality from Logitech, as usual, and there are some really great features on the G715, but nothing that makes me think “Wow, that was $200 well spent.” Since the main sell of those mix-and-match pastel accessories bumps up the cost so much after the fact, I'm not sure the plus points here are enough to recommend a TKL board for that price. I feel like the rest of the keyboard enthusiast community will be with me on this one—with the obvious alternative if you're looking for high customisation being, well, build one yourself. 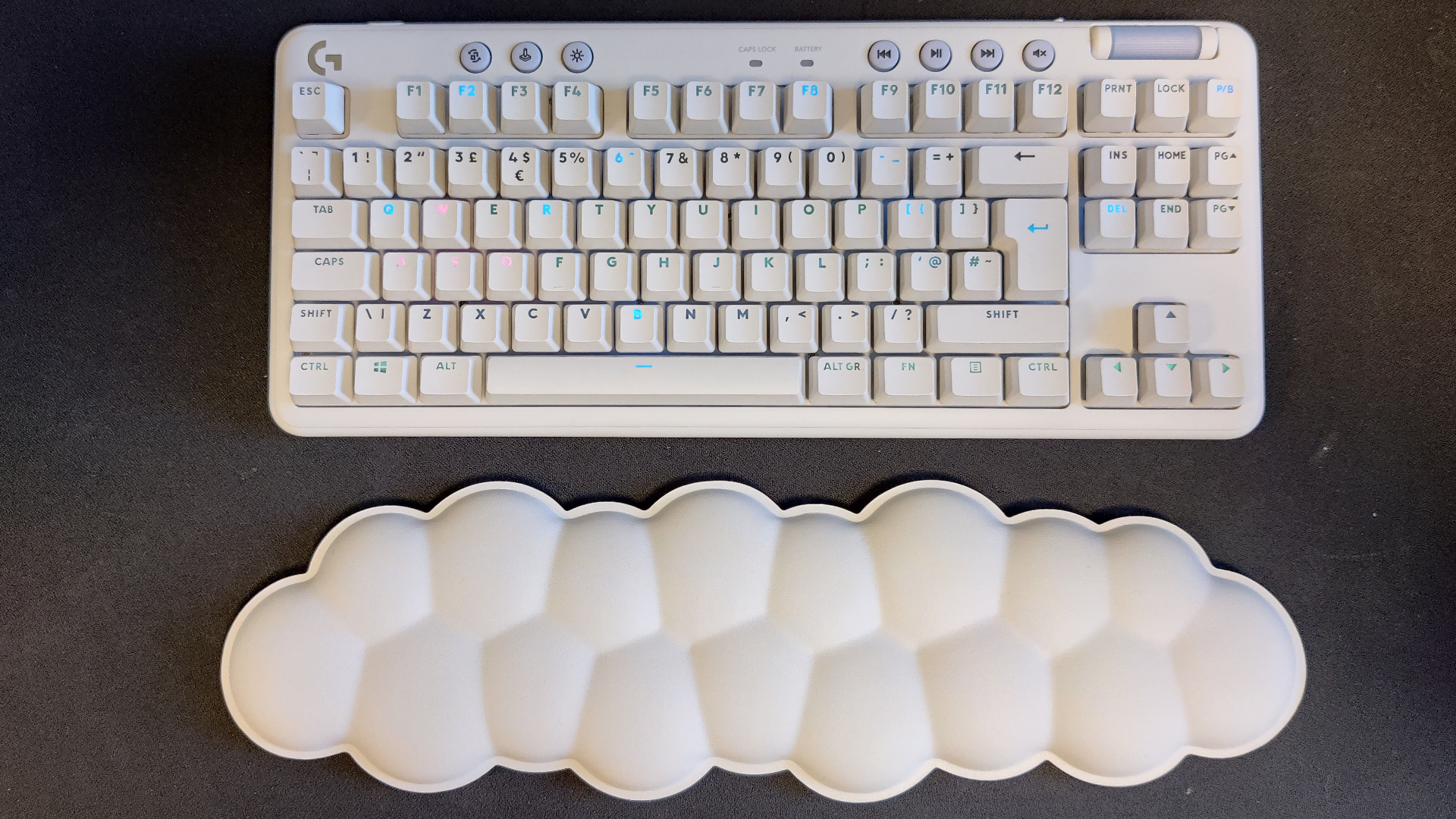