Phoenix Nights, a casino located on Final Fantasy 14's Phoenix server that has been in operation since September 2021. It offers a series of companionship and NSFW packages with its entertainers, known in this venue as Kings and Queens.

I'll admit, in my eight years of casually playing Final Fantasy 14 off and on, I've been heavily sheltered from any ongoings outside of the main story, raiding and roulettes. My first 700 hours or so with the game were mainly spent solo, chipping away at the story and side content. But my latest stint with the critically acclaimed MMORPG has landed me in some fantastic social circles, befriending players who've managed to take this game and spin it into an entirely unique experience.

Many of these experiences take place inside roleplaying venues. While most players who are lucky enough to nab a house will deck it out for their own personal use, there's been an increase in themed locales. Bars, nightclubs, cafes, reading clubs—Phoenix Nights owner Masha Shiri tells me he recently visited an RP restaurant. “You've got saunas, you've got baths, you've got taverns, maid cafes, a lot of them,” he told me. “There is so much choice, so many exciting things, even if you're not down the NSFW route.”

Masha decided to open Phoenix Nights after “losing so much money” gambling in roleplay hotbed Limsa Lominsa. “I spoke to a friend that I had known in Final Fantasy since I started playing, “I said 'I'm so frustrated. Why can't I win at this game?' and he said 'Well, it's stacked against you. And also why don't you just do it yourself?'”

When Masha originally opened Phoenix Night's doors, its main philosophy was bringing an innovative RP experience via clever gambling games. That hasn't changed, but now it's a large house containing three storeys of different activities: Eorzea's own diet Vegas. The top floor is your standard RP nightclub fare, with DJs performing on Twitch and creative drinks that mixologists will make with the help of emotes.

The bottom floor is Phoenix Night's moneymaker: the casino. Up to seven different games are contained across eight tables, and all feel distinct despite relying on the same dice roll command. A couple of tables are hosting recognisable fixture Blackjack, while games like Apple Crash and Phoenixmon (a play on Pokémon) are original creations of the casino's game hosts. Most of these are hosted in party chat to keep things relatively clutter-free, but High Roller Casino Classic is broadcast to every patron within the say chat window's reach. It creates an exciting atmosphere, and as I lurk around the different tables I slowly witness one player lose millions of gil—Final Fantasy 14's main currency—to it.

The venue's foray into erotic roleplay came after Masha noticed a “huge, huge demand” for these services, especially in a post-pandemic landscape where many of us are perhaps a little more isolated and introverted than we used to be. “I think initially when we opened up Phoenix Nights, I was so unsure about delving into the NSFW side because I had really no idea how to handle it,” he told me. “It wasn't really until I took Jessica onboard… that she's sort of opened my eyes up a little bit more to the intimacy, the intricacies and the demand for it, really, there's a huge, huge demand.”

“I handpicked all of them,” she tells me about the venue's Kings and Queens. One such Queen is Shy Corpse. She's a fellow bunny girl, tall and gothic. Her biography describes her as a switch, capable of flexing between dominant and submissive. It feels reflected in her own personal quarters: a room filled with shark tanks and cold decor leads through into head-to-toe flora and fauna, a cherry blossom-embellished bed illuminated by a full moon backdrop. A pond gently runs in the corner, with a stuffed shark mascot toy sitting inside it. “I have a thing with sharks,” she says.

“When I started working here, Jess was like 'let's give you some small educational sessions,'” Shy told me. “She would hire someone and I would basically sit in the room and be like, taking notes while she's domming a person and sometimes then asked me to join in so she could see how my level of ERP was. Then we could kind of play on with each other to actually set up a nice experience. So that was the most intense when we were actually together, kind of interacting with both each other and the client.”

It's clear that both Shy and Jessica are passionate and professional, traits that come at a price. Every entertainer charges a select amount of gil for their time and energy. For Shy and Jessica their rates start at around 500,000 to 550,000 gil, though that varies pretty wildly depending on the client or what they're looking for. They're also paid the same flat 500,000 gil wage that Masha pays all his staff members, meaning they're still walking away with something even on the quietest nights.

It's not all hard work though, it's something that Jess and Shy clearly take a lot of pride and joy in doing. “There was one guy and he was kind of known as a troll basically,” Jess recalls of one of her favourite experiences. “I kind of hinted that I could peg him as a joke. But then one night, he actually came and he wanted to get pegged and after that—you know, he was the kind of one that always has capslock on—but he was always very quiet when I was in his presence… he would just sit next to me whenever I was around. This was a guy that literally runs around all the time, can't be standstill in one place.”

Above all, I get the impression that this is one of the safest places to engage in ERP for both parties. Each entertainer is appropriately vetted without being overly invasive in their personal lives, and there's a lot of trust amongst the staff members. On the rare occasion things go awry and clients break fundamental rules, security is on-hand to safely and swiftly deal with things. Phoenix Nights, like many venues, also doesn't offer its services to players who are lalafells. While the game's lore makes it clear that the miniature race are largely adults, their small stature and childlike appearance opens a gate to muddy ageplay waters that many refuse to wade through.

For the players that spend their hard-earned gil on an entertainer, they know they're getting a safe and comfortable environment to explore a niche corner of roleplaying. Everything is done with comfort, boundaries and consent at the forefront. The stories Jess and Shy share with me are told carefully, with respect to their clients always coming first. “What happens in this private room stays in this private room,” Jess tells me.

“Respect yourself, set what boundaries you are comfortable with, because that's what you're going into. Whether you want to be this character in-game or you want it to represent more of who you are in real life,” Masha says. “Just start from yourself, the parts that you're most comfortable with sharing from yourself in your character or however you want your character to be,” Shy adds. “Is it someone that you created, like an OC, or is it more connected to who you are?”

ERP has somewhat of a bad rep among the community. Jokes about Limsa Lominsa's floor being sticky and American server Balmung's ua-horniness run rampant. But as my talk with Masha, Jess and Shy comes to an end, it's clear to me how much everyone at Phoenix Nights cares. At the end of the day it's a game, one that every single one of Final Fantasy 14's 25 million players has tackled in a slightly different way. Everyone is here to have fun, but roleplay of all kinds in this game is handled with a level of seriousness that I deeply respect.

It's venues like Phoenix Nights and players like Masha, Jess and Shy that make Final Fantasy 14 such a fantastic, vibrant place to spend time in. With so many corners to the ever-growing roleplaying community, no two days in Eorzea feel the same. Next time you're taking a break from that savage raid or tire of levelling, maybe check out what roleplay venues your data center is offering—you might be pleasantly surprised at how much you enjoy yourself. 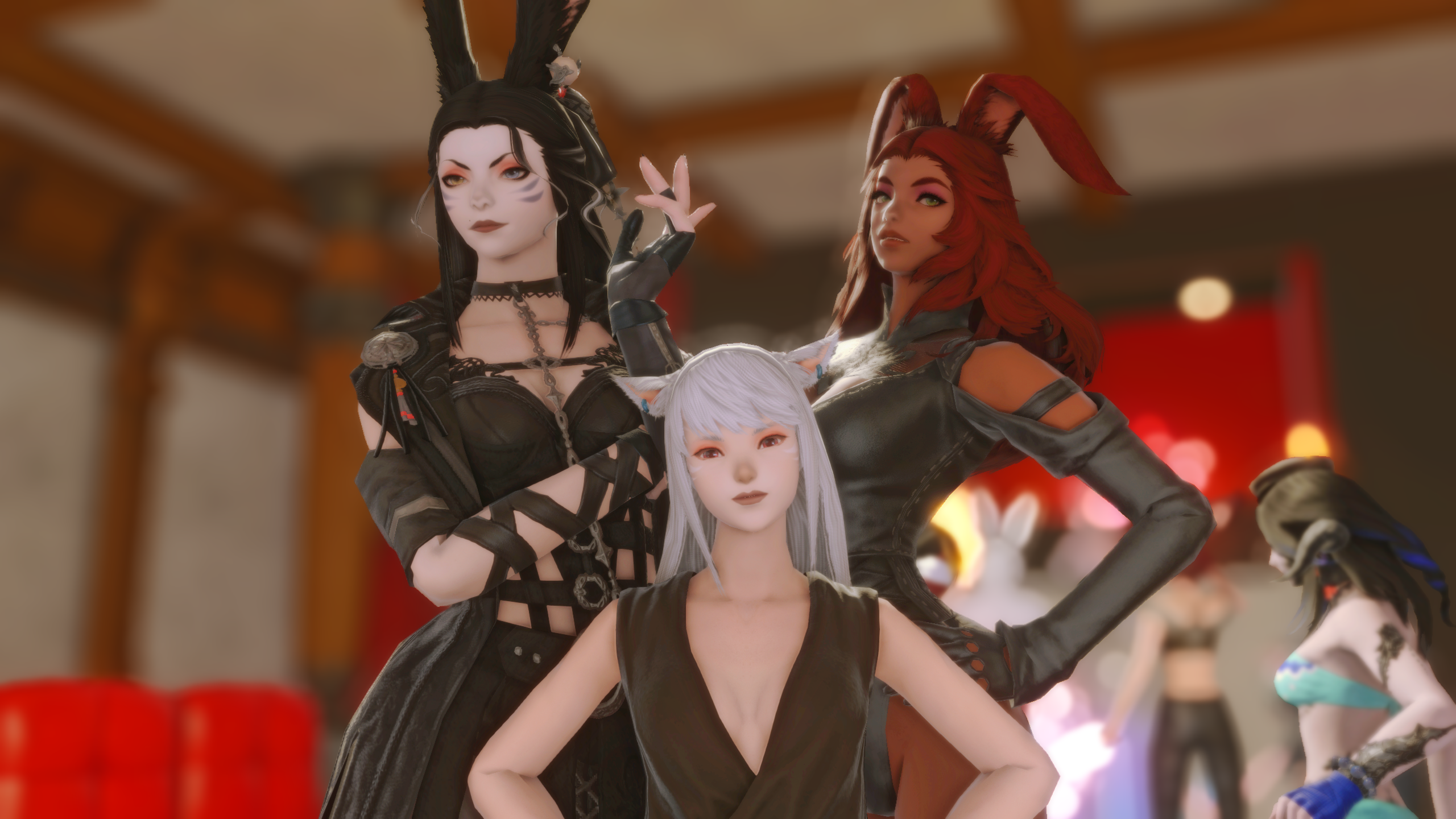