Nightclubs and parties are pretty common in the MMORPG, but advertising them on a real life billboard using modded outfits and the official game logo without Square Enix's permission is most definitely not.

In a now-deleted tweet, DJ Potate, one of the freelance DJs that will stream the event on Twitch, posted a photo of one of the billboards advertising the Summer Bash event. The billboard depicts a Viera character wearing a modded outfit datamined from the upcoming Moonfire Faire event with the official FF14 logo and trademark info below her. There are links to three Twitch channels that will stream it live, the Rain Nightclub Discord, and a Square Enix copyright mark on there too, despite the company having no involvement.

Legit went out of their way, paying literal THOUSANDS just to go get themselves banned and probably even sued.. while simultaneously and potentially pissing off Yoshi P etc even more with the modding in the game.. Screwing over everyone. People really can’t use their brain huh.. https://t.co/Ky95kRPxjoJuly 5, 2022

DJ Potate wrote on Twitter that the billboard follows the Final Fantasy 14 Material Usage License because “the club makes no money/profit.” The trademark and copyright notices used in the billboard follow the policy, but it states that it only covers things like websites and social media services and doesn't explicitly say physical advertisements.

The club's owner did not respond to a request for comment before press time.

PLS remember these clubs are literally made to farm irl money via twitch, these are not RPers, they might baite with ERP but they play “DJ” and stream afk people /beeskneeing. There is no way there isn’t going to be backlash for this from SE. https://t.co/utkWcPIF6yJuly 5, 2022

The Rain Nightclub Discord's main text channel went read-only after a flood of users came in to criticize the event. Most of the messages have since been deleted by the owner.

“So what if we made a billboard, you don't have to look at it, you don't even have to come to our party, but for that to be a reason you go after people that weren't even involved with the idea for it is really sad, and I really hope the portion of you all who came here to troll ignore us and go back to whatever it is you actually like doing since we aren't it,” Revarious wrote in the last message before the lockdown.

Plenty of FF14 players use visual mods to alter the look of the character models, like giving their Warrior of Light bigger muscles or a custom outfit that isn't available in the game. For much of the game's history, mods have been a touchy subject. While technically against the rules, just like UI mods, it's been relatively rare for people to be punished for using them.

In May, producer Naoki Yoshida wrote a stern blog post to reiterate that the developer prohibits UI mods to display information, like damage numbers and boss mechanics, that the game doesn't do by default. A few days later, two streamers were sent to an in-game 'jail' for publicly displaying their use of these types of mods. For many FF14 players, it's still unclear if Square Enix's stance has materially changed or not.

Yoshida also wrote in the blog post that datamining is prohibited, which is why several players are worried about the Rain Nightclub billboard's use of the modded outfit and the effect it could have on Square Enix's attitude towards clothing mods in the future.

So far, nobody from The Rain Nightclub has publicly announced that they've been banned and the Summer Bash event appears to still be on. Data Center travel, however, was temporarily put on hold due to its immense popularity, limiting the event's reach. Given its free admission and the fury of the FF14 community, the party this weekend might be much more chaotic than they had planned. 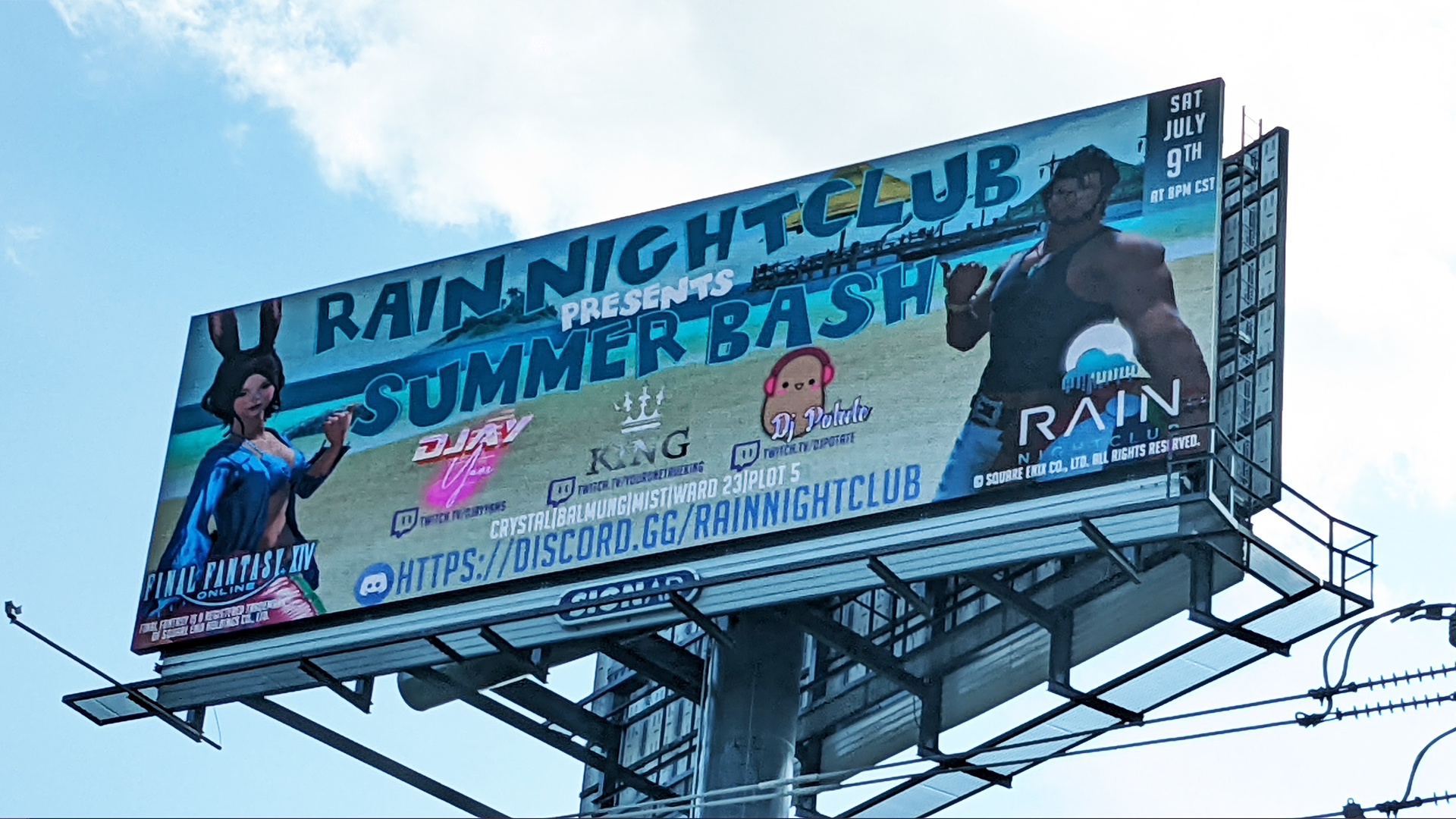