As for connectivity, well, the single DisplayPort 1.4 socket is the only way to get that 165Hz refresh going. The three HDMI ports are only 2.0 spec. You need HDMI 2.1 to drive a display with this many pixels at high refresh rates. A four-port USB hub rounds out the connectivity. In other words, you don’t get USB Type-C. Philips does actually offer a very similar panel with USB Type-C ports if that’s important to you, the 499P9H. But that’s a 60Hz panel. So take your pick. High refresh or USB Type-C. You can’t have both.

Anyway, fire the Philips Brilliance 498P9Z up and it’s immediately obvious how punchy it is. This may not be a true HDR display. But the combination of that 550 nit backlight power with the excellent contrast of a VA panel really sizzles. A ray-traced graphics fest like Cyberpunk 2077 is truly spectacular on a panel of this scale with this much zing.

That said, it’s not obvious that the 498P9Z actually looks any better running games like Cyberpunk in HDR rather than SDR mode. What we can say confidently is that SDR content looks like trash in HDR mode. So, you’ll need to toggle HDR mode as and when rather than leave it on all the time. That’s a bit tiresome, albeit a common fault among monitors with low-end HDR support.

In a broader gaming context, the crazy 32:9 aspect has pros and cons. For immersion, it’s stellar. Having pretty much all your peripheral vision filled makes a real difference. But the extreme aspect can also be problematic. Most competitive online games, like say Fortnite, cap your field of view to prevent uawide panels from providing an unfair advantage. The result is suboptimal: a very obviously stretched image.

Your mileage will vary with other game genres. Much depends on how flexible a given game is with the location and configuration of persistent on-screen features like menus and status bars, along with the aforementioned FoV issues.

So, you don’t get that razor-sharp image quality, that photorealistic detail, that’s characteristic of smaller 4K screens. Arguably, that’s even more of an issue on the Windows desktop, where the low pixel density isn’t exactly the stuff of crispy fonts and icons, even if the huge panel does make for some serious multitasking clout.

You also don’t get the sheer speed of the best IPS monitors. For sure, the 165Hz refresh means that the 498P9Z feels slick and responsive (provided you have a very fast GPU to drive all seven million pixels at over 100fps). But the actual pixel response is only decent rather than excellent.

All told, the Philips Brilliance 498P9Z doesn’t get a lot wrong. It has some inherent limitations that stem from its size, resolution, aspect ratio, and panel type. But then it also benefits directly from all those elements.

At its best, the 498P9Z is undoubtedly spectacular. But it’s not alone in this part of the market. At £999 in the UK (for now, US pricing isn’t available), it has plenty of competition including the very similar and very slightly cheaper AOC AGON AG493UCX2. Samsung’s first-gen G9 can also now be had for around £300 more and offers better response, even more punch and that extreme wrap-around curve. These kinds of screens are all a lot of money. But then they’re all an awful lot of monitor, too. 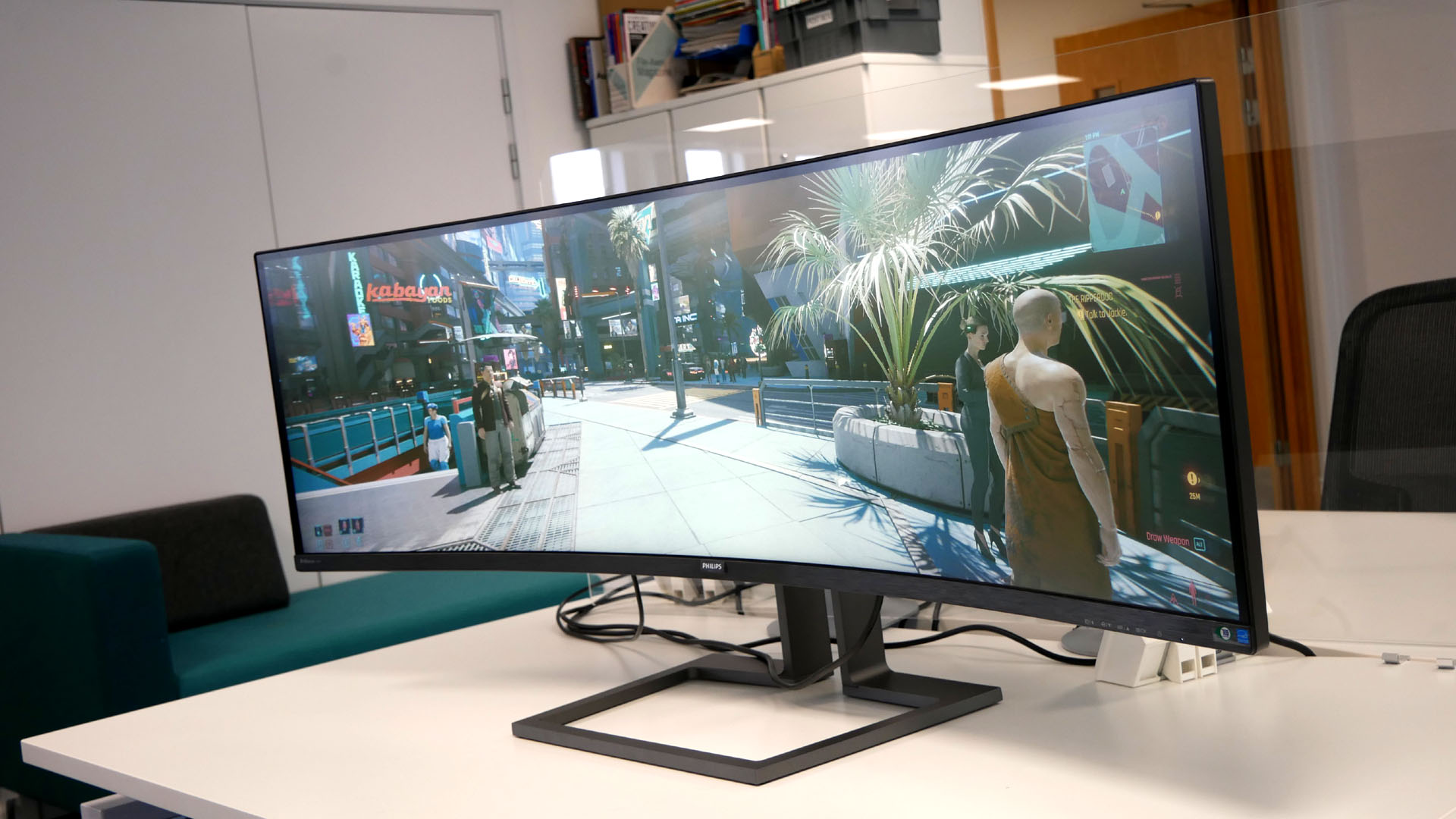