Resident Evil 6. Traditionally, the series relied on lively leafy herbs to restore you. These conveniently potted plants still exist in 6, but you can’t take them in their natural organic state. Instead, you break them down into blisters of perfectly round green pills, which you put in a case so that you can quickly pop them mid-battle. You're no longer interacting with something organic and mysterious, but sterile—an overly processed and market-researched product far removed from its original form.

That's what Resident Evil 6 was to me in 2012—a bloated product connected to the subtle horror and smart design of its roots in name only. For what it represented, I had no interest in playing it back then. But with Resident Evil 7, Village and everything in between, it now feels like the series' action era is far enough in the past that I could finally face up to it without the seething indignation that it ruined my favourite series: I was ready to green-pill, and face its vapid void of action-pseudo-horror.

But I knew I'd have to come prepared. I'd need to cover my critical eye with my monocle of ironic appreciation, laughing and scoffing in response to mechanics and utterly unpredictable quick-time events that would otherwise enrage me. I'd need to stop questioning the difference between cutscene, quick-time event and gameplay, accepting its strange flow and the fact that at any moment a zombie or helicopter blade or plane might burst in from the edge of the screen and insta-kill me. 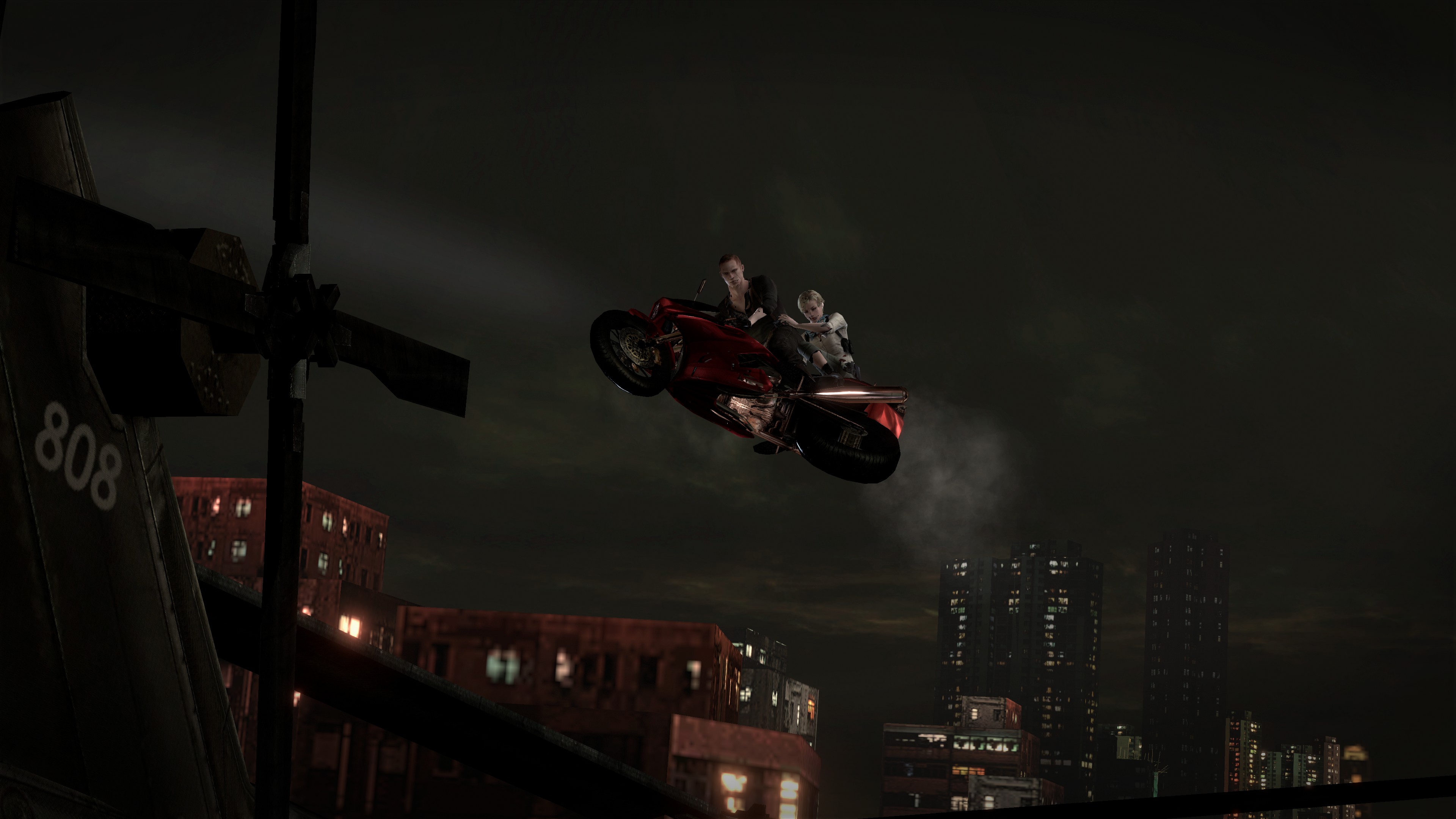 And most importantly, I'd need to replace the allegedly awful AI partner accompanying you throughout the entire game with a real-life partner—an outlet for the outrage when an ambulance screeches out of nowhere to crush me against the wall, or when squeaky-clean Leon fraternises with low-key sexist Jake in comparing unkillable stalking monsters with ex-girlfriends. BOOOO! Shame on you Leon *throws popcorn at TV*.

With these preparations, and with its sentence for debasing the series now served, Resident Evil 6 turns into one of the most enjoyable co-op games I’ve played in recent memory.

It's spectacularly silly, eschewing almost all scares for cathartic head-splattery and context-sensitive finishing moves. Crushing zombie skulls against desks and walls, or power-lifting and chucking them around as Chris never got old in the couple of dozen hours I spent with it. 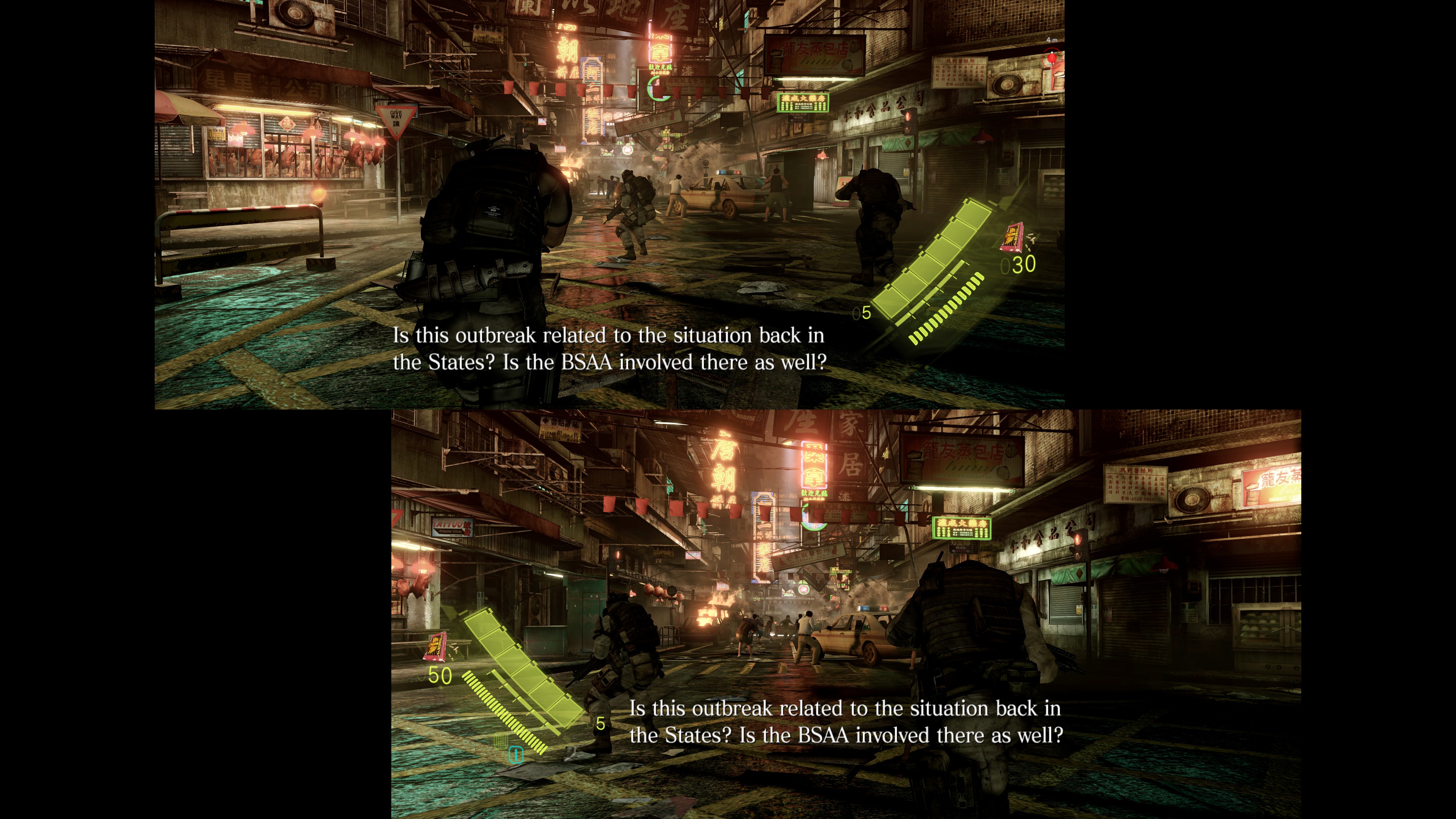 Zombies can now sprout what one of the heroes calls—in a grim tone suggesting it’s the most horrifying thing imaginable—'grasshopper legs'. One mission sees you saving hapless businessmen, who look oddly serene as they’re carried around on the backs of zombie-spiders. There's even a sequence where a giant mutant shark chases you through a sewer, bastardising the series' own implicit rule that sewers are freshwater locations and therefore home to giant mutant alligators.

The chaos feels intentional, but you'll question this when it spills over into dodgy design. Punch a tank in its rear, and you die immediately, while invisible walls surrounding all ledges will randomly give way to suddenly create a life-death QTE event where you’re hanging off a cliff edge. Resident Evil 6 also pioneered the 'corpse stumble'—never to be used again—whereby you inexplicably trip over every corpse you run over despite characters otherwise exhibiting the aerobic ability of trapeze artists. The game is so afraid of losing your attention that it squeezes drama into every possible moment.

At one point, I pulled a snowmobile up next to my partner for her to hop on, but instead bumped into her, causing her to slide for about 15 seconds down a slope. It turns out that you can't have two people on a snowmobile, so I sped around the sprawling snow-covered map while she followed on foot, no doubt questioning why she let herself get roped into this project in the first place. 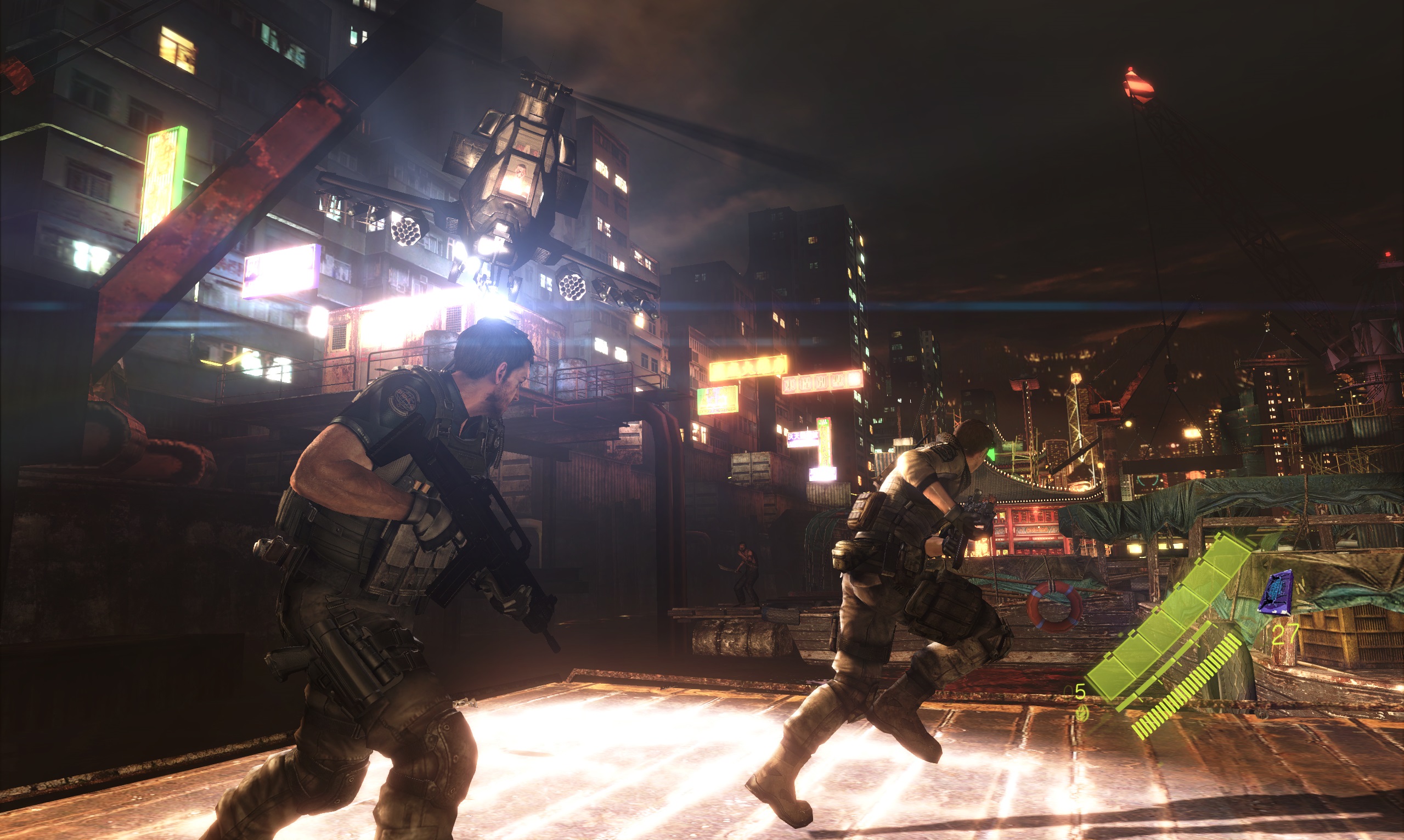 All this idiocy works much better in tandem, and I can see how those paying full-price in 2012 to play solo wouldn’t see the funny side in their AI partner sliding off into the abyss. There are a thousand moments in Resident Evil 6 where you need someone to turn to with a raised eyebrow or bemused "What the fuck?!" and laugh.

Resident Evil 6 has gone down in the annals of gaming history as a hollow procession of quick-time events, but it's more volatile than that. During one scene, you’re walking through a subway tunnel and timing your QTEs to avoid oncoming trains, a couple of scenes later an ambulance comes out of nowhere and smashes you against the wall—which for some reason wasn’t deemed QTE-worthy. This inconsistency created some absurd spectacles where I’d stand perfectly still bracing myself for a QTE prompt as, say, a building-high monster throws a bus at my head, only to get instantly killed—like a deluded cult leader standing on a runway believing that his divine aura would protect him from a landing plane.

Not everyone was onboard with the game's four separate campaigns and forced co-op at launch, but it's an effective way of addressing a narrative problem that’s plagued the unloved hero of recent outings, Ethan Winters. Resident Evil has never had incredible writing or deep protagonists with complex inner worlds, desires and hang-ups, and following Ethan around on his solitary journeys only exacerbates this lack of character.

Resident Evil heroes have historically thrived through their simple caring interactions with each other—Barry's bumbling concern for Jill, Leon and Claire's sibling vibes, Leon and Ada's whole thing. In Resident Evil 6, by pairing up each character, building up their relationships in simple ways, we’re left with quaint little snippets of character-building that don’t outstay their welcome.

This applies more to the stronger Leon-Helena and Jake-Shelly campaigns, which lean on light romantic undertones and the joy of figuring out whether there's simmering sexual tension or if the writing is just awkward. Helena, for instance, after seeing footage of Ada Wong, asks Leon about "That woman, or whatever." Later, as Leon uses a ring Ada gave him to solve a puzzle, Helena again seems to show the inquisitiveness of a quietly concerned partner about a particularly passionate and mysterious ex. You can read into its demure dialogue as salaciously as you like.

Much of the game's charms stem from its accidental comedy, but there’s some genuine merit to its co-op campaign. At a time when games like Call of Duty, Borderlands, Minecraft, even Resident Evil 5 were shunning split-screen on PC, Resident Evil 6 was one of the first games to go there and start chipping away at the stigma of PC being something of a loner's platform. And even though the recent success of It Takes Two shows that there’s plenty of love for a good split-screen adventure, Resident Evil 6 still remains one of disappointingly few full-blooded campaigns you can play split-screen on PC.

It introduced interesting drop-in drop-out multiplayer elements too. When the campaigns overlap, the game searches for other players to fill the role of the remaining heroes, while Agent Hunt lets you invade other players’ games as a monster. Even over these past couple of weeks, I’ve had to fend off some mystery invaders, and managed to successfully sabotage another player’s game by pouncing Leon as a Licker. It's all pretty forward-thinking stuff.

Resident Evil 6 is a bombastic abomination—a caricature of the worst blockbuster tropes of its era that also happens to be a vast and rip-roaring co-op adventure. By not taking its revered franchise seriously and demanding that you grab a friend to get the most out of it, I can see why it divided gamers back in 2012. Performance issues at the time didn’t help its case, but on my mid-range setup today it runs seamlessly in split-screen at 60fps on a 4K TV, letting me bask in its mindless fireworks and some impressive environments, like the neon-soaked streets of metropolitan China.

In its own weird way, this most immature of games has matured quite nicely over the years—you just need to leave your good taste behind and stoop to its level (with a friend). 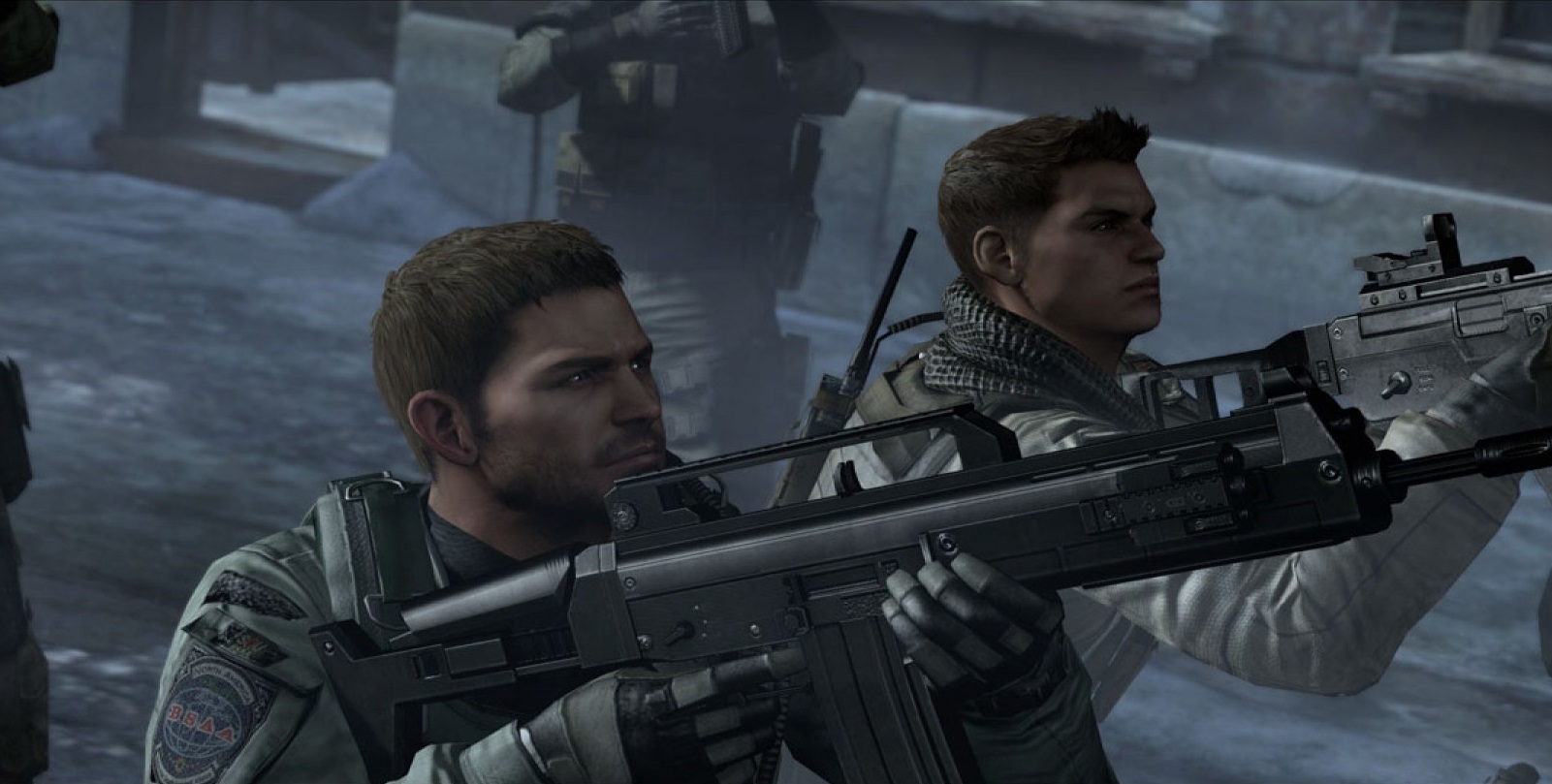