Clumsy title aside, Sniper Ghost Warrior Contracts 2 wastes no time getting to the good stuff. After a briefing that explains your motivations and a quickfire tutorial mission that instructs you on the fundamentals of sniping, you're prowling the desert of Kuamar, sneaking your way to the first overlook position. Time to first stealth kill? Maybe 15 minutes. Time to first sniper kill? Also 15 minutes, depending on your approach. Within half an hour you're perched on a clifftop scoping out a container port over a kilometre away. You'll never visit this port physically but your presence will be felt there, mainly in the cranial region.

Having gradually refined Ghost Warrior over five games, developer CI Games clearly understands the experience it's after, and Contracts 2 delivers it with a quiet confidence. You're Raven, a crack-shot killer-for-hire dispatched to the Middle Eastern state of Kuamar to prevent a war. Your target is Bibi Rashida, Kuamar's de-facto head of state after the president, her husband, was assassinated by a neighbouring country. Rashida's planned military response threatens to destabilise the region, inflating oil prices and crippling Western economies. Your job is to undermine the regime by taking out Rashida's cronies, which includes rogue hackers and disgraced SAS soldiers, before eliminating Rashida herself.

Your effort to dismantle Rashida's regime is spread across five missions. This may not sound like much, but Contracts 2's missions are enormous. So big, in fact, they're referred to in-game as "Regions," which is a fair appraisal. Each Region is a vast expanse of meticulously crafted terrain that includes multiple objectives and various paths between them. Some locations you visit, such as a giant medieval castle that has both an inner and outer fort, would form the entire level in any other game.

Contracts 2's missions are divided into two categories. "Classic" contracts are familiar infiation tasks, where you use a combination of sniping and stealth to physically sneak into locations to assassinate targets and sabotage equipment. But newly introduced to Contracts 2 are "Long Shot" contracts. These involve slipping through guard patrols to reach designated Overlook positions, lofty perches from which you snipe at targets over a kilometre away. They aren't simply a case of finding the target, popping their braincase, and moving on: Each long shot objective is an elaborate sniping puzzle where you use your sharpshooting skills to manipulate both enemies and the environment.

An early example involves assassinating a target at a solar farm, but the target is hiding inside the farm's main building. To draw him out, I had to first disable the farm by shooting the control boxes that enable it to harvest electricity. Most of the boxes have multiple guards lurking nearby, which meant I also had to take them out to stop them raising the alarm when the bullets struck the control boxes. Every shot I took was fraught with tension, as bullets take a good five seconds to travel that distance, and I was never 100% certain whether a shot would hit its target, or how knocking over that particular domino might cause the rest to fall.

The puzzle-like structure of these missions elevates Contracts 2 beyond a simple head-popping simulator. The design is clearly inspired by IO's recent Hitman trilogy. Like Hitman, these contracts are built with replayability in mind. Each mission has its own set of challenges: killing targets in different ways, getting ten kills over a certain distance, killing ten counter-snipers with melee sneak attacks.

Succeeding in a challenge nets you additional income to spend on new weapons, weapon mods, and gadgets. The latter includes a reconnaissance drone and an automated sniping-turret designed to enable synchronised kill-shots. I found the drone was only intermittently useful, as many locations where it feels natural to deploy it are protected by invulnerable radio scramblers that render the drone inoperable. The automated turret, however, is extremely cool.

Using it is almost like playing a cooperative game with yourself. You place it in a separate location so you can sync up shots on guards you otherwise can't see. But I also liked deploying it as a backup while sneaking into a facility, giving me a quick way to deal with guards I suspected might cause trouble while infiating.

While the long shot missions are Contract 2's most significant new feature, the game's best mission is actually a classic contract. Named Mount Kuamar, it sees you on the trail of Rashida's hacker pal Lars Hellstrom, who has built himself a supercomputer housed within a heavily fortified concrete bunker known as the Citadel. First, you must disrupt the Citadel's exterior communication network, which includes a huge satellite array and a water pumping station (presumably for coolant), all connected by a massive network of underground tunnels. The mission culminates with a descent into the Citadel itself, slipping through layers of automated turrets before entering Hellstrom's inner sanctum.

It's proper James Bond stuff, a joy from start to finish.

Contracts 2's blend of classic and long shot missions helps fix a problem Ghost Warrior has struggled with for a while. Sniping in and of itself can get repetitive quickly, but physically infiating bases is the opposite of how a sniper operates. By combining Splinter Cell-like stealth missions with long-range shooting puzzles, Ghost Warrior can have its cake and eat it.

This works because the challenges involved in each mission type feel very different, requiring you to adjust your tactics and equipment accordingly. Long-range sniper rifles, for example, cannot be silenced, so it's wise to use other weapons and equipment to deal with guard patrols. You can't just sneak your way through, either, as any guards close to an overlook point will converge on your position the moment you take your first shot. On the other hand, light sniper rifles used in classic contracts can be silenced, lending greater flexibility about when you snipe. But you're also physically in the mix with enemies, meaning that staring down a scope leaves you vulnerable to being attacked from the flanks.

Contracts 2 delivers both experiences capably. The sniping feels authentic and can be adjusted to be as easy or difficult as you like. And more generally, Contracts 2 just looks and feels great. Movement and combat are weighty and purposeful, while a huge amount of attention has been given to animation, environment design, and weapon handling.

The excellent presentation extends to the writing and voice acting. Contracts 2 isn't an exercise in jingoistic self-aggrandisement like Call of Duty has become. It takes a cold and darkly satirical view of contract killing and military intervention in the Middle East. The game is completely open about how your job is to keep oil prices high and Western economies afloat, an objective that leads to an amusing twist later in the game. On the lighter side, Contracts 2 also has some wonderful guard banter. They talk about their pets, complain about being henpecked by their wives, and wonder aloud whether they're characters in a videogame.

There are a few idiosyncrasies lingering from past Ghost Warrior games, particularly within the save system and enemy AI. Contracts 2 has an autosave system that disables itself when you're either in combat or close to an enemy. It's an unnecessarily convoluted system that could be easily avoided by simply letting players quicksave. And the AI really needs a secondary state between "passive" and "every guard in the area knowing exactly where you are." Stealth games are always more fun when they give you a chance to correct a mistake, to stop a guard sounding the alarm or calling in an alert. Having entire bases light up when you miss a single shot is frustrating rather than fun.

These issues aside, I'm impressed by Contracts 2. I like its Ronseal approach to executing its design, that it doesn't get distracted by tacking on a multiplayer mode or adding a loot system. The maps are fantastic, the sniping is great, the long-shot contracts are smartly conceived and fun to tinker with. A perfectly enjoyable stealth sandbox. 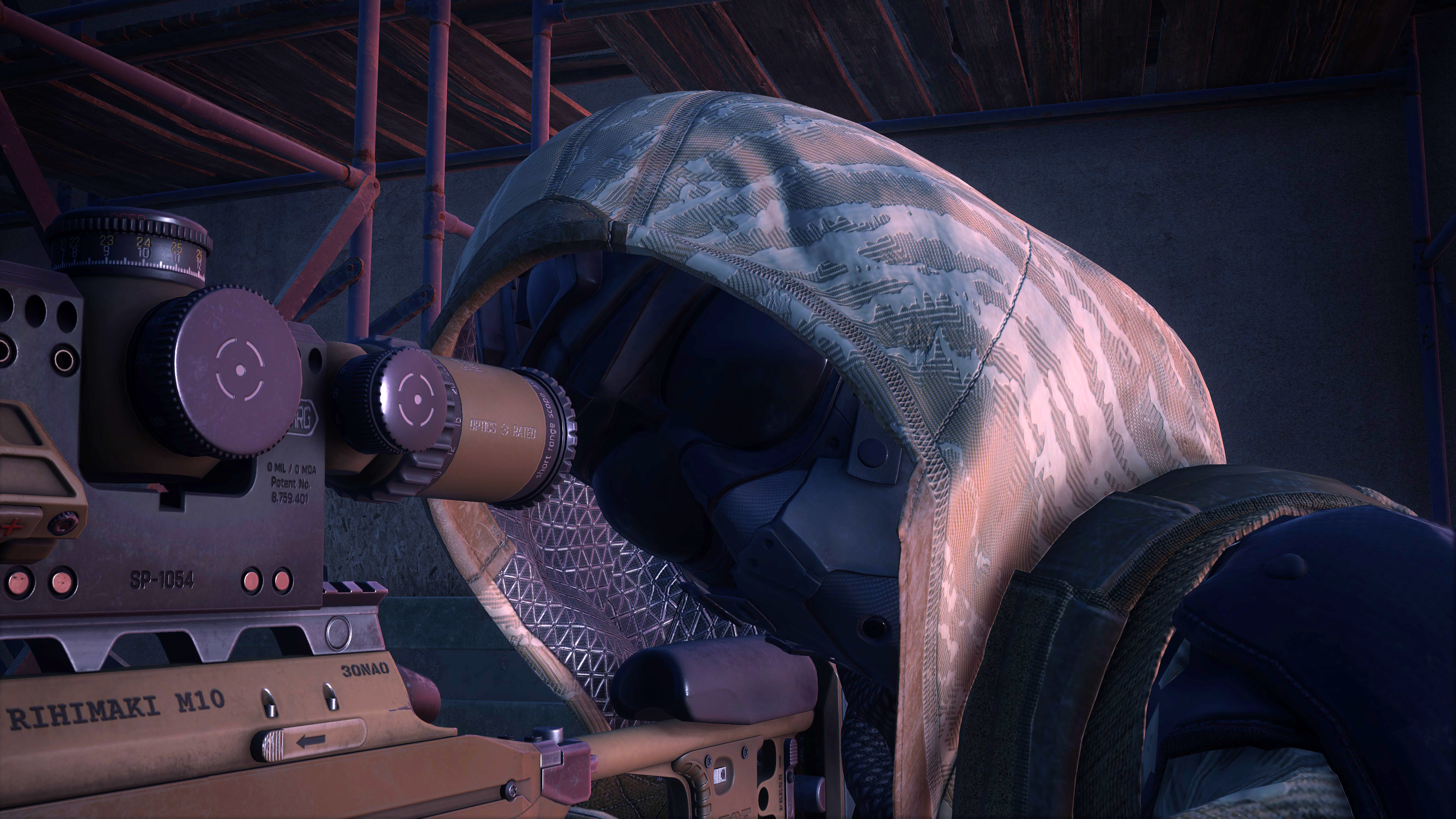