The original Devil May Cry is one of the stranger developments in games. It started life as a Resident Evil title, but morphed into a pseudo-fighting-game complete with combos and flashy aerial attacks—and yet it kept the horror setting and fixed camera angles. Recent entries take place in fully three-dimensional worlds, and have downplayed the horror element—but what if they hadn't? Scrappy DMC-like Soulstice is here to answer that question.

Where Devil May Cry has become more OTT and comedic over the years, Soulstice is dark, dour and drenched in a grim, medieval atmosphere. In terms of aesthetic (though certainly not world design) it resembles a less cheery Dark Souls, without even the fleeting glimpse of an onion knight, or an incandescent sun to offer moments of warmth and beauty. What's left is a ruinous settlement—the towering city of Ilden—filled with transformed citizens and monsters from the void. Playing as Briar the Ashen Knight, and her spectral sister Lute, you have to enter the city and close the breach to save the world.

Soulstice's story lives in an awkward place, sprinkling moments of melodrama atop a thin, simple plot that never stretches beyond the city, or a handful of actors. We're asked to care about the sisters, but both are drawn from uninteresting archetypes—the driven, po-faced warrior and the innocent little sister—and neither display elements of personality beyond that. The game is peppered with little exchanges that should in theory tell us something about them, but they're rarely more than banal remarks—”I wish the killing could come to an end”—and, worse, they're repeated endlessly as you progress.

Chapters are bookended by cutscenes that serve to move the characters to new locations, but do very little to flesh them out in the process—likewise for the world and its history. There's being sparing with exposition and character development, and there's being plain lacking. You have to give us a reason to care eventually.

Instead, story takes a back seat to action and atmosphere in this apocalyptic, grimdark fantasy setting. It's a thickly ladled mood created by an overbearing soundscape that only lets up during the fast-paced battles, and a desaturated colour palette that makes it difficult to read the world at a glance. I had to squint at my screen multiple times to work out the layout of a scene, to see the edge of a platform before I fell off the end of it. Upping the brightness helps a bit, but there's still not enough variation in the colour scheme—it's mainly shades of black and blue and green—for the environments to be legible immediately.

As in Devil May Cry, stages in Soulstice bounce between two phases. There's the exploration phase, where Briar traverses linear environments (with the occasional power-up or stash of currency stashed in a dead-end path), and there are the chunky breakout battles, as creatures leap out of portals to have a go at you. Magical barriers create closed combat arenas, and when you've dispatched every enemy you're graded on your performance: how long you took, the combos you pulled off, how much damage you suffered, etc.

While the animation is a bit stiff, and the enemies not nearly as extravagant as in DMC or Bayonetta, combat in Soulstice is enjoyable, with rewarding feedback to the weapon thwacks and monsters that explode in glitter bombs of meat and currency. There's less emphasis on long-range combat (it's quite a while before you get a bow), and a great deal placed on your ghost companion, who can interrupt enemy attacks at the touch of a button.

As you're whacking and dodging as Briar, juggling creatures and trying to remember combos, often a button prompt will appear over enemies. Get the timing right and Lute will intervene, repelling an arrow or swatting a weapon back or freezing an enemy in place, depending on the context. It's a wee bit Arkham Asylum, letting you take on multiple enemies simultaneously without having to worry about being attacked from all sides.

The timings are generous, but combat remains challenging, as Lute is unable to fend off everything at once. Battles grow in scale and complexity, introducing monsters that are invulnerable until you activate the appropriate energy field, knights with armour that has to be punched off first, and wraiths that possess creatures—and threaten to revive them. As such, it can be difficult to keep up with all of Lute's button prompts, and to remember that a frozen enemy will eventually thaw out. Button-mashing is just about doable, with the aid of consumable (and limited) health items that you can purchase or find secreted in the world, but at no point can you fully switch off during battle.

Just when you've got the hang of energy fields—switching on the red so you can hurt red-tinged monsters, and the blue so you can pummel ghosts—suddenly you have to contend with mines as well. These flare up when you turn the red on, and explode if you leave it on too long. At times, combat in Soulstice just asks too much.

Still, it feels good to survive a draining battle and see a Platinum badge appear at the end—OK, a Gold; fine, a Silver; yes, a Bronze. This lousy result grew more common for me as the systems piled up in Soulstice, from the super-powered Unity moves to the temporarily devastating Rapture State. These advanced powers practically become essential later in the game, but it does a poor job of teaching them. The tutorial pop-ups lack detail, and the skill trees are full of confusing upgrades.

For the longest time I had no earthly idea how to pull off Unity moves. Turns out they're actually finishers. You first have to build up the Unity meter (by mixing Briar and Lute's attacks, without getting hit), before executing certain special moves—the finishers will then follow on. But it's not clear at all, and I only figured it out by poring over the help menu and Lute's (four) skill trees. As those are bafflingly rife with options, I'm grateful for Briar's veritable shrub of a tree, which is just a list of weapon combos and improvements. Sometimes less is more, you know? Bosh—I've just unlocked a new move for the whip.

Outside of battle, this is a far simpler game. You follow the winding paths through the dim and colourless city, sometimes ducking down alleys to smash up crystals for currency, or to pick up the occasional upgrade nugget. Lute's multi-purpose energy fields also allow Briar to bypass traps, destroy crystal gates and jump on ghostly platforms – none of which works as well as you'd hope. It's primarily the fault of the camera, which is a throwback to the early days of Devil May Cry. When not in combat, there are fixed camera angles that really do frame the city in gorgeous ways but make it difficult to, ah, actually play the game.

Take the platforming, for example. There's a lot of platforming in Soulstice, and never at consistent camera angles. Scenes are framed for style rather than utility much of the time, making it hard to judge the distance of adjacent platforms. I typically use the character's shadow as a guide when 3D games insist on platforming sections, but Soulstice's world is so gloomy that isn't really an option. This shaky sense of depth perception is a persistent issue, not just in the platforming, but sometimes during battle, or when you're smashing up crystals in mid-air. Am I beside them or not? It can be so hard to tell. Miss and you have to clamber back up for another go.

Thankfully, battles (usually) grant you full control of the camera, zooming in and letting you swivel the damn thing around at your leisure. These moments of freedom are a balm—but then you win, unfortunately, and are clumsily thrown back to the primary, floating perspective.

I found this switching always disorientating, always frustrating, as if I was being forced to admire all the work that has gone into the environment. Sure, sometimes it's beautiful, as sunlight filters over a smouldering skyline, but I'd rather have a consistent viewpoint that lets me progress without having to constantly find my bearings.

The world rings false nearly everywhere you go, with explorable spaces that don't line up with what you're seeing in front of you. You're forever butting up against invisible walls—oh, you can't go down that alley, or jump on that roof, or that platform, and only certain (glowing) crates can be destroyed. There's an art to hiding invisible walls, but they're in plain view in Soulstice, and it robs the game of any sense of immersion.

More than anything, what Soulstice feels like is a forgotten Xbox 360 action game: a relic from the halcyon days of AA-gaming. Games like Dark Sector and Dead to Rights: Retribution—games that brought some fresh ideas and were decidedly alright at the time, but are maybe less so over a decade down the line. Soulstice similarly has some good ideas—Lute does much to disturb the sacred formula of DMC-style games—but is similarly rough around the edges, with a yoyo-ing camera that constantly undermines the game. For me, the monotonous setting and level design ultimately drained my enthusiasm, but if you can look past its issues, this is a solid Devil May Cry-like, featuring chunky and challenging combat, and there aren't enough of those to go around. 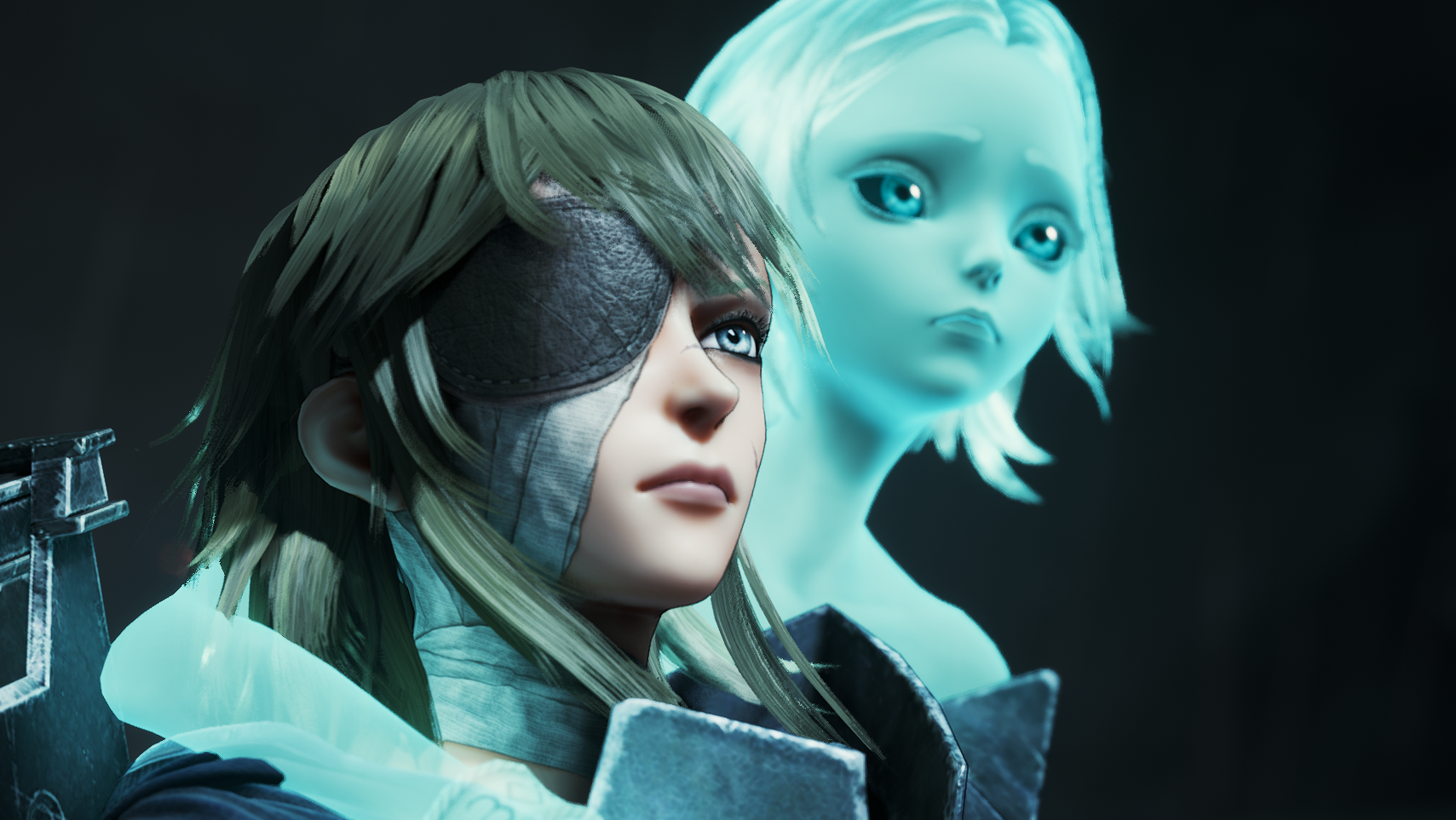