PC Gamer magazine issue 360. We do one every month, taking on new challenges and approaching our favourite games from entirely new angles—and letting you know how we got on.

A wise man once said “Make love, not war”. That man would probably have died in a week in Crusader Kings III’s world, but that is not to say he didn’t have a point. All this scheming, fighting, and murder… where is the compassion for one’s fellow man?I want to spread some love through the world of Crusader Kings, and I’m going to do it by creating the horniest dynasty in all of Christendom. I plan to take the game’s reputation as a dynamic bastard simulator literally, and attempt to conquer the world with the fruit of my loins, pushing the game’s relationship systems to their limits.Before I start, first I need a ruler and a place for them to rule. I set the game to begin in the fateful year 1066, opting to play as the King of Scotland. This gives me a prestigious enough position so there’s plenty to do, but I’m still small fry compared to states like Byzantium or the Holy Roman Empire. Rather than use the default ruler for that period in Scotland’s history, I instead create my own, specifically a strapping 27 year old with a beard you could lose a cat in. I set his sexuality to bisexual, as it increases his romance opportunities, then add the ‘lustful’ trait to his personality. I pick two further personality traits out of a hat, ending up with ‘cynical’ and ‘wrathful’.

As for more general traits, I select three that will best aid his romantic aspirations, namely Seducer, Schemer, and Legendary Reveller. This results in a high Intrigue Stat, so to balance things out I give him poor Diplomacy and Stewardship, average Learning, and good Martial. Basically, he’s Game of Thrones’ Robert Baratheon, but with the circumspect mind of Varys the Spider.All I need now is a name. First name has to be Randy. It has to be. As for Randy’s surname, I let CKIII’s name generator take care of that. After cycling through a bunch of highly Scottish surnames – Abernathy, Arbuthnot, etc, it suggests Cockburn. King Randy Cockburn. You can almost smell the nominative determinism.King Randy Cockburn begins his reign single and childless. While I reckon he’d personally be fine with that scenario, the game’s rules are not. If Randy dies without an heir, it’s game over. Therefore, my first goal is to find a wife and make some babies. After scrolling through a list of potential suitors, I select Infanta Ximena Gartziez of House Navarra. According to her character page, she’s a glutton and a sadist. But she’s also 21 and hornier than a Triceratops. Come to me, my lusty evil monster wife.

With matrimonial duties arranged, my other task is to select a Lifestyle for Randy. This is made easy thanks to his absurdly high Intrigue stat, for which there are three ‘focus’ trees. One of these focuses is Temptation, which commits your ruler to a life of “seduction, desire, and the gentle art of twisting people around your little finger”. Sold to the drooling ginger man on the throne!Basic admin done, it’s time to plan the broader objectives for Randy’s reign. There are two goals I’d like to achieve before he dies. First, I’d like to conquer the rest of Scotland, which is currently shared between myself, Norway, and a throng of Scots and Irish nobles. Second, I want to produce as many children as I possibly can. For the sake of my dynasty, of course.

No sooner has Randy saddled up his breeches, however, when he’s confronted by two immediate problems. The first is that Scotland is on the brink of civil war, thanks to a local noble forming a faction dedicated to removing Randy from the throne. My first thought is to start a scheme to seduce Duke Mael-Snechtai, but he’s heterosexual. So I hatch a scheme to murder him instead. After bribing some of his courtiers to join the scheme, they arrange for him to be attacked by bandits while on the road. The moment he’s dead, the faction disbands.

Not exactly the loving start to my reign that I wanted, but sometimes needs must. Speaking of needs, my other problem is that Queen Ximena doesn’t seem especially pregnant, so Randy is forced to begin a scheme to seduce his own wife. He could also romance her, which would make her his soulmate. But I’m not interested in soulmates. I’m interested in children, and the process through which children are created.Seducing your own wife is not exactly the behaviour of a legendary Lothario, and it appears King Randy knows this. No sooner has he embarked on the scheme, he wonders whether it’s time to go through his neglected portrait collection to find himself a new lover (basically the medieval equivalent of scrolling through Tinder). I say what better time could there possibly be?Randy can choose three potential suitors from his collection before making a final decision. The first portrait is from Countess Esclarmonda, the wife of the Count of Auvergne. She’s sent Randy a full-on nude, causing him to swipe right faster than a southpaw boxer. The next couple are both attractive ladies, but are described as having personalities blacker than space, so he declines those. But the fourth portrait makes Randy’s heart skip a beat.It’s the King of Sweden.

Clad in a chainmail vest and a rounded helmet with a neatly manicured blond beard, King Erik II is the epitome of Nordic strength and beauty. Randy goes through the motions of picking a third finalist, but his decision has already been made. Not only does a dalliance with a fellow monarch fire Randy’s imagination, having a king in his bed could also be useful from a political perspective. He scribes a sensuous letter to Erik, and quickly receives a response. “Your radiant eyes are what gives meaning to my life,” Erik writes lustfully.

Randy and Erik officially become lovers, but as kings in separate countries, it’ll be a while before they can express their love physically. But for now there are plenty of boring, non-sex-related things to keep Randy’s hands occupied, such as declaring war on the Isle of Man. This tiny, 30-kilometre strip of land between Britain and Ireland is barely worth fighting over. But it’s also the only claim Randy can realistically press at the moment, and by gum he’s going to press it.While conquering the island of three-legged men and no-tailed cats, Randy receives some good news. Queen Ximena is pregnant. He’s only halfway through his bizarre seduction scheme too. Not that he plans to stop. That wouldn’t be his style.

True to form, it isn’t long before someone else catches Randy’s roving eye. In this case, it’s his chancellor, Duke Gospatric. Gospatric piques Randy’s interest after a deft bit of diplomacy frees the king to declare war on the Isle of Man a second time (despite having already conquered it). Some time later, a tedious feast is brought to life by Gospatric’s sparkling reading of Niebelungenlied, which as everyone knows is guaranteed to get the juices flowing.

The relationships intensifies quickly from there. Gospatric starts following Randy around like a lost puppy, and it’s a matter of days before they take to the bedchamber. As Randy himself puts it, “No sound has ever inspired such lust in me as the words he now whispers in my ear. There is no hesitation. No delay. No time for gentleness. There is only my desire.” Crikey.You might think that a wife, a king, and a chancellor might be enough to satisfy Randy’s carnal cravings. And you would be wrong. No sooner has he clambered out of bed with Gospatric, Randy spies a female courtier named Malmure who shares his lustful personality. It doesn’t take much to sway her – a rousing performance of The Song of Roland is enough to convince her.

While hopping between the beds of Gospatric and Malmure, Randy somehow fi nds time to press a claim on the province of Argyll. At the same time, however, Duke Morcar of Westmoreland snatches Cumberland from the RANDY’S STATS southern border, but Randy can’t do much about it because he’s tied up in Argyll (possibly literally if Gospatric is with him).Randy is distracted from his many affairs by the death of his archbishop. It isn’t the deceased Stigand himself who’s the problem – the man was a creaking irrelevance. It’s the new bishop, Beorhthem, who inexplicably accuses Randy of incest. It’s about the only sin Randy hasn’t committed. Randy easily blows off Beorhthelm’s nonsense. And no, not in that way.Spurious accusations dealt with, Randy is free to enjoy the fruits of his labours. And Ximenas. She gives birth to a daughter, named Rodina, followed by a son a year later, named after his father. Slightly less welcome is the news that Malmure has given birth to a bastard. Randy considers claiming the boy as his own, but he’s unsure what the ramifications will be, so he decides to keep it secret.

Like the bellies of Ximena and Malmure, Randy’s realm continues to expand. Successful wars are fought against the houses of Carrick and Galloway, meaning the only parts of Scotland Randy doesn’t control are the Hebrides, the southwest coast, and the northernmost tip. Oh, and Dunbar, which Duke Morcar nibbles off as he did with Cumberland. This is the last claim Morcar can press, however, so Randy reluctantly concedes. Randy returns from his victories to fi nd more children waiting for him. Ximena has given birth to a daughter, who, thanks to a slip of the keyboard, I accidentally name ‘Helen’. Meanwhile, Malmure is pregnant again, assuring Randy it is his. While still not claiming his illegitimate offspring, Randy at least fi nds Malmure a husband to take care of her. He doesn’t stop shagging her, though, impregnating her a third time behind her poor husband’s back.

On the other side of the coin, Gospatric, who apparently lost an eye during Randy’s most recent conflicts (at least, I hope that’s how he lost it), introduces Randy to a ‘friend’ named Talore, a barkeep who is apparently capable of pulling kings as well as pints. It’s all getting a bit confusing, frankly. Even Randy wonders how much longer he can keep all these affairs up, and the game subtly hints that I drop one of my lovers. “Romance is not about quantity, but quality!” Randy declares, before continuing with all his flings.

On the subject of quality, it’s around this time that King Erik of Sweden rolls into town. After years of exchanging love letters and erotic carvings (colloquially known as stick pics), the two kings can fi nally spend a night of passion together. Randy clears his schedule and eagerly leaps into bed with Erik. Then he immediately leaps back out, horrifi ed to discover that rugged, handsome King Erik is riddled with the pox. Randy cuts off the affair immediately, while Erik slinks back to Sweden with his rotten tail between his legs.Shaken by his brush with venereal disease, Randy turns his attention to his realm. He has a claim to press on the inner Hebrides, but the current lord of the domain, Petty King Gudrød Haraldsen, is married to the daughter of the King of Norway, resulting in a powerful alliance. Randy doesn’t have the military strength to take on Norway. The alliance would be broken, however, if Gudrød’s marriage had cause to be annulled…Read part two here… 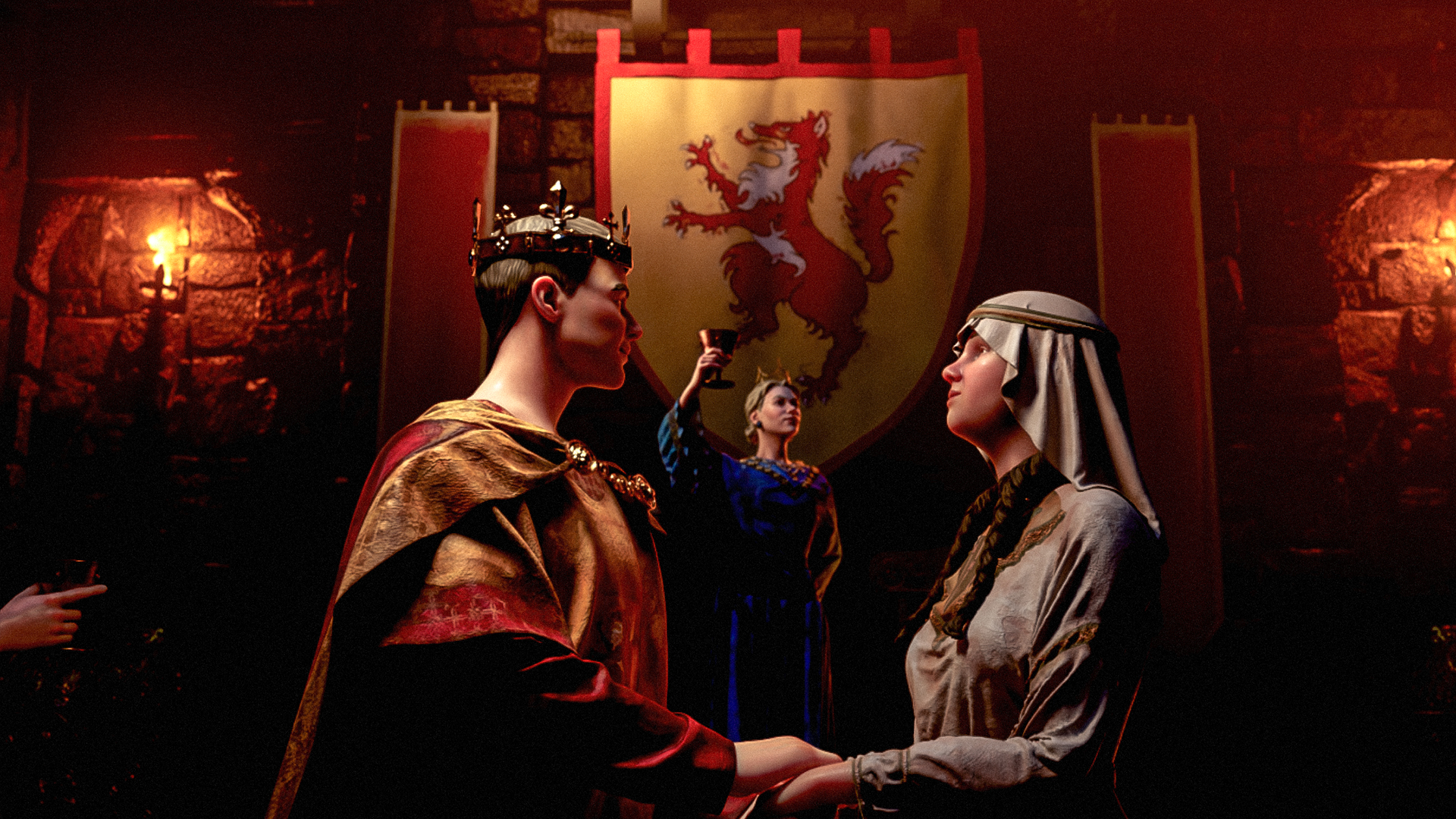