In 2018, developer Two Point Studios brought silliness back into simulation with Two Point Hospital. In the spirit of Bullfrog classics like Theme Park and Theme Hospital, they infused the game with an irreverent cartoon quality that means that you were playing with a smile on your face even as everything was falling apart and people were relieving themselves in your corridors (Rule No. 1 of Two Point games: you can never have enough toilets).

Two Point Campus takes that formula to University (or College, depending which side of the Atlantic you're looking at it from). As you'd expect, throw a bunch of students and absurd classes into the Two Point mix, and you end up with a management game that's the right kind of ridiculous. There are over a dozen courses to choose from across multiple colleges, and we played around with some of the most eye-catching ones on offer.

If a student has culinary ambitions that go beyond stir-in pasta sauces and beans on toast, then they should try their hand at Gastronomy, where they can concoct bubbling plunge pools of stew, flip giant burgers, and create pizzas adorned with head-sized pepperoni slices. Once your students are far enough along in their studies, get them to compete in Two Point County cook-offs, where they can prove themselves a true Gastrono-Master on the big stage. Of course, this will ultimately serve you, as all these successes contribute to the reputation of your illustrious institution.

For students who prefer cauldrons over cooking pots, there's the Wizardry course, but there's more to the study of magic than bubbling cauldrons. You'll need to create a Spells Room too, where students test their wand-waving skills against each other in one-on-one duels. Be warned that students may come away from this with pumpkin heads, so have a Medical Room nearby to set them right.

Some students are more gifted in the ways of athletics and cheese-grating than they are in academic pursuits, which is why the noble sport of Cheeseball exists. Find a patch of grass big enough, plonk down a Cheeseball pitch, then watch as your team trains up, and eventually competes in the County Cheeseball Championships.

Watching this sport up close is quite something, as students chuck cheese wheels like frisbees towards a goal guarded by students with a giant grater. It really lets you appreciate the fine animation work the devs have put into Two Point Campus, and showcases the special quality that's made these games such a breath of fresh air in a management genre that can sometimes take itself far too seriously.

At Knight School, students will learn codes of chivalry, hone their sword skills, and master the Mediaeval Martial Art of jousting (with the caveat that instead of using actual horses, they simply sprint at their opponent with a horse costume around their waist). Again, it's classic quirky Two Point.

Even the more 'sensible' degrees—the kind that parents would push their children into – have that cheeky twist. If you have an influx of 'Posh' students who wish to sell their souls in exchange for a lifetime of ill-gained wealth, then take their parents' money, build a Computer Lab and get them on the Money Wangling course. Pop down a Science Lab, meanwhile, and students can create strange cubes of glowing matter in Scientography, or learn to understand the nature of humour by studying a little Funny Business.

Two Point Campus may look like all fun and games on the surface, and it's a joy on the eyes to watch these classes in motion, but don't get carried away. There's a deceptively deep management game lurking just below the surface, and—like a diligent College Administrator—it won't suffer laziness lightly. 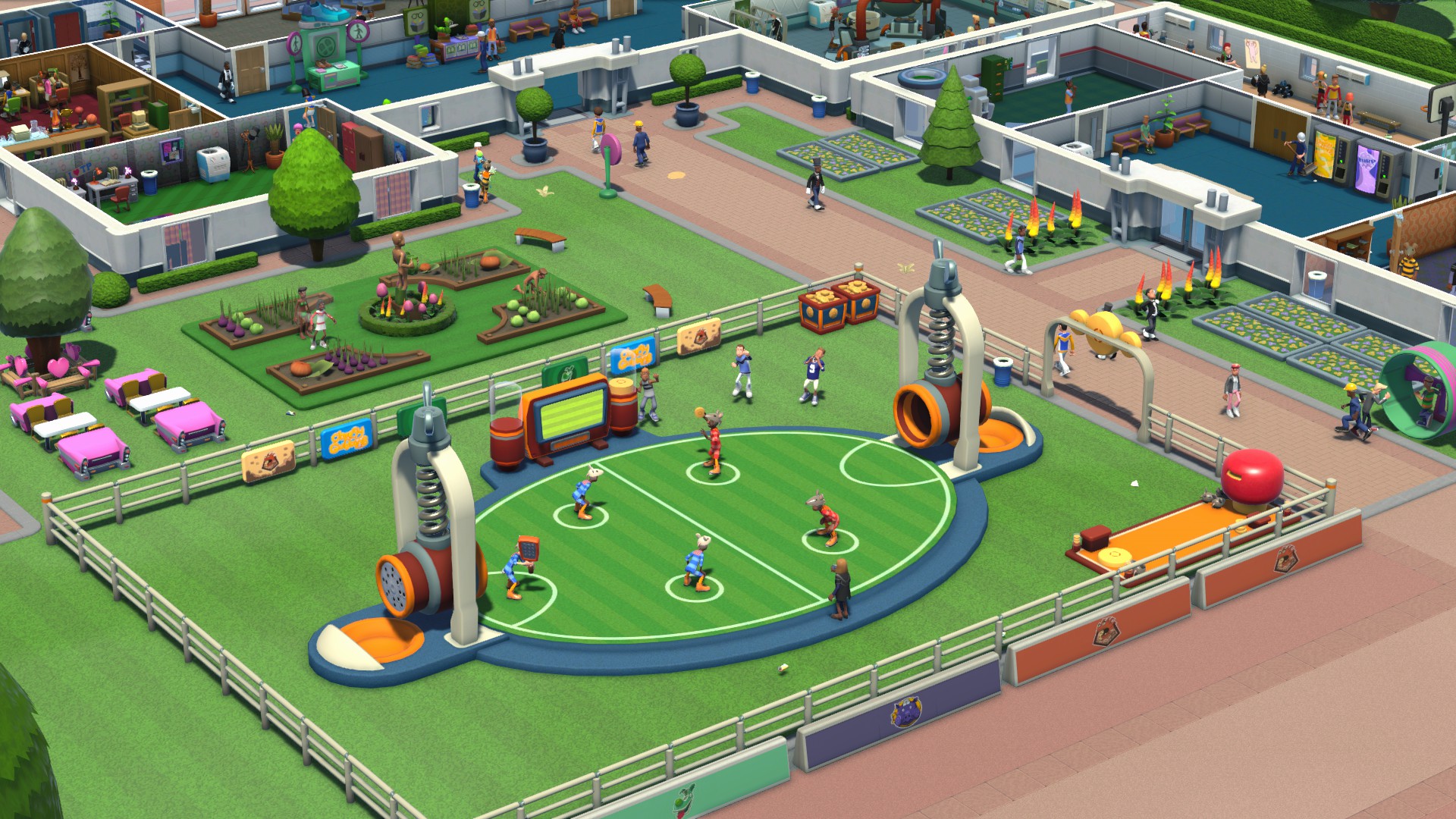 Janet Jackson's Rhythm Nation is a form of cyberattack