Home › PC › The hyper-intelligent precursor races which somehow still ballsed up the whole galaxy: Ranked An Isu from the Assassin's Creed series.

Perilaus and the brazen bull, only with incompetent space insects.

Humans, but taller. They also had a sixth sense, called 'knowledge', but you can’t see 'that so I don’t know why I’m mentioning it.

The Isu created humanity to serve their purposes: Homo sapiens as a docile workforce and Homo neanderthalensis for warfare and expedition. To maintain control over humans, they created technological devices that manipulated neurotransmitters in the human brain—powerful artifacts that would later become known as the Pieces of Eden. Dress it up however you like, the core plan was 'let's make a big old bunch of slaves.'

Eventually, hybrid humans were born without the neurotransmitters required to keep them under Isu control—most notably Adam and Eve. In a classic angry teenager move, the nudist power couple led a human rebellion against their godlike creators, engaging them in a war that lasted a decade. And because everyone was so busy fighting, they didn’t notice a coronal mass ejection from the Sun which caused a global cataclysm. Following that, the Isu population rapidly declined to the point of near extinction, leaving behind the Pieces of Eden so humanity could secretly fight over them like disgruntled relatives at a will reading.

Like so many precursor races, the answer to this is 'humans, but flatter.' Because nothing says 'ancient intelligence damned by hubris' more than a face that looks like hastily saran-wrapped lunchmeat.

The Forerunners inherited something called the Mantle of Responsibility, essentially making them the custodians of all life in the galaxy. They built the Halo arrays and The Ark, and saw themselves as the guardians of everything that exists. You'll notice I said 'inherited'. In Halo lore there’s a pre-precursor race—lazily called the Precursors—who were wiped out by the Forerunners before turning into a dust that may or may not have caused the Flood. Apparently, the 'protecting all life' thing doesn’t extend to the clowns who created them.

See above. In wiping out their own creators, the Forerunners spawned The Flood—a lethal, interstellar parasite that threatened to consume all sentient life in the galaxy. And if that's not bad enough, the Forerunners' solution to the whole shambles was to activate the Halo arrays and kill almost everyone, leaving The Flood with nothing to eat. Worse still, the now-extinct Forerunners decided to pass the Mantle of Responsibility to humankind, which, as a human, I can assure you is a terrible idea. It's like making a greedy dog Custodian of Plump Sausages. We'll fight each other over a pandemic that's already trying to kill us. We cannot be trusted to police our own gardens, much less the galaxy.

Finally! A precursor race that doesn't look like us. The big-budget Reapers are a cross between a fuck-off squid and a Dubai skyscraper.

To the Reapers, all sentient life is just a vegetable allotment waiting to be plucked. When a species becomes technologically advanced enough to develop faster-than-light travel, they discover the Mass Relays—ancient technological devices, built by the Reapers, which allow ships to instantly traverse huge chunks of the galaxy.

This eventually leads them to the Citadel, a vast space station that inevitably becomes the central hub of the galaxy. Eventually, when life in the galaxy is advanced enough, the Reapers sweep in via the Citadel—which is actually a gateway to their dark space home—harvest everyone, and remove all trace they were ever there. This is exactly what happens to the Protheans, the humans-but-also-insects race that occupied the Citadel before the current cycle, and the Inusannon before them, and so on. Which, to be fair, serves all the sentient races right for half-assing the investigation into where all this cool shit came from.

The cycle of destruction has been going on for millennia, so the Reapers' plan has been working rather well. But gradually, over the course of millions of years, the sentient races were secretly creating a superweapon called the Crucible. Nobody had time to finish it before being eradicated by the Reapers, but work has progressed over the cycles, like intergenerational dads slowly building that treehouse they promised you. By the time Commander Shepard rocks up, the Crucible is in a state where it can be finished and used to finally break the cycle. Note to any precursor races reading this: always check under the bed/Serpent Nebula for pornography and/or planetary superweapons.

The xel'naga want to create the perfect life form. They've seeded and cultivated thousands of species in their time, and this desire to establish new life is motivated by their inability to reproduce. Instead, they perpetuate their existence by cultivating and uplifting two other races, one possessing purity of form and the other purity of essence. When they're ready, the two races meet like an evolutionary version of First Dates, and create the next xel'Naga. How romantic.

The xel'naga decided to uplift the Zerg, binding them to a central consciousness called Overmind and imbuing it with the desire to achieve genetic perfection. At the same time, a rogue group of xel'naga took umbrage at the cycle of creation and tried to purge the universe of their work. In doing so, their leader, Amon, turned the zerg against the xel'naga, wiping them out and killing himself in the process. All that was left was a galaxy teeming with voracious, hyper-evolutionary superorganisms, intent on achieving genetic perfection, now organised by a hive-mind. Great work lads.

Unclear. The closest thing we have is the Slann—which look like undead space toads or Jim Henson puppets, depending on your source material.

Unusually for precursor races, The Old Ones are sort-of good. The oldest of all known sentient races—hence the name—they were the first beings capable of interstellar travel. A benevolent species, the Old Ones intended to nurture the younger races of the galaxy and spread life and intelligence across the cosmos, creating many of the races known in the Warhammer 40,000 lore. What could go wrong?

The Old Ones got embroiled in a conflict with a race known as the Necrontyr. Necrontyr lived short, brutal lives and were jealous of the near-immortal Old Ones. The Necrontyr were crushed by their technologically-advanced enemies, forcing them to strike a bargain with ancient energy beings called the C'Tan. The C'tan tricked the Necrontyr into transferring their consciousnesses into robotic bodies, robbing them of their free will but granting them their immortality. These godlike, ageless beings—now known as the Necrons, as seen in Dawn of War—pushed the Old Ones to create genetically-engineered warrior races to fight back, including the psychically-gifted Eldar and warlike Krork. Bad idea, space toads.

Not only did this fail to prevent their extinction, but millions of years later the debauchery of the Eldar gives birth to Slaanesh, the horniest of the Chaos Gods—whoops!—and the Krork, left untended, devolved into the Orks: perhaps the most virulent threat in the Warhammer 40k universe. Current 40k lore even seems to suggest that the other Chaos Gods were created during the Old One vs Necron War in Heaven—it just took them time to mature. Basically everything terrible in the 40k universe stems from chubby benevolent frogs trying to do the right thing. I’m not sure what the lesson is, but I imagine many of us can relate. 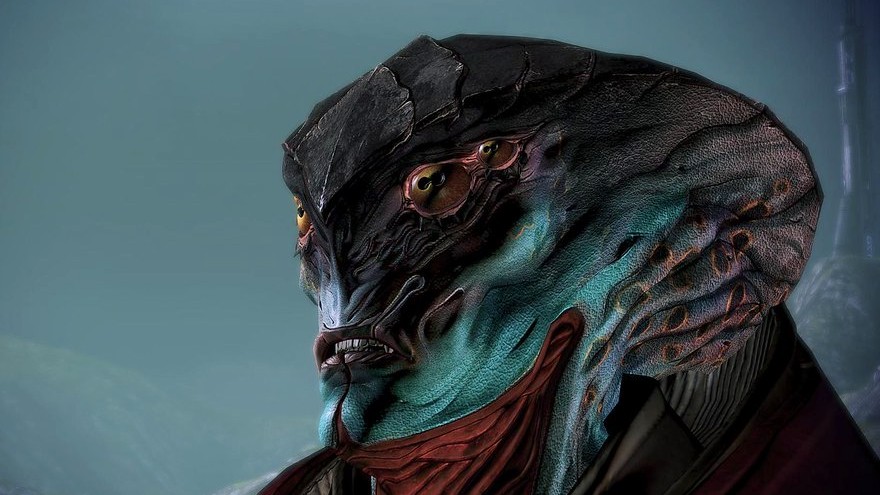