Innistrad: Crimson Vow. With previews starting today—and the MTG Arena release on November 11th preceding the full tabletop release on November 19th—the midnight hour is close at hand.The most extra of all of Magic’s vampires, Olivia Voldaren, is the star of the set, but as you might expect with this Halloween theme, there are more vampires in the set than Christopher Lee’s IMDB page. I got to take a sneak peek at some upcoming facts for the new set, and I’m happy to report that it has all the trimmings of a gothic horror classic that would please even the most jaded resident of Hanweir. Lets see what treats are already in our outstretched bags.

Where does the story go in Crimson Vow?

In the last set, Midnight Hunt, we saw the schemes of Olivia Voldaren come to fruition, sticking the plane of Innistrad in permanent darkness as part of the Eternal night. She showed up at the apex of the Harvesttide festival and stole away the Moonsilver key, leaving Sorin Markov and the Gatewatch crew behind. Not cool, Olivia.Now we see Olivia is having a massive wedding under threat of the nearly assured Eternal night, planning to join the two most powerful vampire bloodlines together. This means that the surprise groom is Edgar Markov—progenitor of the Markov bloodline and grandfather of Sorin—who went missing from his crypt during Midnight Hunt. The Gatewatch and their allies are planning to crash Olivia’s wedding to recover the Moonsilver key, and we know that Sorin, Kaya, and Chandra will have cards in Crimson Vow.I can’t imagine a more fun premise than a climactic battle to prevent endless darkness at a gothic vampire wedding.

Which mechanics are returning?

We know Disturb—which allows humans to come back as spirits—will be returning. As shown off with the previewed Dorothea, Vengeful Victim, Disturb now has the added feature of allowing Spirits to come back as enchantments. The transforming Daybound/Nightbound mechanic is back, but sticking to the werewolf creature type. While werewolves take a backseat to the wedding-attending vampires in this set, there should be a good amount to further bolster the tribe.The Exploit mechanic is also showing up from previous sets, allowing you to sacrifice creatures for additional benefits.

Alongside these returning mechanics, are two fresh mechanics and a new type of token: the Blood token. The Blood token is an artifact that lets you loot a card for a single mana, and is also used by various vampires in the set to fuel their activated abilities or transform them. Training is a triggered ability for creatures that gives you a +1/+1 counter whenever they attack with a bigger friend. While on its own, Training isn’t particularly strong, it will go well with creatures with Coven—which already requires different powers—and there may be great triggered abilities to pair with it. With Savior of Ollenbock as our example of this, he can clear the way or rebuild your board state, looking well worth the deckbuilding investment. I’m not sure how big an impact Training will have, but it feels to me like a few powerful cards may highlight the mechanic even if it doesn’t cement it past Crimson Vow.The other new mechanic is Cleave, which provides an alternate casting cost for instants and sorceries in return for changing their effects. With Dig Up, we see a mana fixing spell which turns into a full on tutor, nabbing you anything you’d like in return for a few extra mana. If nothing else, Dig Up is going to be a winner for Commander, where mana fixing and tutors are both sought after already. I’m curious to see already if Cleave will always be an increased cost, or if we’ll see the reverse as well, with spells powering down in return for their Cleave cost. My guess is that they’ll be strictly upgrades, but the flexibility could make spells with Cleave some of the best in Crimson Vow.

The Eternal night frames from Midnight Hunt are returning, including a new full art set of 10 basic lands, two arts of each type. The Eternal night showcase frame is also continuing as the frame for non-vampires, which reveals the return (and reprinting) of Thalia. There’s also an entirely new showcase frame in the Fang frame for vampires. In this frame, we’re getting the stunning alternate art on Sorin by legendary Castlevania artist Ayami Kojima. We’re also getting the rest of the cycle of dual color lands started in Midnight Hunt in borderless, and lands are always a great choice for extended art.

Separately, harkening back to the Godzilla crossover in Ikoria, there is a new crossover with Bram Stoker’s original Dracula. This set of alternate names and art for cards in the set will only be available as box toppers (as rewards for buying booster boxes) or in collectors boosters. We also know that this pattern of crossover alt name/art cards will continue in the future, when there are opportunities that match with the theme of the set. I’m relieved to see more of the accessible Godzilla-style crossovers, and excited that it may mean some really cool future ideas—including in the upcoming cyberpunk themed Kamigawa set.

Do Arena and Commander get any love in Crimson Vow?

All the spooky love you can handle is coming to Arena, with Olivia and Sorin avatars, what looks like a new bat pet, and a gothic cathedral background. Since it’ll arrive on November 11th, some might say it’s missed the spooky seasonal window, but that’s just the 12th day of Halloween as far as I’m concerned.

WOTC has also revealed two of the face cards coming to Commander, Millicent and Strefan, the former of which is a strong spirit tribal Commander for blue/white, with Strefan bringing his own flavor of Blood token generation to head up vampires. We know there will also be a new white artifact in Wedding Ring, though it won’t be in the actual Commander decks, instead appearing in Set and Collector booster packs. It’s a useful and interesting method of getting card draw in mono white, and a good way to make a temporary friend. 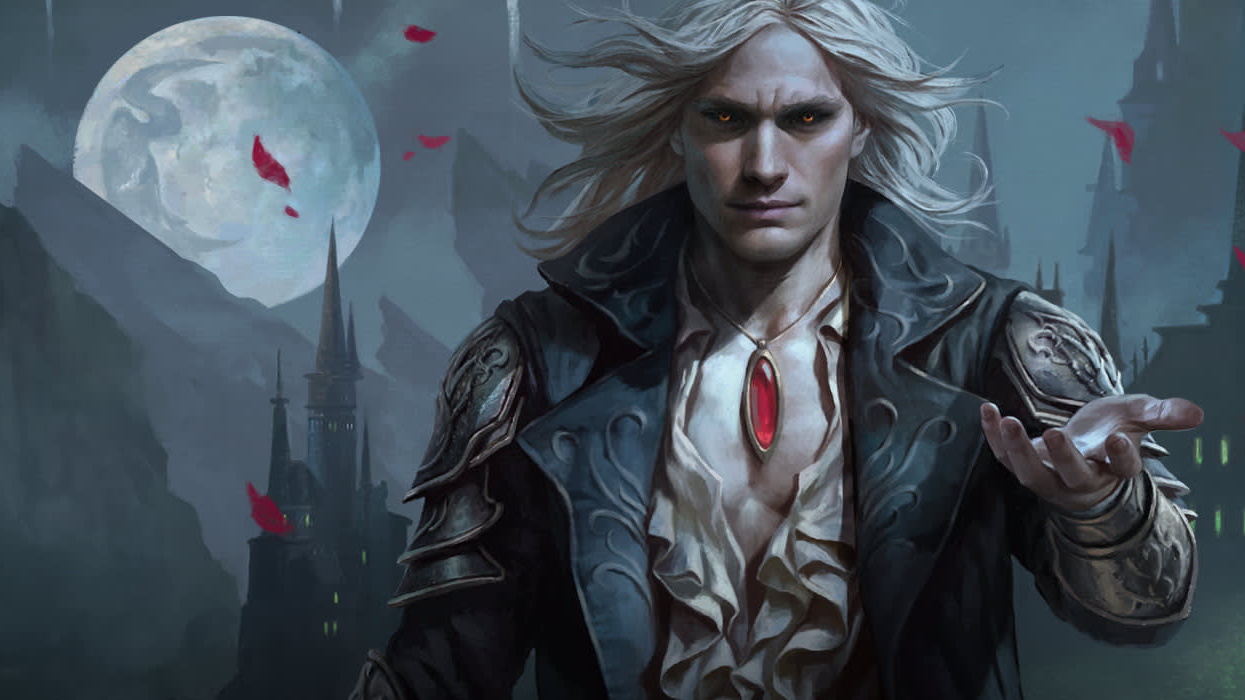