We're bringing back this 2020 feature for Star Wars Day.

The history of Star Wars videogames is as long and storied as the movies themselves. There are some great ones—Knights of the Old Republic, TIE Fighter, Dark Forces, Jedi Knight, Republic Commando. I could go on.

But for every classic there are a dozen that have been lost to time and largely forgotten about. In some cases this is entirely justified. Honestly, a lot of bad Star Wars games have been released over the years. But there are some gems hidden away in that immense back catalogue too.

This Star Wars RTS is interesting because it features systems normally associated with 4X games: namely diplomacy, espionage, and exploration. It also features hero characters from the movies and the expanded universe, meaning you can recruit the likes of Han Solo or Grand Admiral Thrawn. The real-time starship combat is awful in retrospect, but the grand strategy stuff is quite compelling—and the game is actually a pretty effective Star Wars story generator.

LucasArts offshoot Lucas Learning released a few educational games in the late '90s, including this unusual, and actually pretty imaginative, ecology simulator. Gungan leader Boss Nass wants to colonise Naboo's moon, and needs you to seed it with life. Doing so involves releasing plants and creatures into the wild to create a food chain, and ultimately a balanced ecosystem. Hardly a classic, but it's nice to see a Star Wars spin-off game that doesn't involve blasters or lightsabers.

This isn't strictly a Star Wars game, but it's close enough. Published by Lucasfilm Games, it involves a solo factory worker trying to keep a massive, elaborate machine running. But what's the Star Wars connection? Well, this particular factory is churning out Star Wars merchandise, including Darth Vader and Stormtrooper action figures. The box art also prominently features characters including R2-D2 and C-3PO, which I'm sure suckered a few Star Wars fans in.

This rather shameless Star Wars cash-in uses the base code of popular chess sim Chessmaster 3000, so it's perfectly playable. But it's still just a slow-paced, straightforward chess simulation with Star Wars characters as the pieces, and the occasional animated battle scene—which are, admittedly, quite fun to watch. I do like the opening crawl, which reveals that the weakened Empire and Rebellion are at peace, and now settle their differences playing chess.

Yoda Stories has become something of a cult favourite, so perhaps isn't as forgotten as the other games here—but it's an interesting curio nonetheless. Part of LucasArts' short-lived Desktop Adventures series, the game sees Luke Skywalker (no, not Yoda) exploring randomised maps based on classic Star Wars planets and completing, let's be honest, fairly banal fetch quests. It's fun in short bursts, and I kinda love the chibi character design, but a classic Star Wars game this ain't.

Lucas Learning's first release uses the same engine as Jedi Knight, but it's a very different experience. It involves plugging together mechanical parts to create your own droids—and with around 90 bits and pieces to choose from, you can build all manner of strange machines. Ever wanted to see an R2 unit trundling around with the head of a protocol droid? DroidWorks will let you realise that weird fantasy, then use your twisted creation to solve simple physics puzzles.

Man, LucasArts really went hard on the Naboo-themed games in the late '90s and early 2000s, huh? Set during the events of The Phantom Menace, this arcade shooter is, loosely, a sequel to the highly entertaining Rogue Squadron. In it you play as ace pilot Gavyn Sykes, shooting down Trade Federation fighters, dodging air mines, and piloting a bunch of vehicles, including the famously yellow Naboo N-1 starfighter. Not bad, but clearly a clumsily retro-fitted Nintendo 64 game.

Vehicle combat games were inexplicably popular at the turn of the millennium, and Star Wars was not immune to the craze. Demolition, which is built on the same bones as Vigilante 8, features a selection of familiar Star Wars vehicles including landspeeders, podracers, AT-STs, swoop bikes, and snowspeeders. And then, over the course of a match, they pummel each other with thermal detonators, proton torpedos, and other weapons until only one is left standing.

This was never officially released on PC, but if you really want to play it you can. It's a beat-'em-up in the Tekken mould, but with a large selection of Star Wars characters—including Luke's expanded universe wife, Mara Jade. The best thing about Masters of Teräs Käsi is forcing unlikely characters to fight each other, whether it's Han Solo going toe-to-toe with Darth Vader, or Princess Leia battering Chewbacca. It's very silly, and not even a very good fighting game, but one of the most entertaining oddities in the Star Wars catalogue. 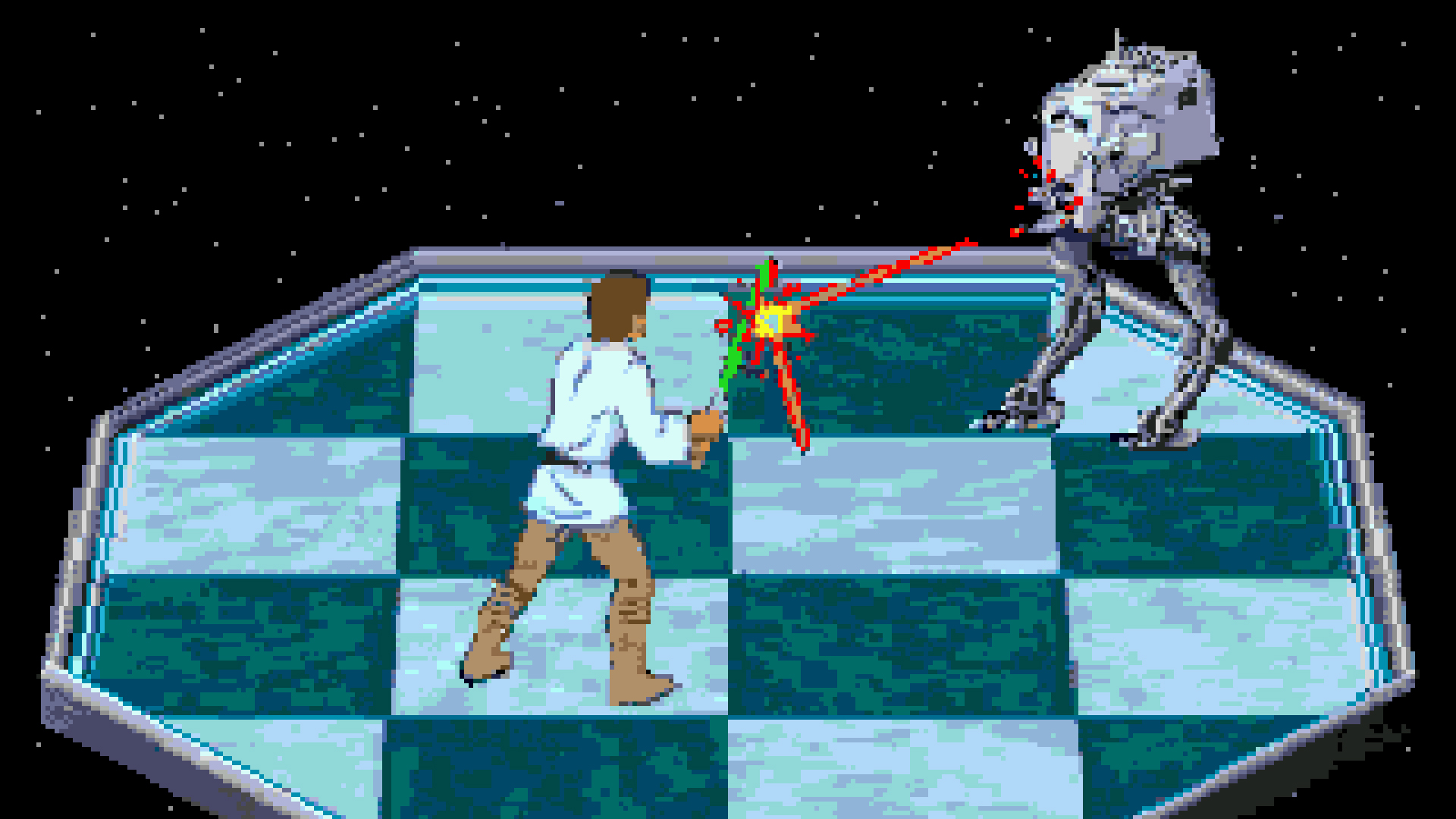