Rog and Roll (spotted by Alpha Beta Gamer) puts the spotlight where it should be: it focuses on the mooks and the minions, having you take control of Rog, an adorable little tomato man. Absent protagonists or final bosses, the cute monsters of Rog's world built an egalitarian henchmen society, one which is now threatened by the return of an evil overlord.

Developer Punch the Moon recently put out a free demo for Rog and Roll consisting of its first world, a Green Hill Zone-type deal. The platforming controls feel good—bouncy, yet precise⁠—and the level design has already impressed me. Rog and Roll's levels have a bit of a Sonic the Hedgehog thing going on, with upper and lower paths through its levels.

If you lose your way on the trickier upper path, you can still muddle through to the end of the level on that easier lower route. Ample and cleverly placed collectibles seal the deal, with three crystals and four giant coins offering replay incentive and helping the levels feel generous and expansive.

Rog and Roll is also quite a looker, with a 2.5D presentation reminiscent of Paper Mario, or if someone had tried to do a Yoshi's Island on the Gamecube. I think it's hard to do a surprising or impressive take on a grassy green starter world these days, but Rog's striking palette and the addition of some mournful lost ruins really help this one pop. The game's promotional screenshots provide a small glimpse at later worlds, including a pastel-colored futuristic city like something out of the Pokemon anime (or the N64 Smash Bros. stage it inspired).

I'm excited for Rog and Roll⁠—it manages to have a similar sort of “how you remember it” magic as Shovel Knight but for the Gamecube/Game Boy Advance generation. It also ran perfectly on my shiny new Steam Deck despite its lack of a verified tag, so you can bring Rog and co. with you on the bus or to a rooftop apartment party like a twee model in an ad. Rog and Roll does not yet have a release date, but you can wishlist it and check out the demo on Steam. 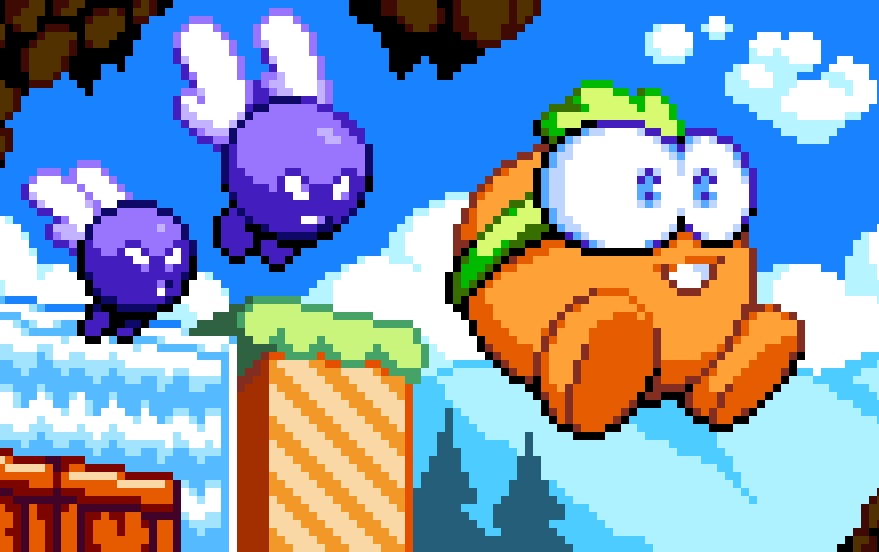