gaming desks, and even PCs within desks, we haven't really had smart desks. Which is kind of what Lumina is promising with the first programmable desk and it looks as sleek and shiny as it does largely impractical for my own personal work style.

But with an inlaid OLED panel in the desktop I can't help but want it.

It's a way off, however, as the Lumina Desk has only been announced and is still very much in the prototype stage. Final release of the ~$1,500 motorised desk is scheduled for the second half of next year, though we are told that it does already have the OLED screens working in its prototype models.

It is obviously that 24-inch OLED panel in the middle of the desktop that makes it so damned sci-fi, but it's probably not going to work in the way you might think. When I first saw the pictures I was expecting some kind of Star Trek Next Gen touchscreen console—like some tablet on motorised legs—but it's not strokeable and is only configurable from a desktop app.

Thankfully it's still resistant to fingerprints, with a 1200cd/m² peak luminance and an oleophobic coating. Though my phone still has that and is grubby as all hell.

From there, Lumina promises, you'll be able to configure it to display a “wide array of integrated apps like Google Calendar, Instagram, Zoom, Slack, Robinhood, Twitter, and many more.”

So, if you were hoping for some touch-sensitive second-screen action, where you could drop a web-page, or video while you game on your main device, you might be disappointed.

But Lumina still wants to riff on the Star Trek analogy: “The Lumina Desk goes boldly where no other desk has gone before. As the first programmable desk, and compatible with Windows and Mac, the Lumina Desk possesses its own operating system, which we call Lumina OS. We also are offering a software development kit (SDK) for developers to build on our platform.”

Lumina's also kitting the desk out with a bunch of hidden power sockets, with six USB Type-C sockets and a pair of wireless charging surfaces built into the unit, capable of delivering some 200W of charging power.

There are some more dubious features Lumina is planning on baking into its desk, however. Personally I'm not convinced that having a motorised desk that goes from sitting to standing on a schedule is that great an idea. I get the health benefits of ensuring you alter your working position throughout the day, but having my desk suddenly lurch up or drop away doesn't fill me with wonder.

Though maybe having my desk remind me to take a break might be nice. “Hey Dave, go grab a coffee. Treat yourself.”

But as much as I'm into the idea of this sleek, screen-ladened motorised desk, I do not possess the habits that such a workplace surface demands. I'm messy, and my desk is always cluttered with cables, a mic, bits of various computers, different mice, and pens. Inexplicable pens. I don't write anything down anymore, yet there are still pens. No paper. Just pens.

Any super-handy bright OLED panel telling me what my work schedule is looking like that day, or feeding me yet more ever-changing next-gen GPU specs via TweetDeck, is going to be buried beneath the detritus of my cluttered working habits. And any reminders to take a break every now and then are likely to be muffled by the discarded packaging of key switches, gaming mice, or maybe a random laptop. 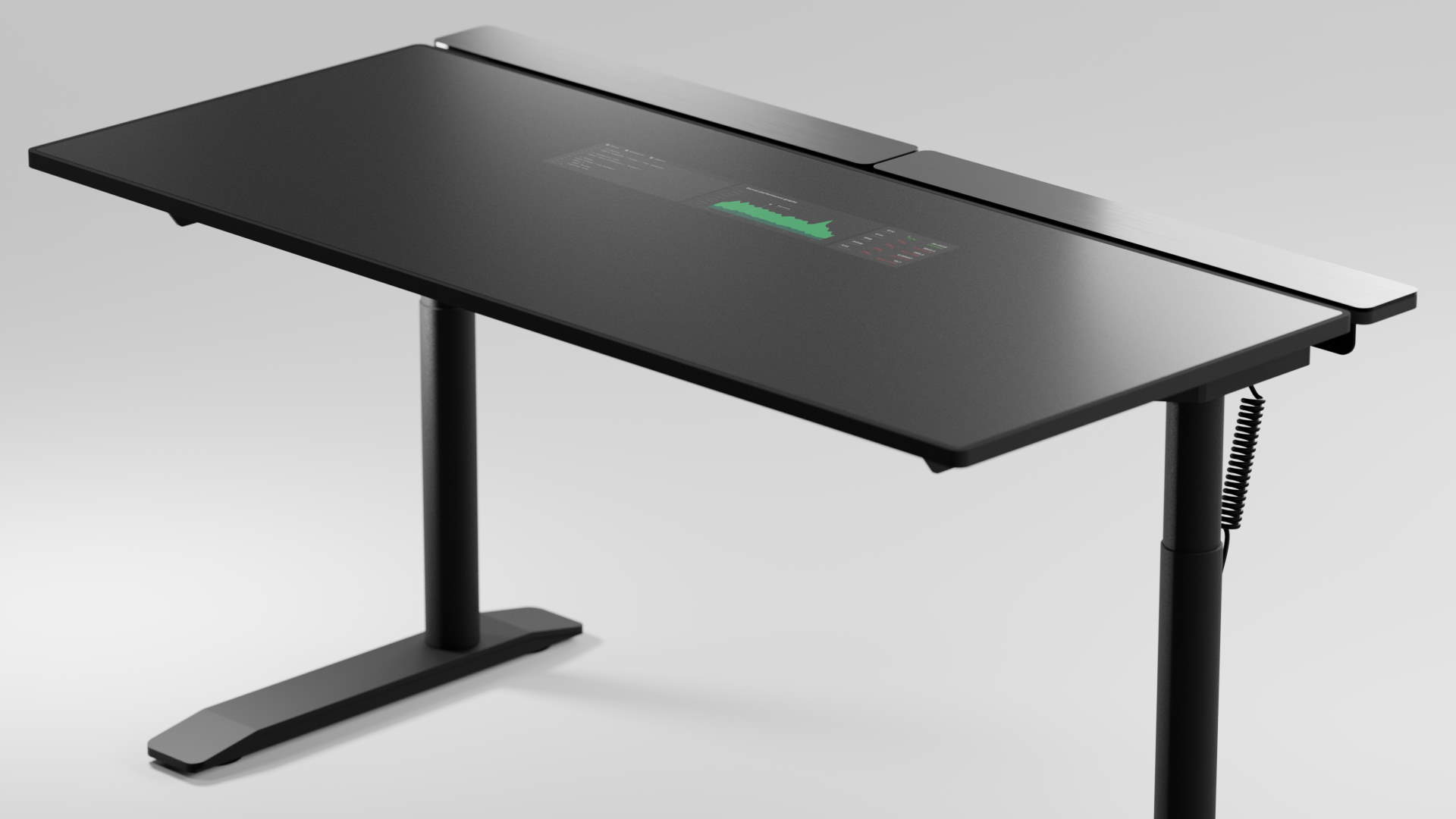