Trombone Champ became the main character on Twitter yesterday, but in a good way. After posting a video of myself playing Beethoven's Fifth Symphony, scores of people were delighted, enthusiastic, and in some cases even moved to tears (because of how horribly I played).

But Trombone Champ isn't just a fast-paced, fun, and goofy music game. There's way, way more to it than just trying to toot along to The William Tell Overture, Hava Nagila, and a trap mix of Mozart's Eine kleine Nachtmusik. There's a dramatic Dark Souls-like cutscene introdcution, lots of secrets and mysteries and unlockable trombones, a turd-based card creation system, a summonable demon, hefty doses of trombone lore, a lot of information about how many hot dogs legendary trombone players can eat in a single sitting, and more baboons than you would expect in a music game. (I would expect zero baboons in a music game. I would be way off.)

Questions? Yes. I have many. Thankfully the creator of Trombone Champ, Dan Vecchitto of developer Holy Wow Studios, agreed to answer a few of them, starting with the origins of the game.

Vecchitto, who says he does 95% of the work on the game while his wife, Jackie, assists with artwork and assets, tells me he thinks the spark came to him after building an arcade cabinet for an earlier Holy Wow game, Icarus Proudbottom’s Typing Party.

“I suddenly had the idea for an arcade cabinet with an enormous rubber (it had to be floppy rubber) trombone controller, with the player desperately trying to match a bunch of squiggly note lines headed their way,” Vecchitto says.

He later realized that moving a mouse forwards and backwards could mimic the act of moving a trombone's slide in and out, negating the need for an actual trombone-like controller. After throwing together a prototype of Trombone Champ, he decided to make it a full game. “I thought it would just take a few months to make, but whoops! It ended up taking something like 4 years,” he says.

Despite no personal tromboning experience (Vecchitto does play the saxophone and clarinet) the game has been embraced by real-life trombone players—even though after posting the announcement trailer in 2020 a few were quick to point out that the characters weren't holding the trombone correctly. (That has now been fixed.)

“I honestly expected real trombonists to hate the game, because it’s not even remotely realistic. But the reception from them has been extremely positive!” Vecchitto says. “I’m not sure if being a trombonist makes you better [at Trombone Champ], but it certainly makes you more enthusiastic about seeing a trombone in a video game.”

Though Trombone Champ is a fully-released game, Vecchitto plans to continue expanding it with improvements, language localizations (it's currently English-only), and leaderboards so players can compare their tooting prowess with their friends. He also hopes to include a way for players to import their own tracks in the future, as Beat Saber does, though at this stage he's not sure how it will work. “It’s definitely in the cards as soon as we figure it out!” he says.

There are also more songs on the way to increase Trombone Champ's current roster of 20 tracks. “I really want to add a rap song,” Vecchitto says. “I had a pretty solid idea for a track called 'trombone traphouse' although I never got around to recording it because I can’t rap and didn’t know who would volunteer to rap for a trombone track.”

Other upcoming songs will include additional anthems. The game currently features The Star Spangled Banner, Stars and Stripes Forever, God Save the King, and O Canada, but as more localizations are added there are plans to include the anthems from more countries. Other possibilities for future songs are Happy Birthday, The Mexican Hat Dance (Jarabe Tapatío) and—brace yourself—Flight of the Bumblebee. Better start building up your wrist and finger muscles for that one.

I also asked Vecchitto for his top three pure wishlist songs, if licensing fees and other legal concerns were completely off the table.

“I’m kind of an obsessive music nerd and would love to include tracks from the artists I obsess over,” he said. “Todd Rundgren’s Zen Archer, Yellow Magic Orchestra’s Le Femme Chinoise, and maybe something by Deerhoof, or Aai Shanibar from Rupa’s Disco Jazz.”

Vecchitto said he also hopes to continue working with musician and producer Max Tundra, who created a song called “Long Tail Limbo” for Trombone Champ. “If anyone is reading this, purchase his three big LPs immediately. We’re talking about a guy who got a 9+ Pitchfork score… and somehow he’s on the Trombone Champ soundtrack. Incredible.”

Eagle-eyed trombone tooters may have noticed the game has a few (dozen) references to baboons, such as the mention of legendary baboons in the game's intro, several collectible and craftable baboon cards, a shadowy chamber accessed from the main menu that contains a mysterious engraved baboon tablet, a “baboon quantity” setting, and an entire song about baboons called “Baboons!” (A sample of the lyrics: “Babooooons. Baboooooons. Ba. Ba-boons. Ba… ba-boons.”)

Surprisingly, Trombone Champ's baboon fixation originated with a feature that didn't even wind up in the finished game. While in early development, Vecchitto planned for each song to have three difficulty levels. While that idea was ultimately dropped, it still had a big impact, baboon-wise.

“I wanted to call the easy difficulty 'baby' and the hardest difficulty 'bonkers.' But I was struggling with what to call the medium difficulty,” says Vecchitto. “It had to be a word that started with 'B.' At some point I thought: what if the standard difficulty were called 'baboon,' so the difficulties were 'baby,' 'baboon,' and 'bonkers?'

“From that point, I became obsessed with inserting 'baboon' into the game as much as possible. When I eventually decided to make the storyline an odd parody of Dark Souls, I realized that having 'primordial baboons' would be perfect.”

I also asked Vecchitto a question I always end interviews with because I'm a terrible interviewer: What question did I not ask that you wish I'd asked, and what's your answer? Luckily, he was prepared for such an eventuality.

“Goku or Vegeta?” Vecchitto says. “I would definitely say Goku, but Jackie would say Vegeta. I’d also have to specify Japanese-language Goku, because Japanese Goku is completely different than English Goku. English Goku is kind of boring and sounds like a nerd; whereas Japanese Goku sounds like a goblin and is MUCH dumber; the translations always strip out jokes that make Goku seem extremely dumb.

“If we have to compare English Goku to English Vegeta?… then Vegeta probably wins out, because he has so much more energy and magnetism. Although, even there, I would say that I prefer Japanese Vegeta, who sounds a lot more intelligent and cunning, whereas the English Vegeta sounds like any bog-standard cartoon villain.”

Finally, how many hot dogs can the makers of Trombone Champ eat in a single sitting?

I'm glad we cleared that up. You can find Trombone Champ here on Steam. 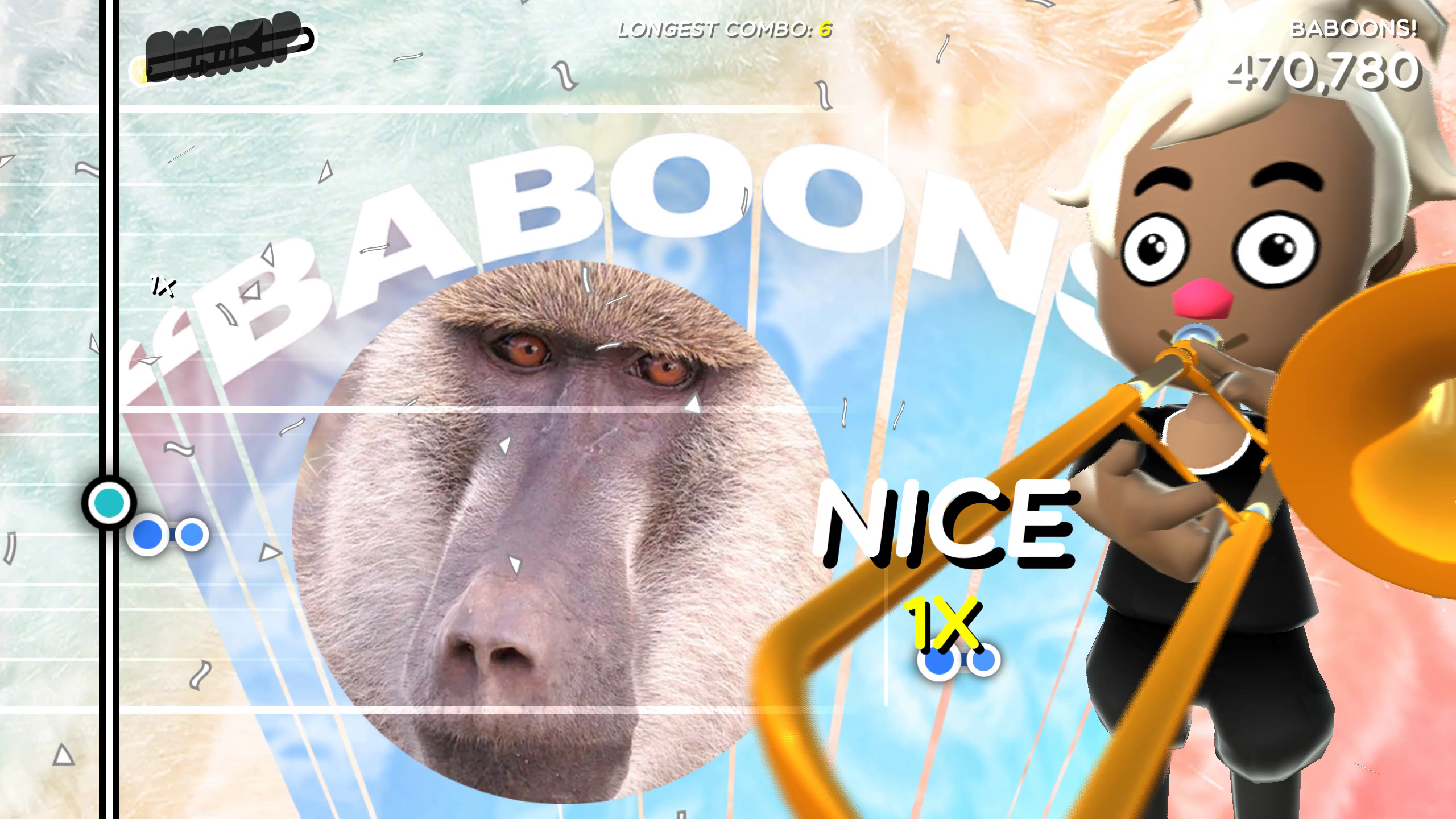