“University gives you a bright future… and clouds it with debt.” Of all the gags Two Point Campus fires off over the university PA system, this one has stuck with me the most, capturing the experience of playing this management sequel as well as enrolling in further education. I had high hopes for my students, but by the end I only cared about how much cash I could bleed from them to keep the university in the black.

Running a campus is expensive. The buildings and staff chip away at my bank balance regularly, and whenever I have a nice fat stack sitting in the vault, I know that all it's going to take to burn through it is a request for a new supercomputer. Why can't they just be happy with all the live owls I added to the dormitories? Owls are a hoot.

You can't do anything without plenty of cash, but the acquisition of wealth is not the ultimate goal of Two Point Campus. Each of the 12 missions has bespoke main objectives and then plenty of dynamic ones, but at their heart the goal is to create an efficient temple to academia that shits out happy, A+ students across a range of courses, from gastronomy to espionage.

This is a doddle, at least initially. The first few missions saw me open a science school, chef school and knight school—not a typo—none of which posed much difficulty. Compared to Two Point Hospital, which is by no means a brutal management romp, but is nonetheless purposefully chaotic and tangled, it seemed pretty sedate. But then I took over a struggling wizardry school and started to buckle under the weight of magical curses and depressed students.

It started off simple enough. The school already contained some dorms and other essential rooms, leaving me to add bathroom facilities and a few classrooms. Before long my arcane academics were bouncing from lecture to potion class to private tutorials, netting themselves a world class education in poisoning people with weird elixirs. Sure, sometimes a witch would transform a few students into pumpkin-headed weirdos or bombard the campus with tiny meteors, but the impact seemed negligible. Until it didn't.

Near the end of the first term, the curses had piled up to the point where a significant portion of my students were on the fast track to failure. And those who weren't failing were so depressed they were considering leaving. Failed students and drop-outs do not contribute tutorial fees or spend their student loans at the snack machines, and that was a problem. It wasn't until I was on the cusp of completely losing control over my campus where things just clicked and it started to feel like a proper successor to Two Point Hospital.

I took out a loan and invested in more assistants with medical skills to undo the pumpkin head curse, who also needed more facilities to carry out their important work. Then I gussied up the dorms so my students would have cosy sanctuaries where they could unwind after a hard day of spell-slinging. To minimise the time it took students to reach their classes and maximise the space, I started grabbing rooms and moving them around. And I founded a power-napping club to help low-energy students get more pep in their step. Amid the crisis, I came alive, squashing and averting disaster after disaster. I bought a lot of owls.

Generally, though, Two Point Campus gives you management wrinkles that are easier to handle. Keeping on top of schedules and queues, which was the bread and butter of a Two Point Hospital administrator, is a minor concern here. If you've let too many students get sick without treatment, you should expect some queues outside the new medical room, and if you've got a bunch of starving kids hanging around, they're all going to rush towards any vending machine you plop down; but this is nothing compared to the hospital patients spending days stuck in waiting rooms or queuing outside GP offices, potentially even dying before they get seen.

Things absolutely do get trickier if you're trying to get more stars, however. Each mission has three to earn, and three sets of challenges associated with them, but you only need a single star in each to progress. By the time you're aiming for the other stars, you might be running out of space, or trying to juggle a lot of different courses and too many staff. But completionists will also unlock more items to help create a content campus, as well as getting more opportunities to earn kudosh, a secondary currency that can be spent on unlocking new decorations and classroom tools.

Less helpful is the UI. I encountered a few situations where I had to do things like raise the attractiveness of the campus while being given inaccurate information. At one point I had a main objective to beautify the place and a random secondary objective to do the same, but the number on the trackers didn't match. And when I went into the proper menu, I got a third number. The difference was just a few percent, and this isn't the kind of management game where a lack of precision is fatal, but you do expect to trust what the game is telling you.

Where Two Point Campus gets top marks is the novelty of its challenges. Ultimately there's not much difference between educating chefs and spies because, no matter what the course, they'll still need tutors, lecture theatres and places to complete assignments like libraries and computer labs. This is quite convenient because one of the schools you'll run is a spy school masquerading as a culinary college. But each mission also comes with some unique quirks.

The spy school, for instance, is constantly being infiated by moles, who have to be rooted out and expelled. This is a simple process where you have to react to a bunch of students being befuddled—evidence of a mole in the vicinity—and then hunt down the mole by watching the group's behaviour. If anyone brings out a camera or puts their finger to their ear, then you give them the boot. If this was present in every mission it would soon outstay its welcome, but by giving each a new, eccentric wrinkle Two Point Studios keeps them from getting stale.

I dig archaeology the most because your students actually get to work in the field and uncover artefacts. With limited funding, you're encouraged to sell these artefacts, but since many of them are aesthetically pleasing, you can also use them to improve the attractiveness of your campus. The artefacts grow in value with age, however, so you might want to wait before you sell them, unless your students have uncovered an old can or some other rubbish, which nobody wants to look at.

One of the biggest obstacles in Two Point Hospital was the immutability of the buildings. You could expand by purchasing more land, but you couldn't edit the buildings themselves, only their interiors. Two Point Campus has done away with this limitation entirely, letting you edit and construct new buildings, as well as giving them some cosmetic flourishes, taking full advantage of the available space. You'll still have limited plots of land, however—even in the sandbox mode—so the spatial puzzles persist, but with fewer frustrations.

There is, of course, so much more to Two Point Campus than the conundrums it provides. A bit of pressure is imperative, but equally as important is the silliness. Radio plays, adverts and announcements are constantly blaring out of the PAs, spitting out jokes, ridiculous anecdotes and the odd bit of satire—little of it biting, but all of it good fun. And of course there are the visual gags and whimsical courses. Students cooking gargantuan pizzas, flying around on jetpacks, making massive robots—there's just so much to stare at. With the rise of survival management sims, the genre has grown a lot more demanding, so I very much appreciate being able to just enjoy some slapstick shenanigans instead of being informed that 20 people have died from malnutrition. In Two Point Campus, everyone gets out alive. Though not necessarily with a degree.

I do think that Two Point Studios missed a trick by not giving the students much individuality or personality, though. There are goths, jocks, cyborgs and wannabe superstars, but their needs are mostly generic. They want nice dorms, friends, maybe a bit of romance, and increasingly expensive equipment to help them with their assignments. These things rarely relate to who they are, however, as evidenced by the goths who ask me to plant flower beds and benches so they can enjoy the outdoors.

That's not to say there are no personality traits, but they're all things like being unhygienic or not liking homework, which simply make them worse students rather than more interesting ones. I can't remember any of them because they're all just a bunch of randos. To be fair, this might be exactly how real university administrators feel.

It ends up feeling beholden to the model of Two Point Hospital, where ultimately you are just trying to provide services. In a campus, however, there's so much more social drama to mine, which would have gone a long way to fleshing out the threadbare stories that serve as the set up for each school's challenges.

So Two Point Campus doesn't really rock the boat, fitting firmly into the mould of its predecessor—but replicating one of the best management games of recent years is a smart strategy. Genuine surprises are few, and I hope the UI flaws are fixed promptly, but this is still a guaranteed good time, bursting with energy, charisma and slapstick shenanigans. You should definitely consider enrolling. 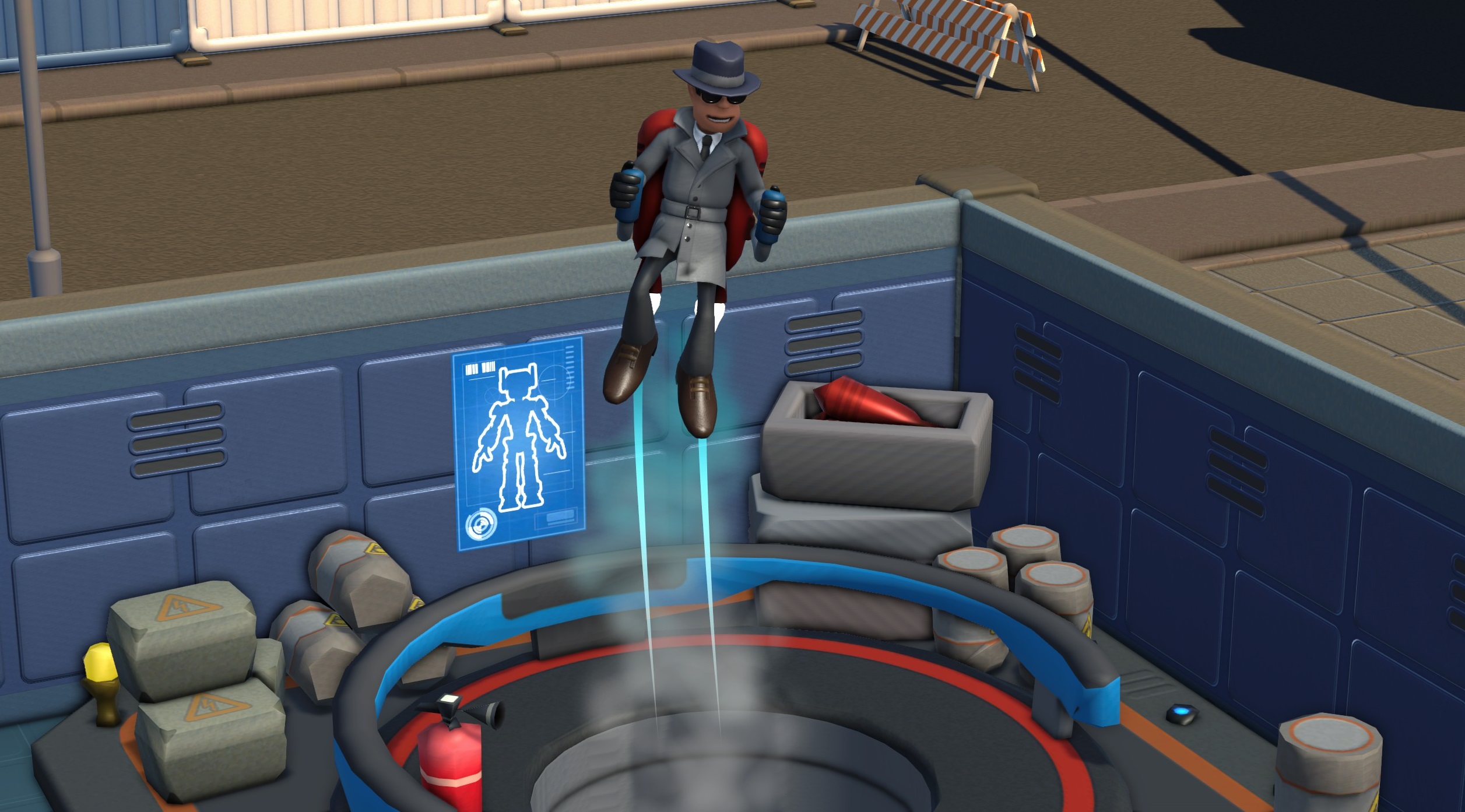