This year's TennoCon, the annual event built around Warframe, was about more than just the future of the game. The announcement of a new game, Soulframe, and Digital Extremes moving into publishing point to realms beyond. But even amid all this big news, Warframe remained the focus. As well as the long awaited unveiling of The Duviri Paradox—first teased back in 2019— there was also the surprise announcement of a new update due before the expansion, Veilbreaker. And all this will be under a new creative director, former Warframe community director Rebecca Ford.

When Ford started out 10 years ago, she could not have foreseen the bright future that lay ahead for the game and the company. She has played a vital role in shaping the special relationship Warframe has with its community, fostering stories like that of Filipino artist Lendel Fajardo, who managed to support his family with the money made from skins he created through the TennoGen program.

“I was a little 20-year-old intern and now I'm the creative director of Warframe,” she says. “I'm sitting in this new hot seat where I need to be really careful about all the good will we've built up. All the rapport, and all the long term relationship building with the community, is only as good as your next mistake.” Though Ford feels grateful that it isn't all on her shoulders. “I know that if I trip, I'm not gonna faceplant because I have an amazing team.”

Ford's move from community management to steering the Warframe ship actually started six months ago, leading April's Angels of the Zariman update—an addition that I found tantalising in all the best ways, with a sense of place and atmosphere that elevates Warframe so high. While Ford takes pride in it, she also feels responsible for shortcomings like its bugs at launch. “I should've held it another week … But there were a lot of reasons we couldn't. And then I started to understand those reasons. Every little thing matters. You're making a hundred micro decisions a day and then they add up. We can't move this update. By the end of the [launch] week we had a more stable build, but that's what stung the most.”

The near future of the game had already been touched upon before TennoCon, with the announcement of the next warframe to get the Prime treatment: Khora, alongside her pet Venari. Digital Extremes also teased a completely new warframe: a werewolf-inspired design drawn up by Joe Madureira of Darksiders fame. Though Ford was sure to insist that just doing a lycan-esque warframe wouldn't be weird enough for the game and promises they're going to do something a little different.

Another update will fill the void before Duviri arrives, the surprise announcement that is Veilbreaker. The update is split into two: On the one hand you have a single player experience in the role of Kahl-175, doing the titular veilbreaking as he leads an uprising against the forces of Narmer. On the other Veilbreaker will also bring back the deadly Archons from The New War as weekly missions tasking players with taking on one of the formidable foes in exchange for rewards towards a new progression path.

More than anything else, at the forefront of fan's minds has been The Duviri Paradox, and Digital Extremes have finally pulled back the curtain to show a substantial part of the huge open world update. After years of speculation fans are finally beginning to understand what Duviri is about. At least, some of it. The thing still looks absolutely wild.

“This is the Drifter's story,” Ford says, confirming the return of the player character's alternate reality self, first introduced in The New War. “The theme and personal story for this is one of making meaning of a life you feel you have no control over. We're really playing with the darkness … a lot of people feel like there's no point to trying because someone else is in control, someone else is responsible for removing all colour from your life and all colour from the world. And sometimes you might not realise it, but people want to help and it's on you to accept that help.”

The expansion will see players taking the Drifter (possibly some time in their past) through Duviri, a strange, near colourless realm in the void where they're trapped in an endless cycle. They can't die but they can't escape. Time loops sure are becoming popular in games, huh? Duviri is ruled over by Dominus Thrax, a king whose very mood shapes the world each day and the person keeping the Drifter there, who Ford hints may be more familiar than they seem.

“If the Drifter is the version of the Tenno who didn't get rescued, what else could be out there?”

Regardless of who they are, their kingdom is an outlandish landscape, composed of floating islands, gigantic statues and 'dragons' that resemble giant serpents made of clockwork parts. Though most of the colour has been sucked out of it, some still bleeds through. What Warframe can be and how it can look has expanded significantly over the decade but this is its boldest departure yet.

“I don't know if we could have made Duviri three years ago,” Ford says. “But because of all the tech and optimisations we do now, we get to make this weird island open world where you're gonna have all this space … portals too, so there's going to be very warframe-friendly zones.” Though, the advancements do eventually come at some cost, with legacy graphics options holding the game back and soon to be made obsolete, so it can keep moving forward. “We're not quite there yet but maybe, maybe, this year.”

Runs through Duviri are built on roguelite elements, keeping players away from their powerful warframes and starting fresh, assembling abilities on each new day—though there will be overarching progress to make you more capable. “The idea of time and resetting time and days was always very integral to Duviri,” Ford explains. “And the roguelite came about when we realised that if we're playing with time in a weird way, and players have all this arsenal, we can give them access to their builds and the systems they know in a way that lets them have a unique experience every day by choosing what will work for whatever the game asks of them in that contained, Duviri time-slice.”

To get through this ethereal landscape you have a few helpers. First and foremost is your horse, a mount that can not only carry you across land but also air, as it flies gracefully through Duviri skies. Then there's a, erm… disembodied hand? Your guess is as good as mine (is it the Lotus's hand?), but it allows you to add colour back into the world to claim checkpoints for progress and to solve puzzles hidden throughout, like one where you must open a window to your younger/alternate self to perform matching actions. It also seems to play a role in the use of Duviri's portals. Of all the wild departures Warframe has made over the years, this feels like one of the most significant. The New War paved the way for controlling other characters and, coupled with Veilbreaker, that's set to become a staple of Warframe going forward.

Everything about Duviri feels ambitious and vast, like building a whole other game inside Warframe. Narratively it feels like its reaching for the stars too, weaving a time-bending tale that will focus on the very idea of a paradox and what that will mean, with players both continuing the story from The New War while revisiting events that seem to take place before the player character, the Tenno, is even awoken.

“In the chronology, technically The Duviri Paradox happened first. But it also didn't. Because then The New War couldn't have happened. So it's a very fun paradox.”

It's not just for the story, as the time bending nature will allow players to play The Duviri Paradox even if they've not reached Warframe's later content. It's still being finalised but Ford mentions it could be accessible as early as completing the Second Dream quest, which is one of the first significant main quests in the game.

For Digital Extremes, its future seems to be vibrating with potential, as 10 years of growing success has put them on the precipice of even greater things. So this bridging of past and future seems apt for The Duviri Paradox. In Ford's capable hands, I feel more excited about Warframe than ever.

“My truest dream, and my heart, just wants to make awesome stuff with the people who have given Warframe everything,” Ford concludes. “I want to work with them and I want to make it awesome. To do a good job. That's it.” 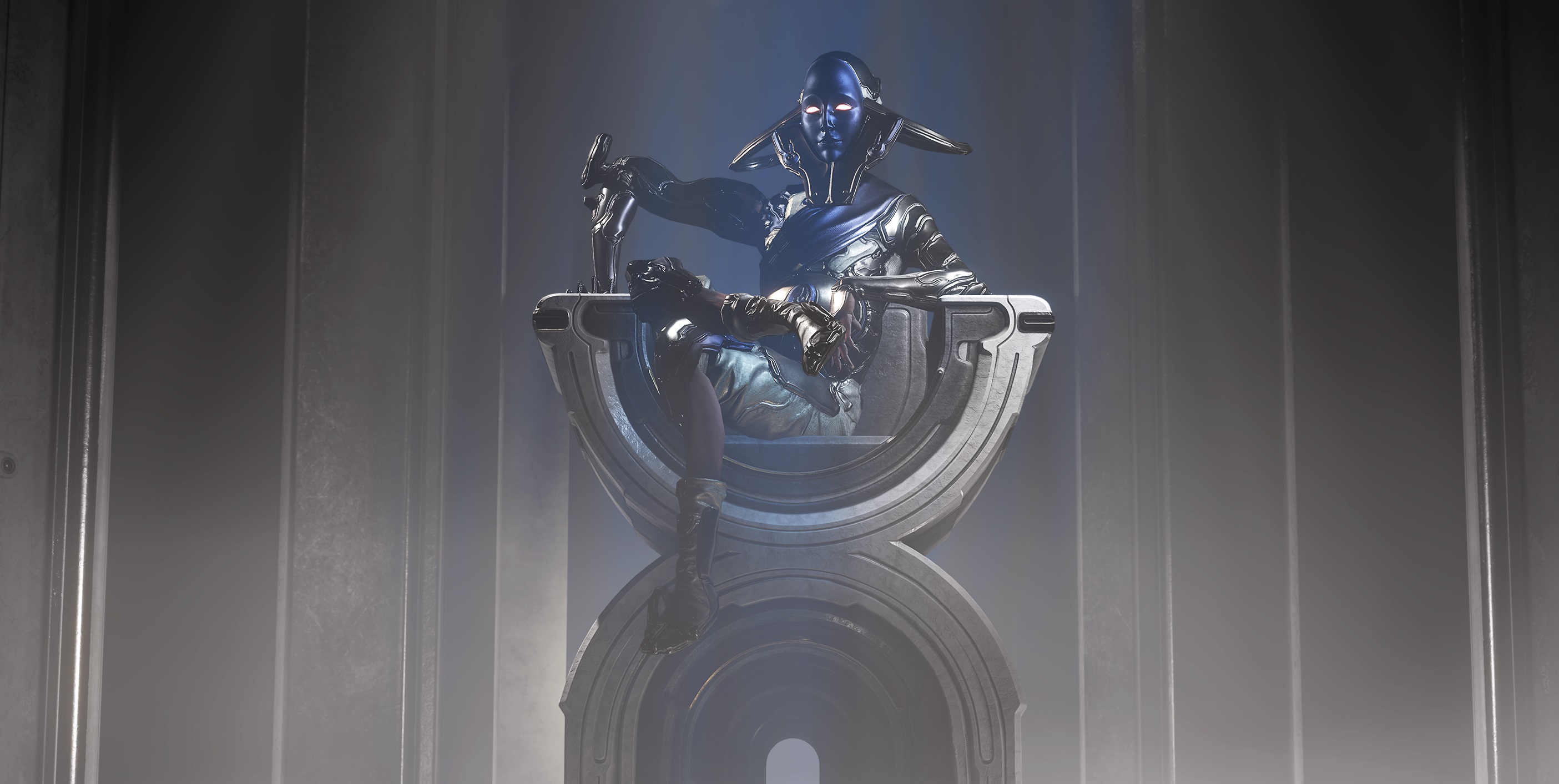 In 1986, EA published a game with a simulated model of every Manhattan block south of 110th