You can finally steer a horse with some semblance of accuracy in Red Dead Redemption 2 without using a controller, which feels worthy enough of mention all on its own.

You can even have key macros that toggle differently depending on how far or how many times you tap a key. Though these do take some getting used to.

There really are a whole bunch of uses for analogue keyboard inputs that are only a few clicks away with the Wooting 60HE. Not forgetting this board's ability to mimic an Xbox gamepad with left and right analogue stick functionality.

Admittedly it does take a while to learn how to not smash the keys as I would usually. That's true for even someone like myself that has used an analogue keyboard multiple times in the past. First, you need to break down the years of muscle memory telling you how to type, then you need to actually get to grips with how to best use the 60HE to get the most out of its uncommon feature set.

Though once you are familiar with the keyboard it's easy to get the most out of it while gaming. I also hold that some of its most useful features, such as Rapid Trigger, don't require you to adjust how you play all that much. Over time, I found I began feeling out the way to actuate the switches most effectively and I wasn't all that conscious of the change in play style.

There are four profiles that can be stored on the 60HE, and by default one of these is a more standard setup for typing. The others come set up for rapid gameplay (basically your FPS mode), racing games, and a more generic 'mixed movement' mode. That last one replaces your WASD with left analogue stick movement in controller terms. All of which can be swapped between easily through built-in shortcuts.

Below: The 60HE's Rapid Trigger feature is enabled; green is when a key is actuated, red is when the key resets.

The only issue I've run into so far while testing the Wooting is in F1 22. I asked Wooting for any information on what was happening and here's its response.

“F1 22 was going to add our Analog SDK support, but they must have pulled the plug somewhere without removing the malfunctioning code and now it's actually causing the game to crash. You will need to uninstall the Analog SDK from your PC. It installs when you install the local Wootility app. Otherwise, you can turn off Gamepad entirely, but that would defeat the purpose if you plan to use it.”

This analogue input is made possible by Wooting's impressive Lekker switch. These are smooth linear feel switches with a 100 million click lifespan, so as much a match for more traditional switches we're used to seeing in gaming keyboards, such as Cherry MX Reds. They also feature a similar cross-style stem as those popular Cherry switches, which means most third-party keycap sets will fit the Wooting 60HE.

Where these Lekker switches differ from Cherry's is that there's no metal contact point. Instead, these switches use a magnet switch harnessing the Hall effect for contactless operation.

All of which is very impressive, though these features are also shared by the Wooting Two HE, Wooting's first Lekker-powered keyboard. That said, there is more to the Wooting 60HE that impresses me about this model alone.

Quite simply, the 60HE is the best feeling keyboard that the company has produced to date. There's a respectable thud from every key when pressed, and the stabilisers have been lubed to keep them from chattering too much in use. It's relatively quiet by mech standards, helped along by sound dampening foam beneath the PCB. That's a hot-swappable PCB, by the way, though only replacement Lekker switches will work—a couple of spares are included in the box.

The compact case has absolutely zero flex and stands firm on the desktop with no hint of wobble. The lack of adjustable feet does mean you're locked in at the height and angle that Wooting has designed the 60HE to sit at, however, it is comfortable to type on nonetheless.

That's especially true when combined with the black soft-feel wrist rest, which is a $27 add-on at the moment (usually $30). This is a chunky wrist rest that really props up your wrists, which I've found surprisingly few wrist rests do quite as well as this. It's similar in its feel and effectiveness to those included with the Ergodox EZ, a high-end keyboard designed very much for ergonomic use.

The UK version I was supplied for this review comes with ABS shine-through keycaps as standard, though the US version comes with PBT caps. I've not tried them out personally, though I'd usually consider PBT to be the more premium option, so it's a bit of a shame not to see those offered globally. I asked Wooting for details on why this was the case, and it told me that “The main reason is that it's very expensive and difficult to get local language double-shot PBT keycaps with specific branding due to the high mold fees required.”

PBT keycaps should be on the way for Nordic, UK, and German layouts “soon”, anyways.

Above: with the Wootility app open you can see how sensitive the analogue inputs are and adjust them if necessary.

The ABS keycaps do light up wonderfully with RGB lighting enabled. Though the best bit is how Wooting's added a white backing board for the keycaps to sit inside, which reflects the per-key LEDs

Generally, the keyboard looks relatively plain and simple with the RGB disabled, though Wooting's signature has to be the massive strap attached on one side of the board. I don't imagine many customers will be using this strap for any practical means, but I do appreciate the touch of colour it adds. There are similar splashes of yellow around the board, including the four rubber feet and the included cable, which is braided in a very fitting black and yellow get-up.

For all its successes, and I do truly think this is a wonderful keyboard, I also posit it's not necessarily the right size for everyone. During work I find myself using a numpad a lot, and that's just not something that's setup by default on the Wooting 60HE. Similarly, the function keys are only available by switching layers via the Function key, much like you might find on a gaming laptop's keyboard. It's the same deal if you want to access the arrow keys.

But for any concerns I have about using a 60% keyboard, they're not exclusive to the Wooting 60HE and are commonly shared by all compact keyboards I've used. In customising the 60HE to suit my needs for gaming and work, it's actually one of the easier to do so with.

What the 60HE lacks in keys it makes up for in how easy it is to program them. The snappy Wootility software makes sure of that. The 60HE requires the latest version of the Wootility, V4, in order to work as intended. Though when you have the software installed it brings this keyboard to life.

I've spoken plenty before about how the Wootility is one of very few good gaming peripheral applications, previously noting in my Wooting Two HE review that “It puts some other larger manufacturers to shame with how easy and smart-looking it is.” It's also now available on the web, so you don't even need to install anything to use it.

$175, though it feels a fair price for what you're getting: a supremely well-rounded gaming keyboard with unmatched flexibility.

Though I will say if you're unsure about the 60HE's compact size, the Wooting Two HE is as fully-featured but not quite as petite. The full-size board is also available today for $173, whereas the 60HE is on preorder and likely to be fulfilled around October at the time of publishing this review. 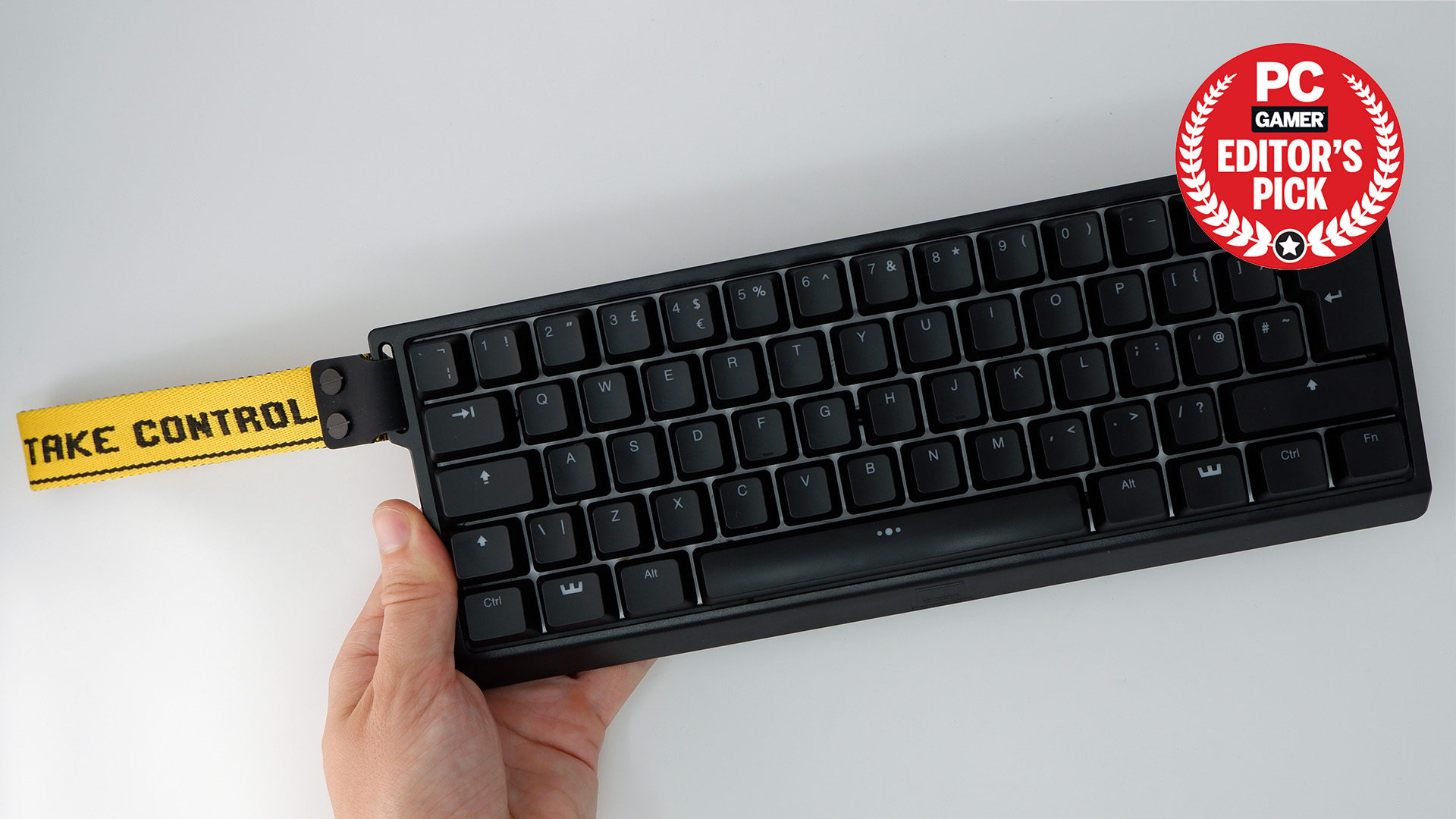