Richard Cobbett wrote Crapshoot, a column about rolling the dice to bring random games back into the light. This week, a Storm rises, a Gambit is played, and Wolverine's healing factor goes up against the best the Quake engine can dish out. (Turns out it's a bit over-rated.)

No, really. This isn't quite a game, but one of very few examples of a commercial Total Conversion—a mod that, as the name suggests, takes one game and turns it into another. They're common projects for modders, and even more common for modders to start and then give up on. X-Men: The Ravages of Apocalypse, however, was a boxed product, with Marvel's approval, that demanded potential players already had a copy of Quake to play it in. One game for the price of two, as it were. Just as surprisingly though, it's a game entirely about murdering some of its most iconic characters. Over and over and over and over and over. As Yoda would put it: “Begun, these Clone Wars have.”

The Ravages Of Apocalypse is set after the end of the world, because that's way easier to render than somewhere interesting. The evil Apocalypse, a villain whose commitment to his Egyptian theme doesn't extend as far as 'not building cloning tanks and stuff' has teamed up with a mysterious ally and managed to capture all of the X-Men so easily it's brushed off with little more than “He just did, OK? Shut up.” Who is that mysterious ally? It would be a massive spoiler to say it's Mister Sinister, so I won't. But there are a few clues for the observant, like the second of the game's two episodes (as in chunks of levels rather than 'here's part one, check back in a few months for part two') being called “The Downfall of Sinister Plans” and the God Mode cheat returning the message that Sinister has messed with that, you naughty cheater. Pointlessly, since the new cheat is in the Help and Readme.

(It's Logan, incidentally. But sadly, that's not the cheat you'll want.)

Unfortunately for Apocalypse, he makes one crucial mistake while cloning a subservient Wolverine, presumably using the same technology that allowed Logan to be on 70 different superteams back in the '90s. Apocalypse records his experiments on a video camera. Why he and his Unknown Ally Who is Mister Sinister are bothering to record this in the first place, given that the only two people on Earth who need to know about it are standing in the room, isn't a question deemed worth an explanation.

The fact they're recording it onto metallic oxide tape however turns out to be a bit of an oopsie, since it means Magneto, Master of Magnetism, can read it at will. At least, that's what he claims. In practice, it's not clear whether Magneto really could and actually did do this, or simply stole the tape and put it on his VCR like any other supervillain might. Or, for that matter, why the most powerful mutant around decides that a good response to this situation is to go “Huh,” and casually pass the buck to some jerk.

Yes, Magneto is the hero of this one, if only because “nobody conquers this world except me.” He's not the main character though, because this battle might take up a whole five seconds of his evening to completely solve—time put aside to sit in his chair, staring into space as if plotting his ultimate campaign, but really telemagnetically watching some old episodes of Here Comes Honey Boo Boo.

Instead, he deploys his latest invention—an experiment best described as NotCable. His real name is unknown. His underpants are unflattering. In the true spirit of the 90s, his hands are guns. Somehow, this is 90% less badass than it sounds, mostly because Magneto performs the operation while openly mocking him for wanting that kind of power in the first place, and kicks him out into the battle with little more than “Yeah, you might succeed.” And hopefully some trousers.

Spoiler: He absolutely will not succeed. For several reasons.

For the most part, if you've played Quake, you've played this—only with more action and nowhere near the design chops, not least because it was churned out in just three months. To give it credit, for the time, it does a fantastic job at visually recreating the X-Men themselves on an incredibly limited palette and a polygon count that struggles with a triangle. Unfortunately, that's where the good stuff stops.

For starters, the difficulty is beyond brutal, even on the easiest difficulty level. The X-Men—technically, the X-Clones—are all ramped-up versions of standard Quake monsters, which works variably well. Wolverine is the Fiend, leaping across the map and rending with his claws. Pretty smart re-use. Storm is the Scrag, floating above the battlefield and shooting down Shambler lightning. Others are pretty weak, notably Cyclops, who gets to fire the most pathetic little energy bolt.

Sadly, Rogue doesn't keep accidentally draining NotCable's uselessness with her powers, or randomly generating new levels on the fly. Though she does have permadeath, so that's OK.

Usually you encounter groups of the gang, who attack en masse and relentlessly. Worse, several have lockdown powers, and Iceman and Psylocke can both freeze you in place. Other attacks have insane knockback. There's never enough ammo, and even the best weapons are pretty weak in the inevitable pile-ups. Honestly, it's hard not to sigh at the fact that Magneto, Lord of Laziness, could sort out this entire situation just by slamming the clones up against the wall by their belt buckles, striding past, and then rudely yanking their trousers down as a parting shot.

What? It's not like Marvel was afraid of over-exposing its heroes at this point.

Again, it feels deeply weird having an X-Men game about wholesale murdering the X-Men. In multiplayer, you get to control one of the mutants in deathmatch (including a Powers Only mode), so it's not as if this couldn't have been more inclusive. There are some franchises where it makes sense not to play as the title character—Doctor Who for instance will work much better when creators realise that being the Companion works for that series, being the Doctor doesn't. This game though feels like it's ideal for someone who hates the franchise and wants to be knee-deep in the characters' gore. Or in the '90s, anyone who was pig-sick of Gambit. Which now that I think about it is just about everyone, making this arguably the greatest superhero game ever for as long as it takes to get bored of shooting him.

(And in case you were wondering, he's a rebadged Hell Knight, using a pole up front and hoping you'll pretend his fireballs are playing cards from a distance. One of the better models.)

The levels at least are more complicated than you'd expect, with multiple paths, some basic puzzles, and some new environmental traps that feel like an ancient pyramid built by the guys who made the ship in Galaxy Quest. Fire jets, steam vents, moving platforms… every now and again it tries for something more realistic, like an actually pretty well done X-Mansion starting area (if you ignore that all the doors are locked) and a devastated city, only to realise that corridors and caves are more its bag.

Weird things happen when it deviates from that template. Like this scene, where you stumble across a theatre like the one in Duke Nukem 3D, a comparison that doesn't exactly help crush the sudden worry that you just stumbled into the X-Men chilling out with some home-made mutant pornography.

The most annoying part of the game though is what you're meant to be doing, above and beyond making the X-Men look like cannon fodder. Both Apocalypse and his Mystery Ally are invulnerable to all attacks, which seems a bit unfair, with the exception being a weapon that has be gathered up while exploring the levels. If you don't get them all—and you don't get them with the All Weapons cheat—you're hosed.

While the game will warn you not to progress without the weapon piece, level-skipping renders the game unwinnable and it is possible to get to a boss without the complete set. At this point, Magneto's floating head appears to go “Oh, you silly…” and it's a good idea to imagine your character replying “Well, how am I even meant to assemble a superweapon with no hands?”

However, this being Quake, there's no backtracking. You miss a piece, fairly or by cheating a little—ahem—and you're hosed. The villains just laugh at your heroism. Or ignore it completely. Maybe they just have really good poker faces.

Because of this superweapon, and about 12 levels of this game being eleven and a half too many to wade through without a cheat code of some description, I don't know how this one ends. In my case, it ended on a platform with Mr. Sinister, with him occasionally teleporting around but otherwise completely ignoring every attempt to end the game.

This being the Quake engine, I think we can probably assume the ending is a cinematic masterpiece that would make Pixar's best artists put down their pens, silently drive to the ocean, and walk into the water until it covered both their heads and their shame at never having a hope of living up to its artistry.

Or possibly a text crawl/still image.

If you'd like to find out for yourself though, good news! While this was a commercial release back in the day, the developers released it for free a while ago, much like the monkeys in Outbreak released the plague, but never mind. If you've got a copy of Quake, just drop the files into the folder and run xmen.bat. It's also apparently compatible with this alternative engine, if you don't own Quake. The soundtrack's available separately.

For the time, the model work is actually pretty good. At the very least, it used a wider palette than Quake's default sludge brown and sewer green. Certainly, it's impressive when you consider that Quake proper tried to pass a snotty hankie off as a demon. And it's far from the worst X-Men game ever, given that LJN's The Uncanny X-Men for the NES still exists. So, you know, there's that. 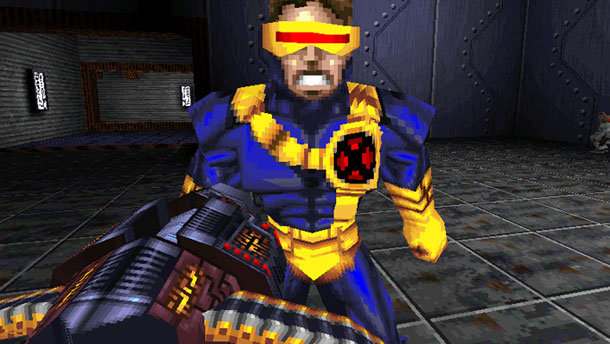