Last October, “Star Trek” actor William Shatner traveled into space at 90 years old. In his autobiography “Boldly Go: Reflections on a Life of Awe and Wonder”, Shatner revealed his emotional response at being in space – not one of wonder, but of immense grief. “The contrast between the vicious coldness of space and the warm nurturing of Earth below filled me with overwhelming sadness,” he wrote, discussing the destruction of Earth’s animals, flora and fauna. “I discovered that the beauty isn’t out there, it’s down here, with all of us. Leaving that behind made my connection to our tiny planet even more profound.”

Space travel and a life beyond our planet remains an exciting, aspirational prospect. But the simplest solution for humanity’s future, by far, is solving the problems we already have on Earth – rather than solely chasing a dream of life elsewhere while conditions here become increasingly unlivable.

In the story of KeokeN Interactive’s upcoming sci-fi adventure game, Deliver Us Mars (launching February 2, 2023), which is set in the near-future where Earth is in a deeply precarious environmental state, this subject is key. The broader story of the game is about the push and pull between colonists with ambitions to start a new life on Mars (a group called Outward) and those remaining on Earth who are trying to salvage their home. Those who attempted to settle on the Red Planet thought it would be easy – but it wasn’t. Early in the game, your protagonist, the young astronaut Kathy Johanson, arrives on Mars and you journey through Outward’s colony, uncovering the struggles they faced in surviving on this harsh new world.

This difference in perspective between the colonists and Earth’s population isn’t depicted as straightforward in our game: there are lots of different points of view on the morality of the Outward’s decision to leave the rest of humanity behind, and the player is asked to make their own mind up about who’s right and wrong in the story.

Kathy is at the center of this conflict in a lot of ways: her father joined Outward and abandoned her and the rest of his family years earlier. Kathy and her sister begin the game living on Earth, which is now ravaged by floods, storms and other effects of climate change. They plot a desperate mission to Mars to retrieve the ARKs: these are huge space shuttles that have the power to reverse the effects of climate change, and they’re how Outward were able to settle on the Red Planet.

For players who enjoyed Deliver Us The Moon, the first game in the series, this entry deepens the environmental themes of the story by tying the fate of Earth to a protagonist who has a personal motivation for journeying into space. Kathy wants to find the ARKs and save the planet – but she also wants to find her father. As she follows in his footsteps across the landscape of Mars, hoping to discover what happened to him, she uncovers evidence of the deep regret he felt at abandoning her.

The ARKs are probably the most fantastical part of the Deliver Us Mars story – they represent optimism about the future. One of these ARK ships contains a bio-printer, a fictional device that contains a vast library of DNA for Earth’s flora and fauna, giving humanity the ability to recreate extinct plant life. This nicely represents KeokeN’s approach to sci-fi storytelling: we use grounded ideas to give our game a dimension of reality, but we want to remain hopeful. Retrieving the ARKs would allow humanity to, maybe, wipe the slate clean on Earth – it’s a fantasy, sure, but it’s a meaningful one.

So, how does telling that story translate into how you play Deliver Us Mars? Well, Kathy’s journey across Mars puts her through a whole gauntlet of challenges – and the mechanics in our game support how that story is told. You’ll float through zero-G to explore an abandoned space station. You’ll dive underwater and cut through environmental hazards with a laser. You’ll traverse the red cliffs and icy tundra of Mars using Kathy’s climbing axes. You’ll use your smarts to solve puzzles and reactivate sections of the Mars colony.

Kathy’s story is brought to life by a fully motion-captured cast, who imbue this game with so much emotional depth and rich characterization. All of this is wrapped up in beautiful-looking visual and amazing sound design, all built to make the most out of your Xbox Series X|S.

While the depiction of humanity in our game is complex, the message about our planet in Deliver Us Mars is simple: despite whatever we dream is out there in space, we only have one home. 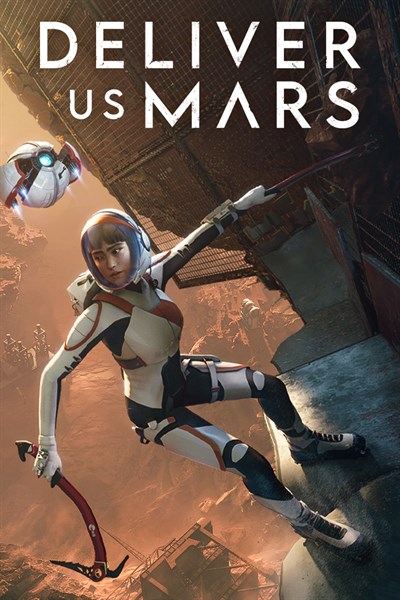 ☆☆☆☆☆
★★★★★
$29.99 $26.99
Pre-order
Pre-order now and receive a 10% discount. Sequel to the award-winning Deliver Us The Moon, Deliver Us Mars is an atmospheric sci-fi adventure offering an immersive astronaut experience. Explore new frontiers on a suspense-fuelled, high-stakes mission to recover the ARK colony ships stolen by the mysterious Outward. A BOLD NEW MISSION Ten years after the Fortuna mission, humanity is closer than ever to extinction. After a mysterious distress call from Mars, Earth’s youngest astronaut Kathy Johanson joins the Zephyr and its crew on one last mission: to recover the ARK colony ships stolen by the mysterious Outward, and with them, ensure the survival of the human race. OUT OF THIS WORLD GAMEPLAY Board the Zephyr as you journey from Earth to the surface of Mars. Traverse and endure its harsh and unforgiving terrain as you quest to discover the secrets left behind by Outward. Use both brains and brawn to overcome mental and physical challenges, find the ARKs, and uncover the motivations of those behind the distress call that brought you here. A HANDCRAFTED EXPERIENCE Experience a highly polished and absorbing narrative experience packed with engaging gameplay. Every moment is handcrafted, delivering a suspense-filled, emotion-fuelled narrative alongside music from award-winning composer Sander Van Zanten, state-of-the-art motion capture, and stunning graphics, powered by Unreal Engine. Deliver Us Mars © 2022 KeokeN Interactive B.V. All rights reserved. Published by Frontier Developments plc. ‘Frontier’ ‘Frontier Foundry’ and the Frontier logo are trademarks of Frontier Developments plc. All rights reserved. Deliver Us Mars uses the Unreal® Engine. Unreal® Engine © 1998-2022, Epic Games, Inc. All rights reserved. Unreal and its logo are Epic’s trademarks or registered trademarks in the US and elsewhere.