I grew up in a small town by the sea on the eastern side of Cuba. It was a simple, yet fulfilling childhood, where I spent my free time making jewelry from old buttons, tending to my cactus collection, and exploring the sand and waves. I attended the University of Havana, but it wasn’t until I moved to the U.S. and started my career in the tech industry as a web producer in Miami, Florida in the late 90s that I realized I had become part of a larger and more diverse community.

My role back then was to create original content and build digital experiences for Latin America and the Hispanic audience in the U.S. As I developed meaningful relationships with other Latino people and those in the United States with Latin American heritage, my social circle became far more diverse, representing a wide range of rich cultures. Five years later, I moved to Redmond, Washington when I was hired by Microsoft to launch and lead MSN Latino, the Spanish version of MSN for the U.S. Once again, my personal identity expanded, and I was able to experience the difference in the Hispanic demographic between the West and East Coast. Over time, my accent changed. My vocabulary changed. Despite the differences, I developed a deeper appreciation for what Hispanic people have in common: our shared family values, our strong work ethic, our traditions, and our sense of responsibility. Today, I identify not only as Cuban, but Latina and Hispanic American.

In 2012, I joined Xbox as the Director of Programming for the Latin American region. My team was responsible for curating and publishing localized content for our passionate Xbox audience. The first console release I was part of was the Xbox One. It was a thrilling experience to travel across Latin America and directly connect with gamers just after the console’s release. Currently, I lead a multidisciplinary team as the General Manager for Customer Experience with Microsoft Gaming. Next year, I’ll celebrate 20 years with Microsoft.

I am proud to represent Latinas and women in leadership. Paving the way as a foreign-born woman in a male-dominated industry has been no easy task, but gratefully Microsoft has given me the opportunity to work with leaders who value diverse perspectives and who see my potential. I am proud to be a part of Xbox’s evolution from being a console-centric business to a player-centric business which has allowed us to bring the joy and community of gaming to many more players and communities around the world outside of the traditional console markets. I’m also proud of that little girl, exploring the warm shore in Cuba, who dared to dream big dreams.

I am honored to celebrate Hispanic Heritage Month with Xbox. For me, this time is about celebrating our rich culture as Hispanic and Latino people in America, whose identity has changed and expanded to include not only our countries of origin, but the identities of other Latin American cultures and American culture as we are woven together in a tapestry. It’s about raising awareness and recognizing the positive impact our community has made Hispanic Heritage Foundation – HHF’s mission focuses on education, workforce, identity, and social impact through the lens of leadership and culture.

Xbox gamers can earn Microsoft Rewards points in various ways, such as playing or purchasing games after downloading the Microsoft Rewards app on Xbox. Earn points and redeem them for real rewards. Join us today and give with Xbox.

For Hispanic Heritage Month, the Xbox Ambassadors team asked Hispanic and Latino Ambassadors about the importance of seeing themselves represented in games and how it impacts their own experience as members of the gaming community.​​

Here are their stories.

Undoubtedly, Hispanic characters have made a mark in my gaming trajectory. I will never forget Dominic Santiago and Kait Diaz from the Gears franchise. Most recently it gave me great pride to see Mexico featured in the most recent Forza Horizon 5. Additionally, I really enjoyed the Far Cry 6 soundtrack where many artists from Puerto Rico are featured and the lead character even sings along to the songs while operating vehicles.

I founded Xbox Live Puerto Rico in 2010. 12 years later we are still going strong with a great team of Xbox Ambassadors administrators giving our local community great information, event coverage, and assistance when needed. Our main goal right now is to get Puerto Rico included in the Xbox Rewards Program so our community members can enjoy their points and perks.

The US Xbox Marketing team is partnering with students from the Boyle Heights Arts Conservatory in Los Angeles to create a series of videos showcasing and celebrating Hispanic and Latino art, food, fashion, community, and esports. The aspiring BHAC students will participate in the production and storytelling of local creatives including Chef Wes Avila, President of the Gamers of Color Club, Nyah Serrano, artist/muralist, Downtown Daniel, and fashion/graphic designer, Francisco Reyes, Jr (aka Never Made) and will launch in early October.

Explore Games Curated by Hispanic and Latino Communities at Microsoft

Games provide a unique form of storytelling and it’s powerful to see and celebrate the contributions, achievements, and experiences that the Hispanic and Latino communities bring to gaming. Now, more than ever, members of the Hispanic and Latino communities in the tech industry are able to express their own personal stories through games. We will highlight the voices that bring a rich and vibrant history to life through authentic storytelling and inspired creativity.​​​

​For Hispanic Heritage Month, we want to highlight Hispanic and Latino creators, lead characters, and games inspired by the culture and locations of the Hispanic and Latino communities around the world. This collection is available on Xbox, Windows, Mobile, and the Cloud year-round as part of our ongoing work to create more inclusive gaming ecosystems and elevate content that resonates with communities while increasing awareness of their unique perspectives and artistry.

Moonglow Bay (Available with Xbox Game Pass) – Moonglow Bay is beautifully art directed by Lu Nascimento, the co-founder of indie studio Bunnyhug Games, who identifies as a queer Brazilian. This cutesy game allows you to take on the role of a fisher and unravel a heartfelt story in a LGBTQIA+ friendly town. ​

Dandy Ace (Available with Xbox Game Pass) – From Brazilian developer Mad Mimic, comes the tale of a flamboyant magician named Dandy Ace in a fast-paced roguelike adventure. Dandy Ace uses his magical cards to fight and loot his way out of imprisonment within a cursed mirror. ​​

The Walking Dead: A New Frontier (Available with Xbox Game Pass and Rated M) – Face the apocalypse as Javier “Javi” García, a former baseball player on a mission to find his Cuban-American family. Decide how the story should play out in this narrative adventure as Javi teams up with Clementine in an attempt to survive long enough to rescue their respective families.​​

In partnership with Hispanic and Latino communities at Xbox, we’re introducing a new gamerpic, profile themes, and avatar items! The gamerpic and profile theme will be available on console and the Xbox PC app. Get your avatar items here.

Minecraft Education partnered with the Hispanic Heritage Foundation on a new Minecraft learning experience to inspire and equip students to become changemakers. LatinExplorers: A Hispanic Heritage Journey will build actionable leadership and social emotional skills with guidance by impactful real-life Hispanic leaders through three powerful narratives about climate, care, creativity, and community. Young learners explore how to connect personal passions with careers and workforce opportunities in the future digital economy. This content is available now in 29 languages in Minecraft: Education Edition and Bedrock via the Minecraft Marketplace.

Do you enjoy snapping in-game photos? Do you like creating unique livery designs for your virtual car collection? The Forza team invites you to share your creations that celebrate the environment and culture of the Horizon Festival in Mexico, honoring the real-world Mexican landmarks, nature, buildings, and art that can be explored in-game. These weekly photo and livery contests have specific sub-themes to inspire your creations:

We’ll feature our favorite community creations on the official Forza Horizon accounts, and award in-game items to the winners of each weekly contest as well as to any and all participants who submit eligible creations! Here’s more information on how to participate.

In celebration of Hispanic Heritage Month, Xbox Plays will be dedicating much of our livestreaming content in September and October to Hispanic communities, featuring streamers/content creators! Follow us on the Xbox Twitch Channel and don’t miss any of the action! 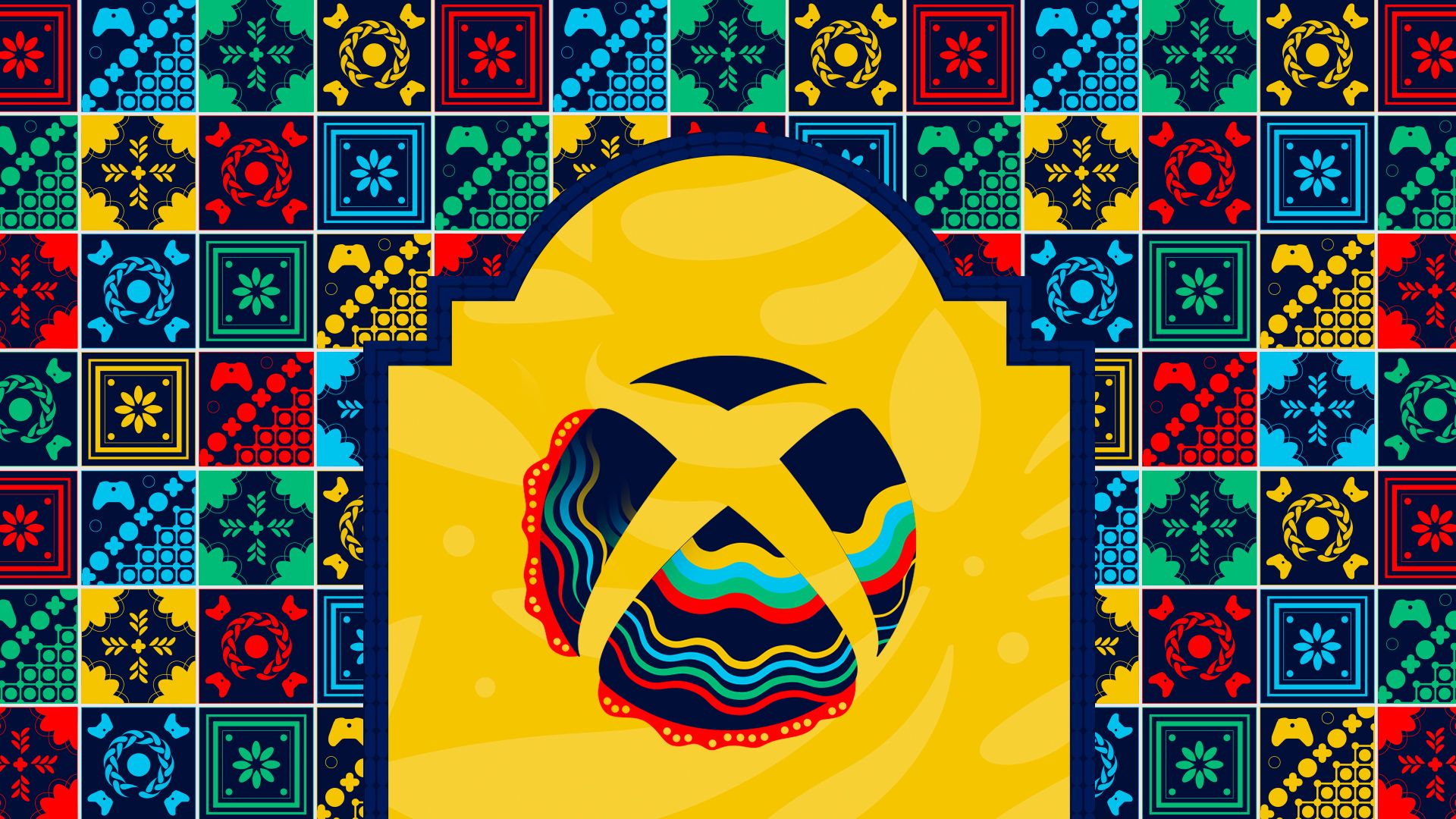 Saturnalia, An Indie Horror With An Art Style You Have To See, Captures October Release Date